Come in !  I thought you'd never get here - you know where the coffee is - help yourself - I've got things to talk about :)

It started with a hair.
A single wayward hair growing on my chin.
I plucked it off and forgot all about it - until the next time I noticed it - by then it had a mate.
And they were reproducing faster than rabbits.
Since my eyes no longer work like they once did - I have to put glasses on and try to peer down through them ( and not under them - which is what usually happens when you peer through glasses - leaving the whole attempt futile )
I snatch those babies up as quickly as I can but they're on a quest to multiply as quickly as possible.
They're like the Duggar family of Chin Hair !
It seems like every one I get - 4 replace it.

Human overpopulation occurs if the number of people in a group exceeds the carrying capacity of a region occupied by that group. Overpopulation can further be viewed, in a long term perspective, as existing when a population cannot be maintained without the rapid depletion of non-renewable resources or without the degradation of the capacity of the environment to give support to the population.[1]  WIKIPEDIA

OR IN MY CASE

Hair overpopulation occurs if the number of hairs in a group exceeds the carrying capacity of a chin occupied by that group.
Overpopulation can further be viewed, in a long term perspective, as existing when a population cannot be maintained without the rapid depletion of non - renewable resources or without the degradation of the capacity of the environment to give support to the population [ 1 ]  SUZANAPEDIA

I LIKE baby talk - and I happen to excell at it.

Want to meet him? 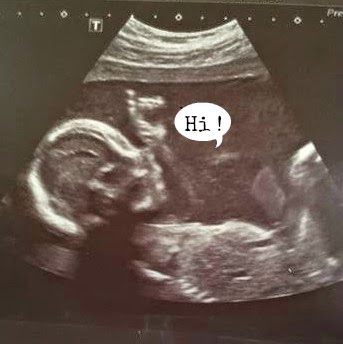 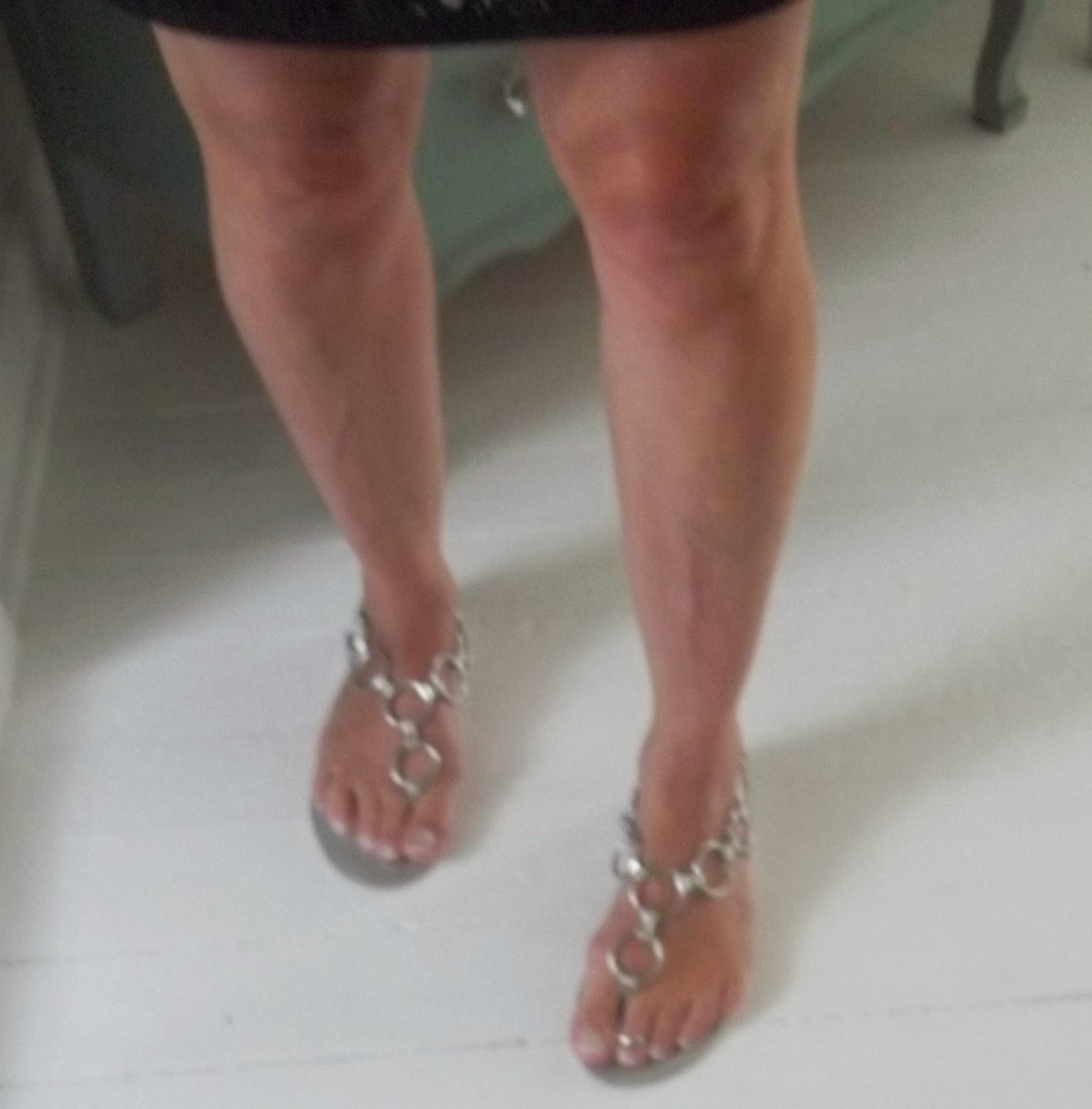 I slipped into them to wear them to my daughters for my birthday last week.

I'm an optimist and I feel if I start dressing like it's summer it'll come quicker. 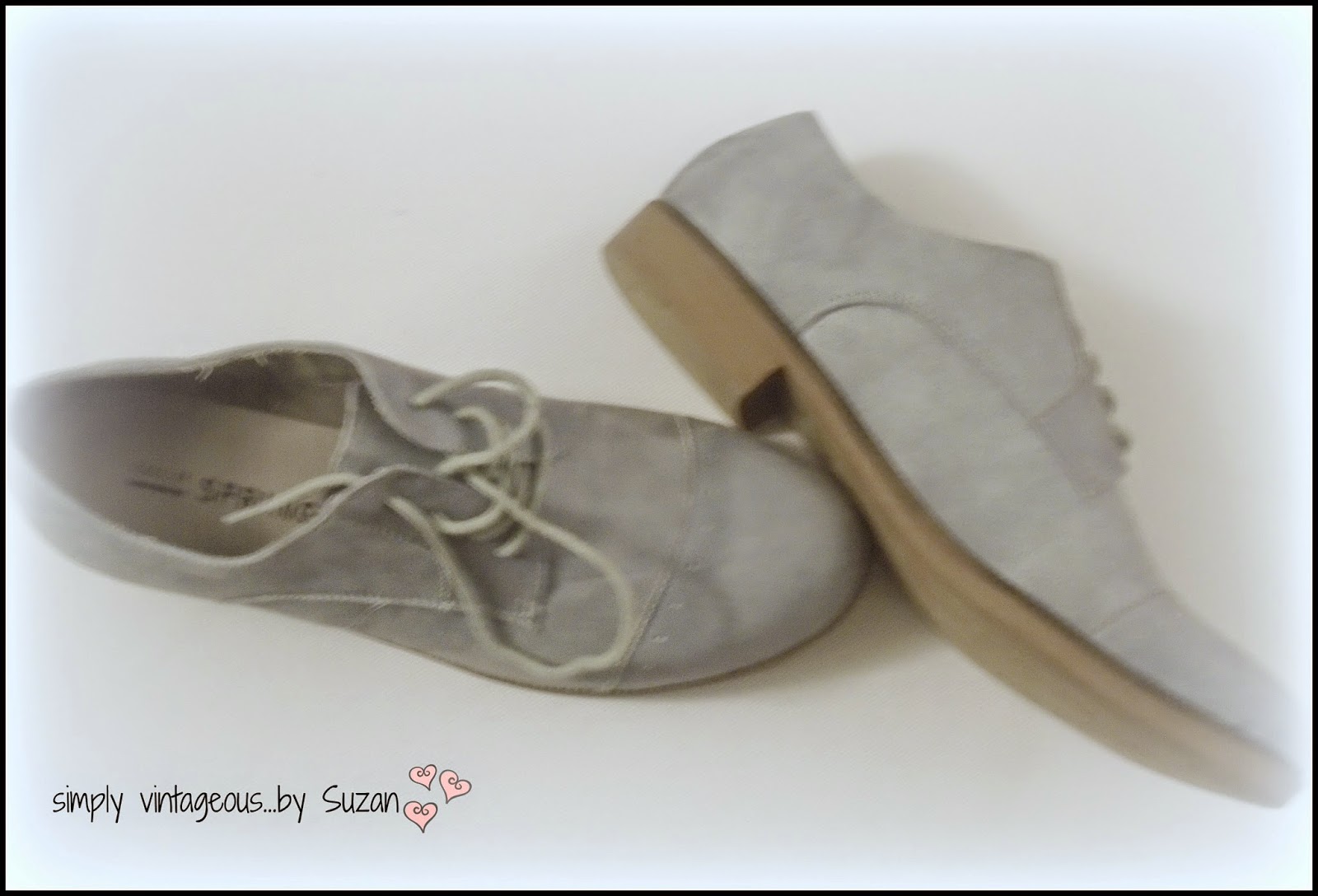 Yep - he went there

I've finally convinced John that I need the TV on to sleep - I can't stand the quiet.
It took many many many years to convince him of this.
It took till menopause actually - when for some reason he just sort of started caving in to my wishes ( as brushes were flying across the room in temper tantrums )
He always goes to bed before me - so I have to run in and make sure he leaves the t.v. on - because once he's asleep and I turn it on all hell breaks loose.

John yells out - WHY DOES THE VOLUME HAVE TO BE ON IF YOU'RE NOT IN THE ROOM?
Suzan says - For when I DO come in the room - obviously
John says - IT'S LIKE LIVING IN AN INSANE ASYLUM

John had an operation about 15 years ago to stop his snoring.
It was extremely painful - he couldn't swallow for days - I would make him strawberry milkshakes and even the miniscule seeds would make him flinch.
That man would have leapt off buildings for me at one time -
Anyway it worked up until a couple of years ago - the snoring has resumed - ( the T.V. and Fan help diminish it )

Until ........................
One night I was startled awake by a horrific noise.  It sounded like a 2 ton hog letting out a very deep and very loud gutteral snort actually.
I jumped up to see John calmly laying there watching T.V. ( his hair blowing all over the place from the fan )
Suzan says - Please don't tell me that came from me?
John says - Well it wasn't me and it wasn't Soda.
John says - You do it every night.

This week on TLC
The Top Ten " My Strange Addiction "

I won't bore you with all ten - just a few that shone !

A young man in love with his car - who admitted to his Dad that he was having an intimate and sexual relationship with the said car - the car's name is Shane - so I suppose that makes him a GCL
( Gay Car Lover ) I fully support people who love cars - and I fully support the Gay community - but I'm having a difficult time reconciling the two together for some reason - but I digress.
Shane - the car -  appears to enjoy being rubbed and stroked..................
" Well " his Father said " Did you ever think of speaking to someone about this ? "
" I don't mean that in a mean way " he continued.
Because no parent wants to be seen as mean on national t.v. - we all know what he said when the camera stopped rolling.
The young man told the camera that he was quite pleased with his Father's reaction.
Car huggers, pfffft.

Then there was the couple who give themselves coffee enemas several times a day - every day.
Apparently it leaves them feeling euphoric !
I think Folger's should contact them - this could be huge in the advertising world !
Next thing we know Starbucks will have an enema station beside the cream and sugar.
Latte enema?
Mocha ?
Cafe au Lait?

A girl who eats mattresses.
She's consumed 8 of them over the course of 20 years.
As her Mother's in the shower - she slips in sneakily  ( well as sneakily as you can do it with an entire camera crew ) and starts nibbling away.
Upon coming out of the shower - the Mother is horrified to discover that her mattress keeps getting smaller and smaller !
I'd personally rather have my mattress eaten than have 10 strangers in my bedroom with cameras and mikes watching as I step out of the shower - but that's just me.
She finally convinces her daughter to seek help with this affliction.
We next see the daughter at the Doctor's office where she explains  that this addiction produces a lot of gas.
Sulphuric burps are her exact ( and quite professional ) words.
When the Doctor looks a little confused she puts it in laymen's terms
" Mouth Farts "
And that sentence?
I. WILL. NEVER. UNHEAR. IT.
Neither will the Doctor.
Or probably you for that matter.

There was also the young widow that walks around carrying her husband's ashes everywhere she goes.
One day after opening the lid, she noticed her fingers had ashes on them -
What to do?  What to do?
She couldn't just wipe them off - THAT WAS HER HUSBAND, don't you know?
And so she really had no choice but to lick them off - and consume them.
Well one thing led to another and now she's horrified - because she's eaten a pound of him.
And since there was only 6 pounds to start off with - TLC quickly did an estimate for us that within a year there'll be nothing left.  ( thank you TLC - if there's one thing I hate to do - it's to run and grab a calculator at a riveting part of a show )
Her Mother threatened to take the box off her and things got very tense in that household, let me tell you.
She ran into the bathroom and locked the door - and while her Mother searched for the key to unlock it we could hear the box being opened and paper crinkling - like a bag of chips ( or maybe it was hips )
I'm sure she had a little snack in there - just to tide her over.
" BACK OFF ! " she warned her Mother as she came out of the bathroom - and sidled past her with the box clutched to her chest.
Fascinating stuff................my heart was pounding - my palms were sweaty - will she eat the entirety of her hubs?
Will there be a part 2?
And most importantly does she realize what happens to things we consume?
Her Husband's going to end up in the toilet bowl................literally.

And I don't know what happened - I only know that once every 5 years or so -  I go ballistic - apeshit - crazed with frustration and anger - you don't want to be around me when it happens.
I lose total control over my mouth - my body - and it must have been 5 years since I'd done it because
WHAM -
I started sreaming and yelling at the top of my lungs -
John died a little that day.
I was pointing my finger in the man's chest - calling him every name in the book -
Went back to the hotel ( across the street ) and started screaming and yelling at the manager - ran back to the garage and threatened to call the police -
Meanwhile a crowd was starting to gather ( all of whom were taking my side )
A man on a cell phone stood not far from me - a lawyer apparently - chatting on his phone
" God, I love New Yorkers " he told the other end.
" I'm a Montrealer " I snapped.
" I love them too " he quickly replied - LMHO
He stepped in and tried to argue my case............to no avail.

Have a wonderful weekend everyone,
Hope you all have at least one moment like this

I finally found the grey I'd been searching for ( for the past year ) and I couldn't wait to get started. I painted the wall off the front door ( we have 2 front doors because of the closed porch - this is off the interior door )
I had originally painted it a griege color ( which I love ) but like grey it can be so iffy with different lighting ( this house is dingy - there's no other way to put it - I was going to say " light challenged " but dingy seems more apt ) 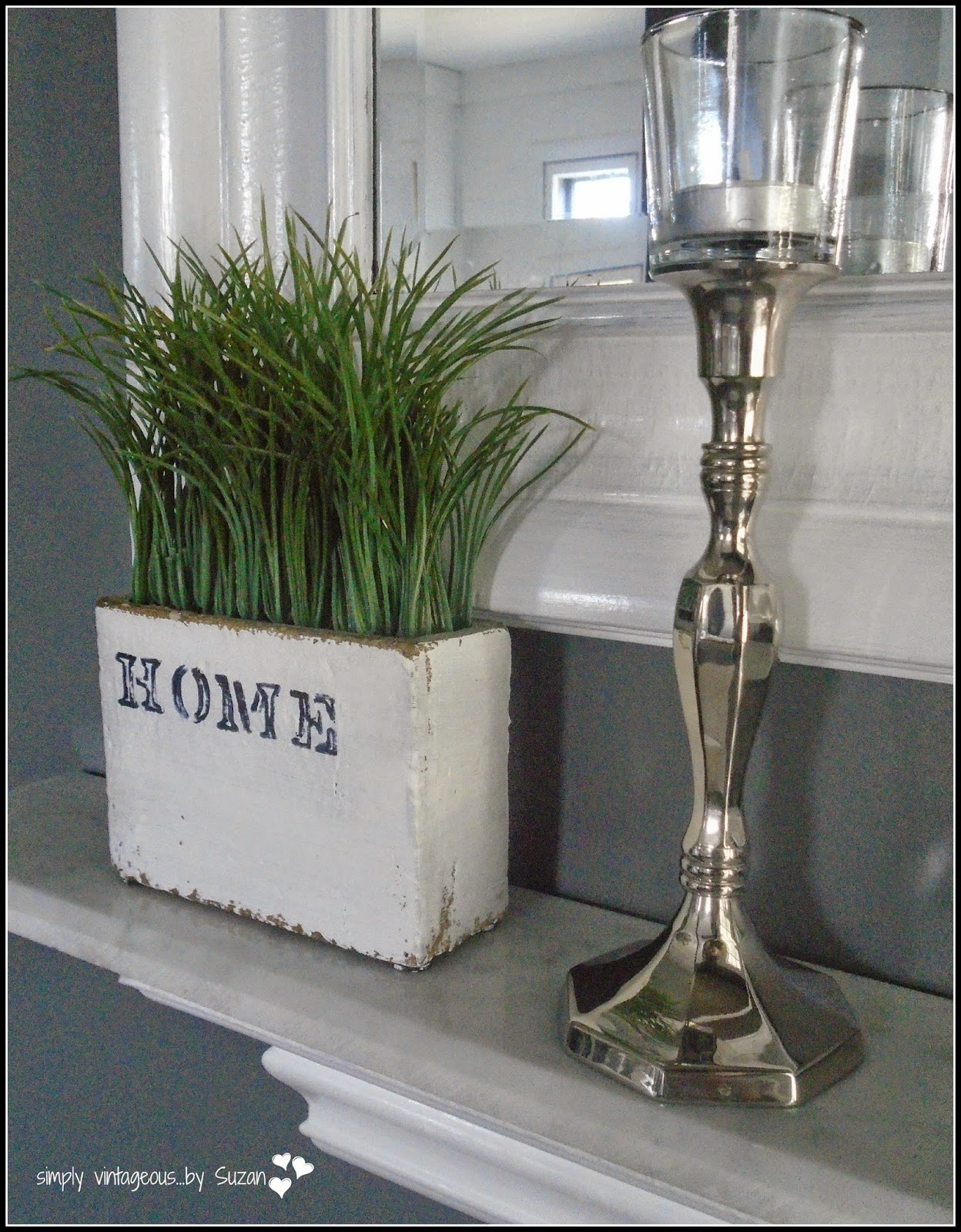 It changes colors when I stand in different spots because of windows ..............but this next photo is as close as it looks for most of the day 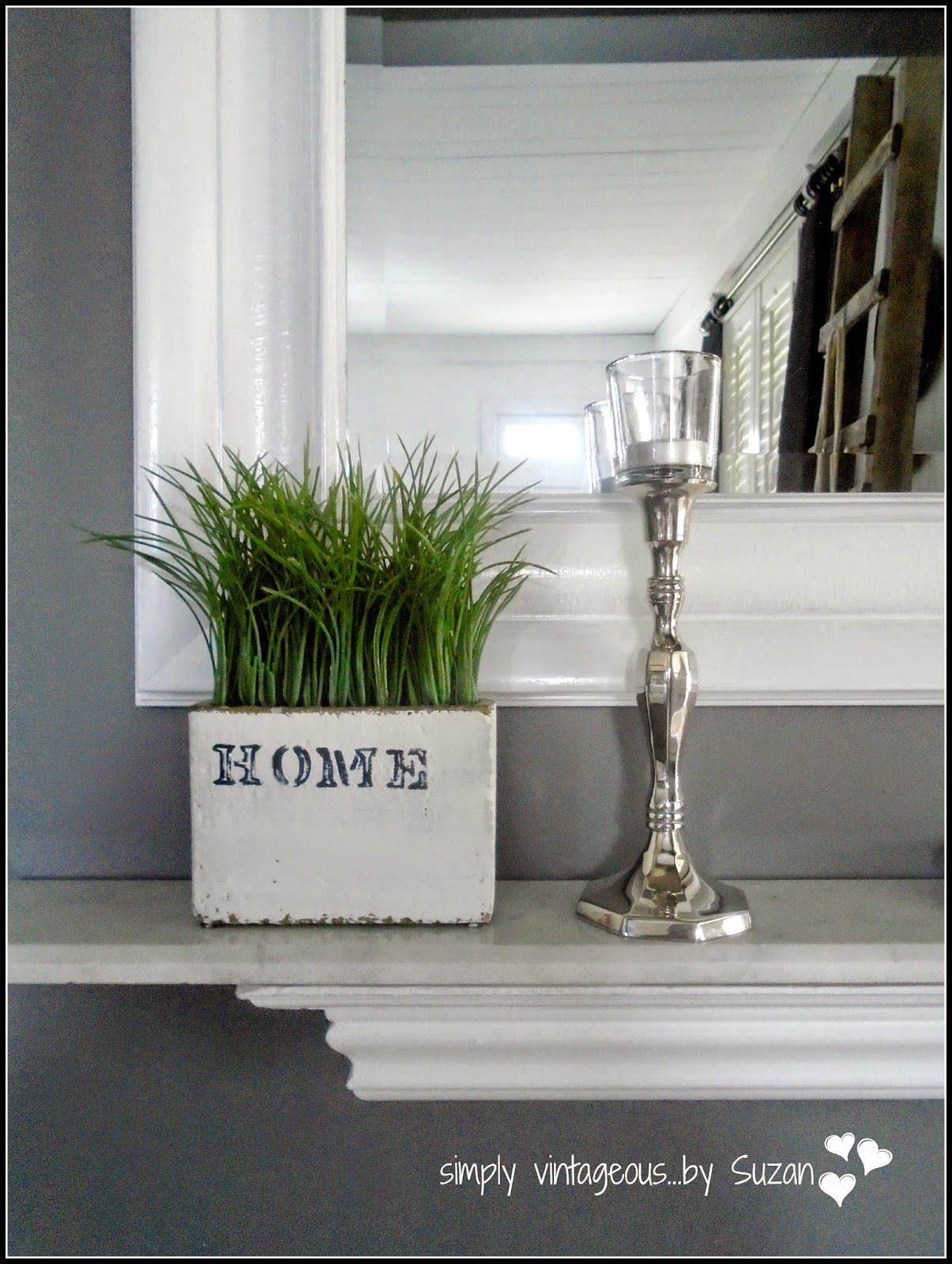 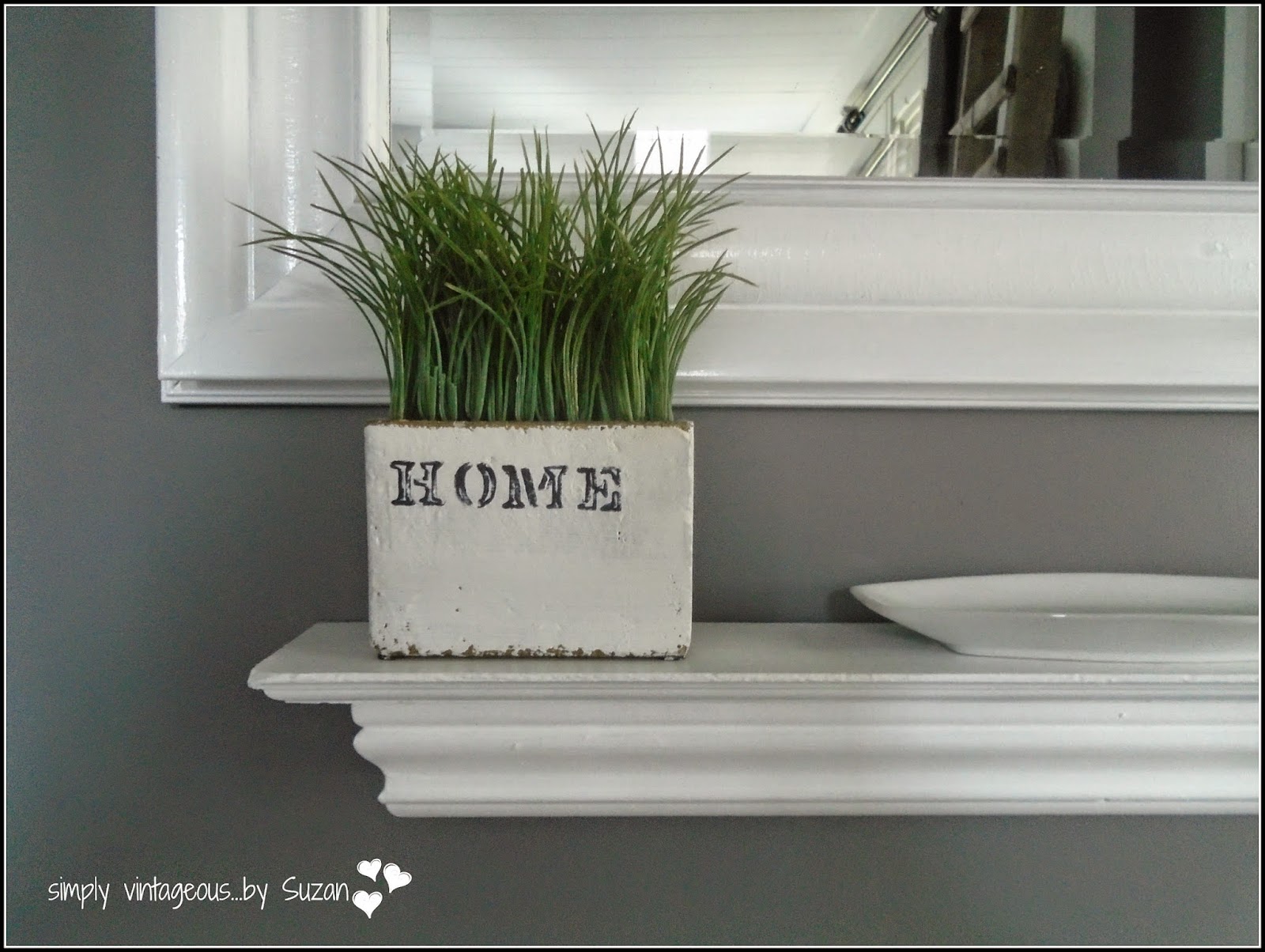 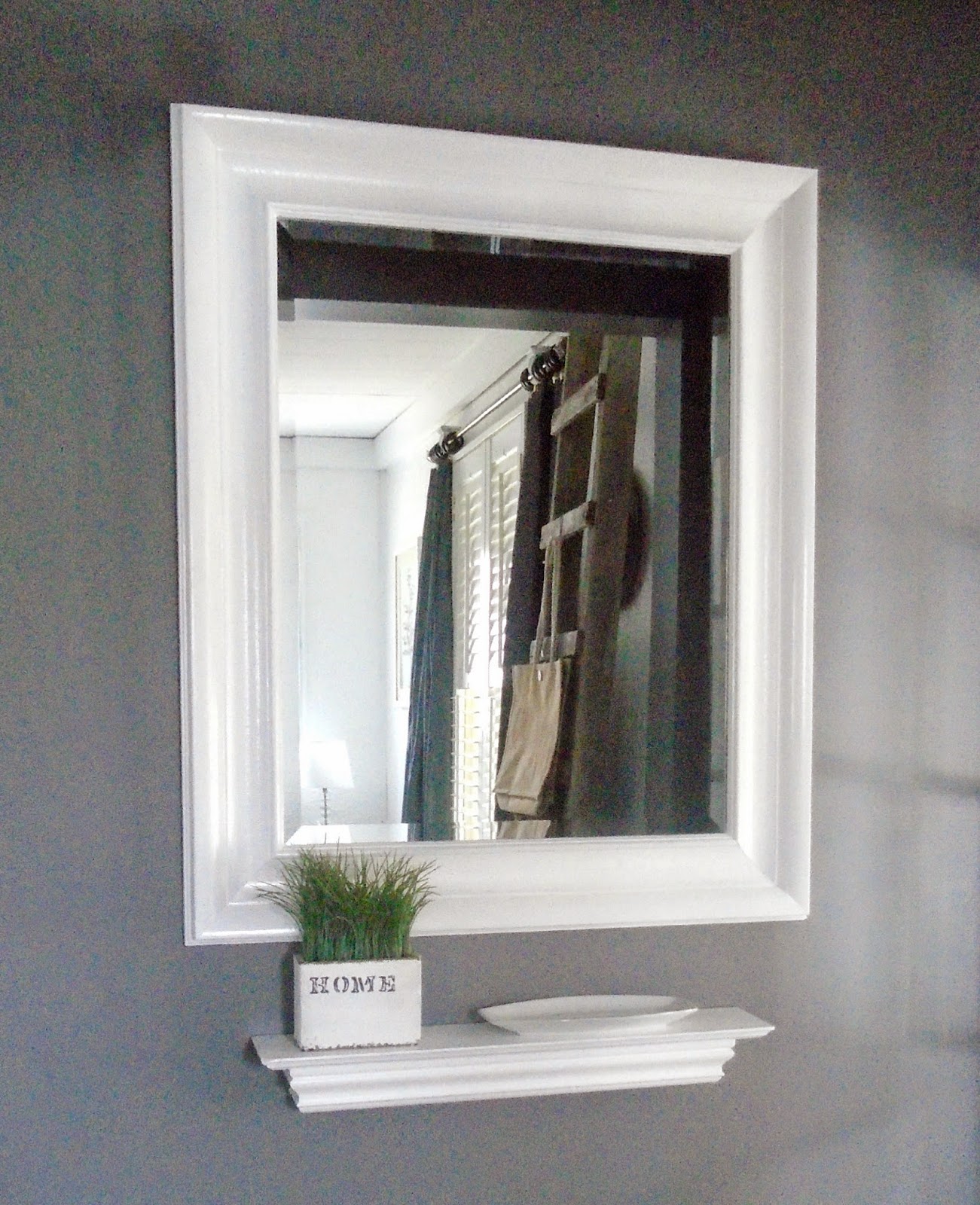 I checked online - but the larger ones were larger in depth too - and I needed this shelf to be very narrow in depth because this is the wall the door opens on to and this shelf was perfectly sized - just not long enough
And then I had my Ah Hah moment ( Thank you Oprah - what did we call them before ? )  I mimicked what I did under the kitchen window - HERE 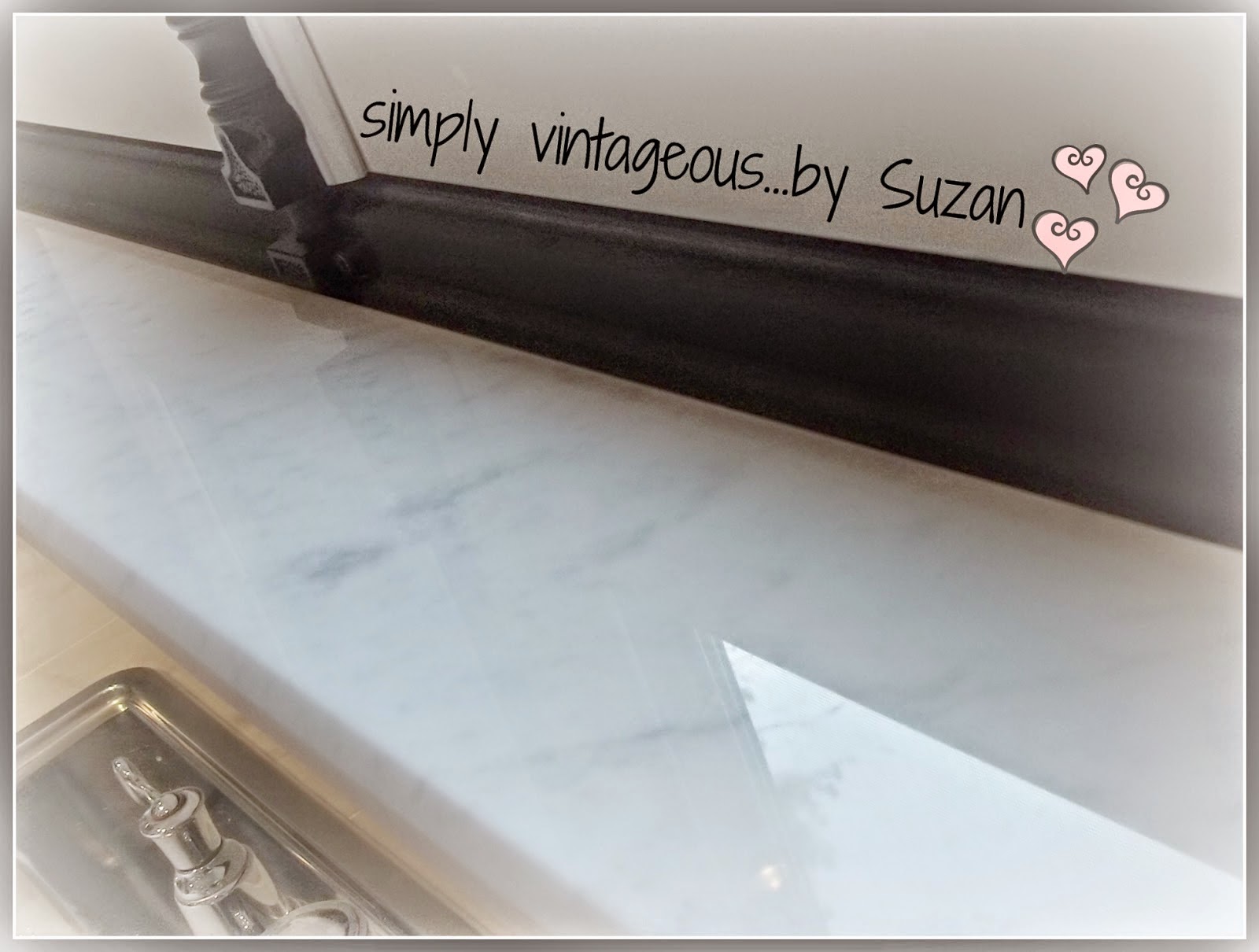 and added a marble threshold once again  ( the slab that goes on the floor between a bathroom and hard wood in case anyone doesn't know what I'm talking about )  and voila - it brings it all together and adds a little touch of glamorous marble where you wouldn't expect it ! 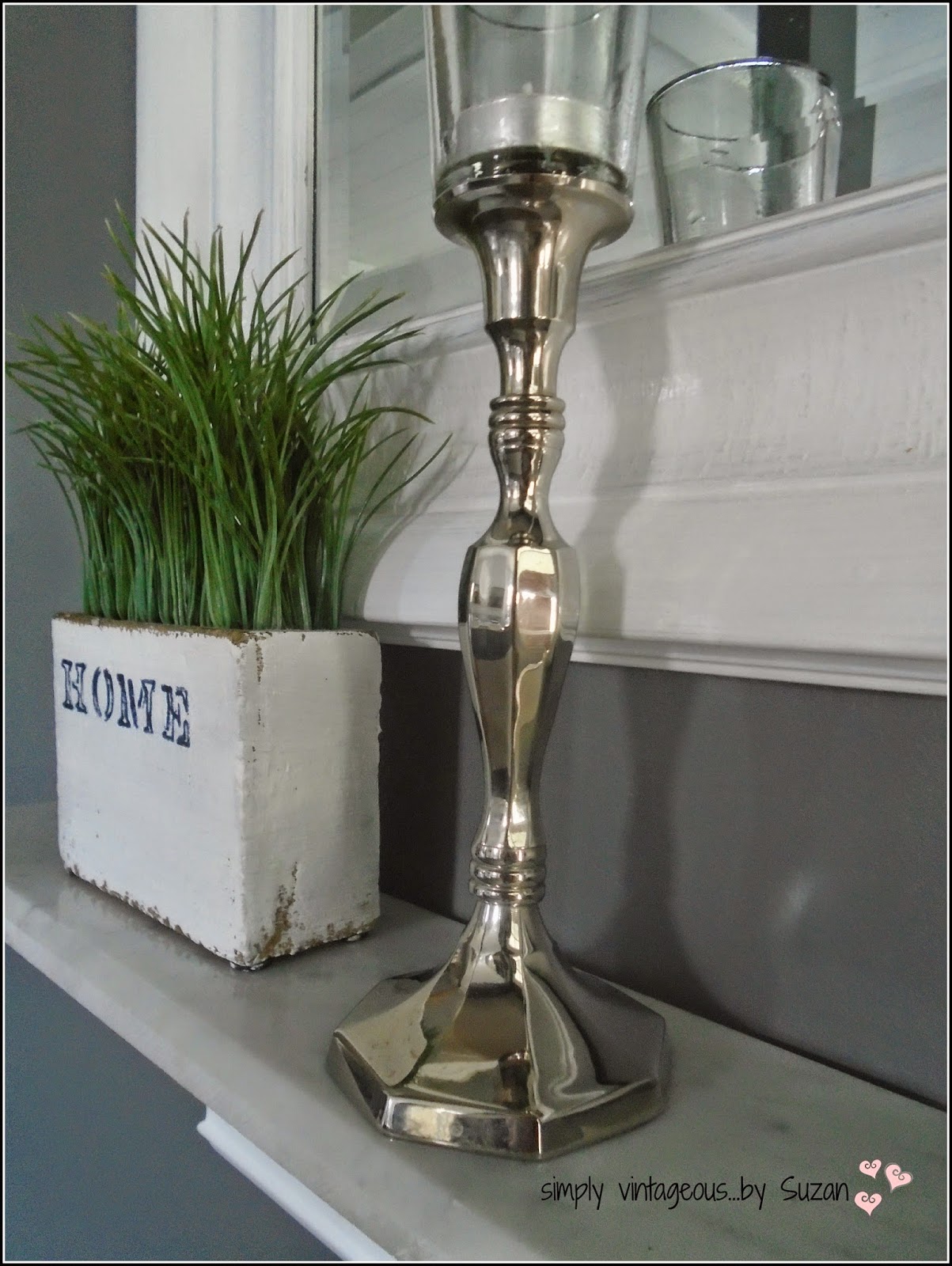 It's the perfect spot for John to drop his keys - so that we don't have to spend hours looking for them ! 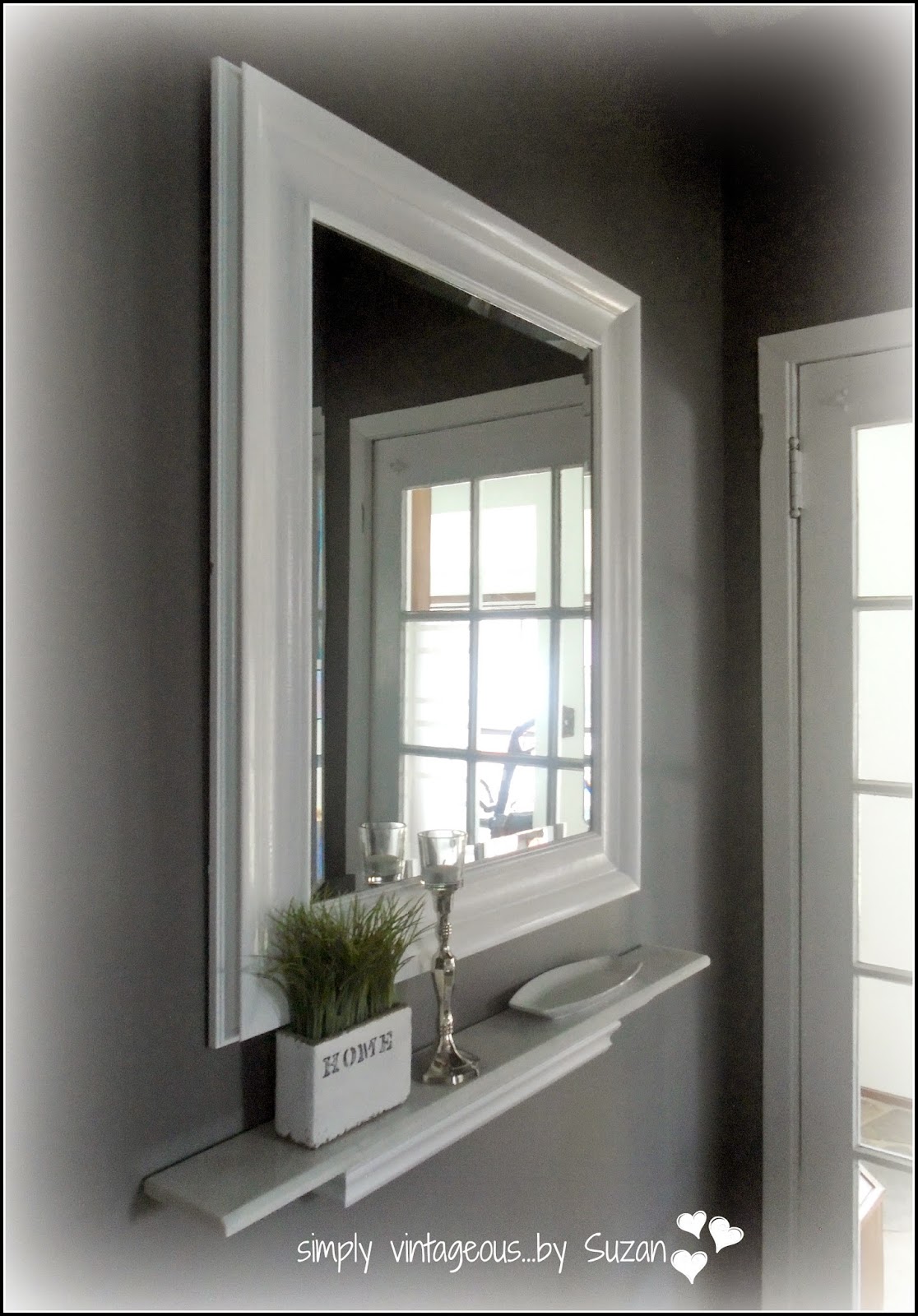 And the door opens and closes perfectly 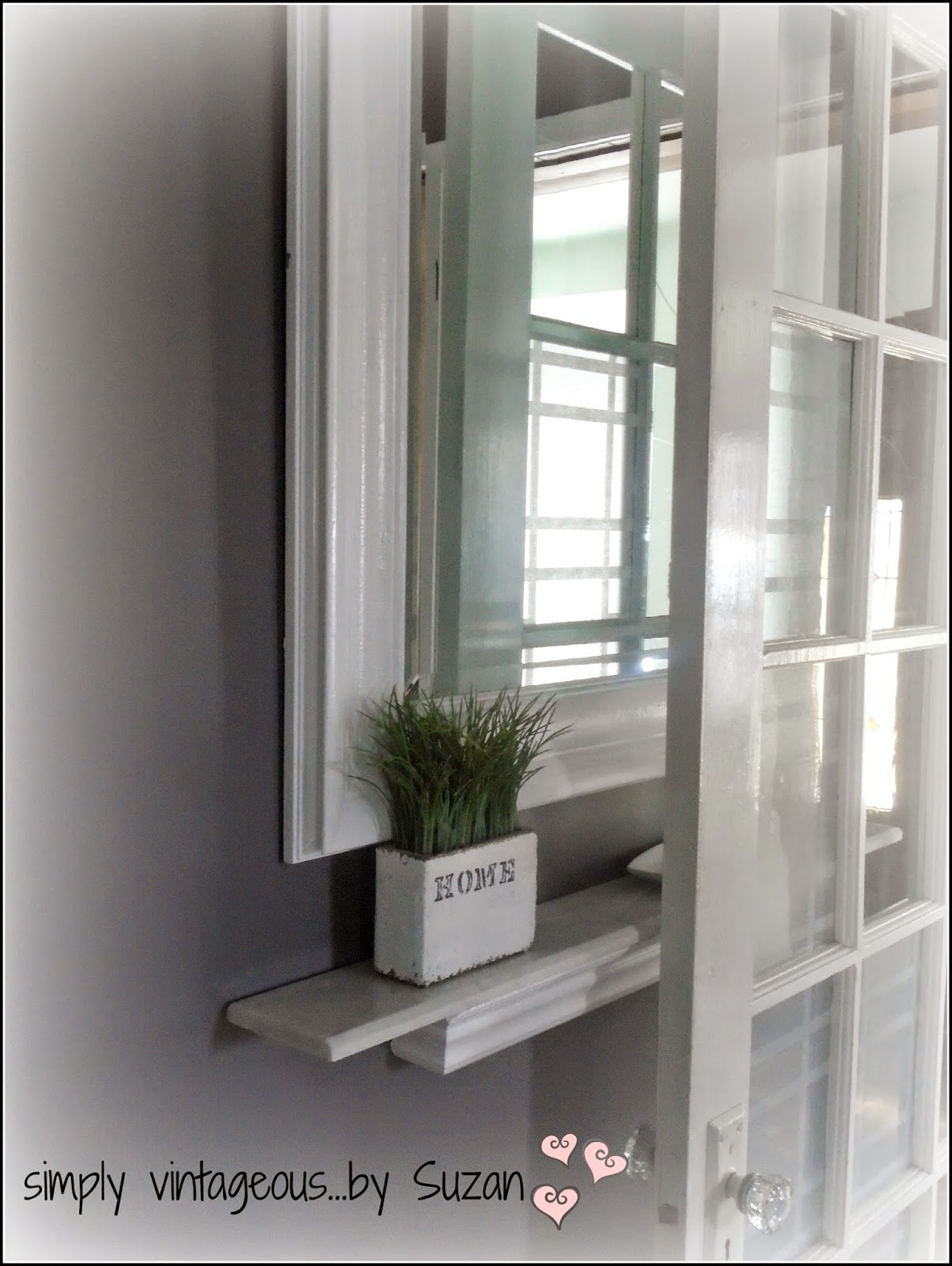 And now for the grand finale !
We all know I have the crappiest camera in Bloglandia ( but every penny seems to be eaten up by this
fixer upper of ours so it'll be a little while yet before I can justify spending big bucks on one ) and Pic Monkey can only go so far - BUT I FINALLY GOT A TRIPOD !!!
It's actually a quatropod because it has 4 legs ( for better stability ) 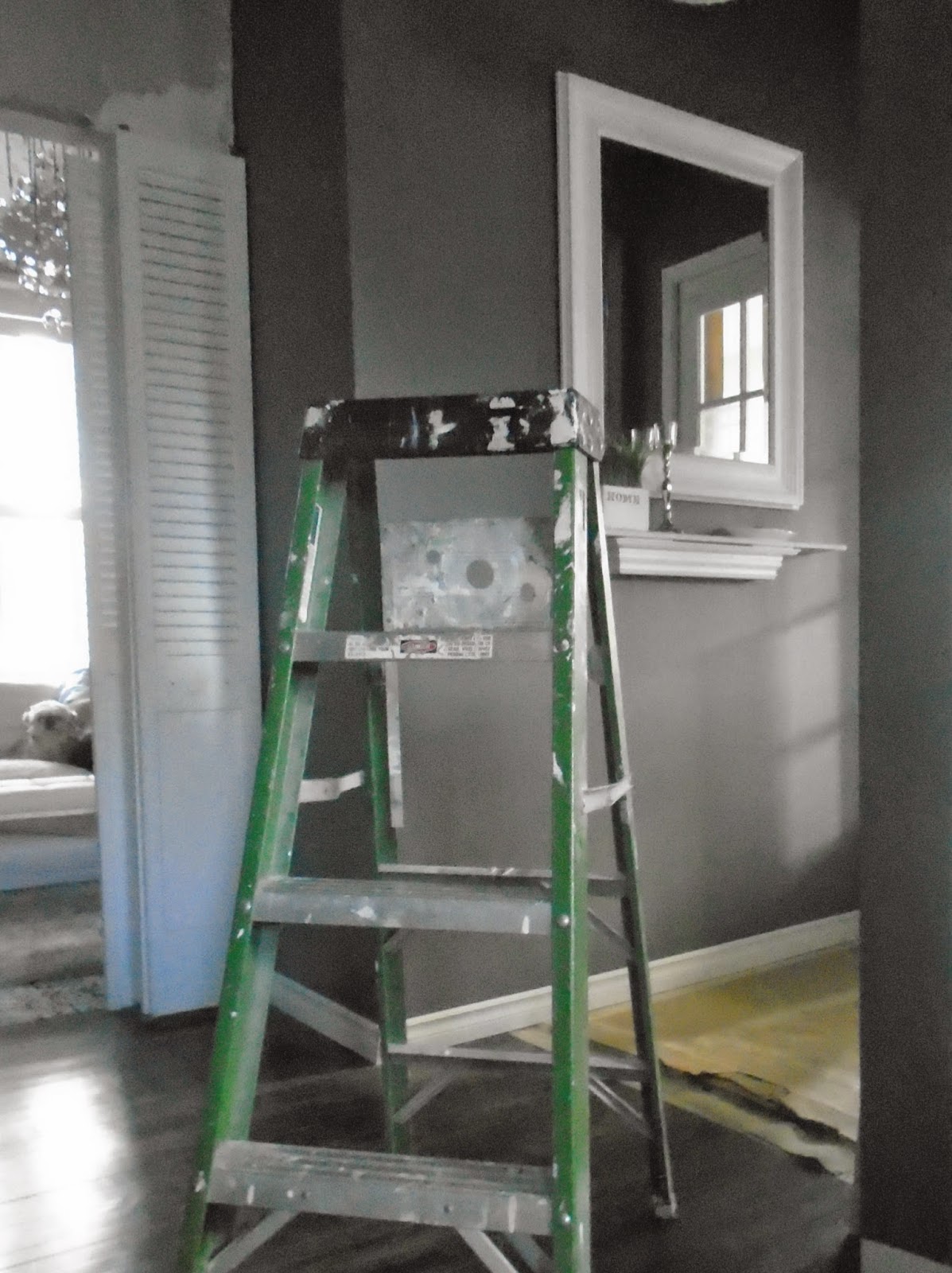 It's even adjustable for height ! 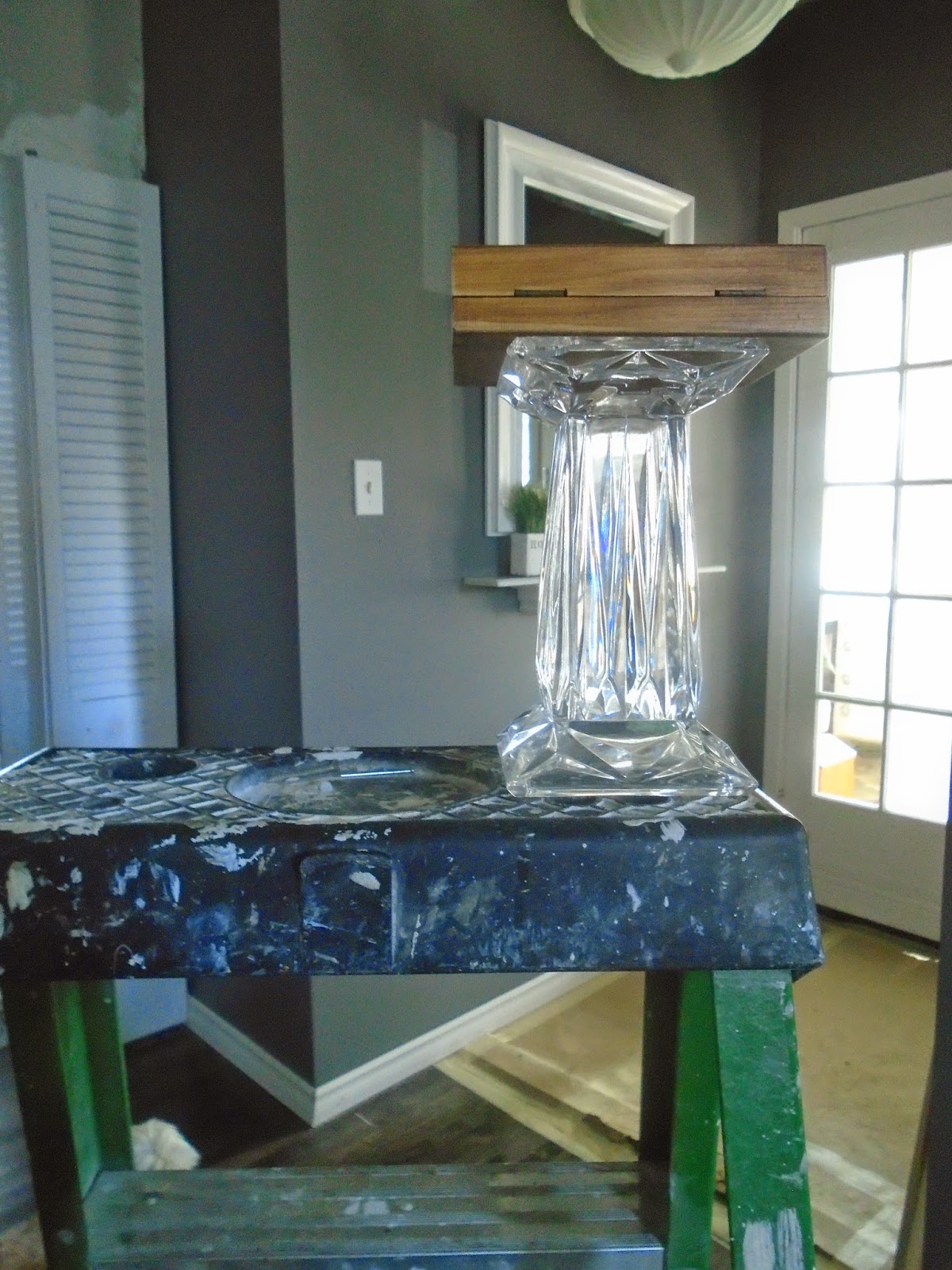 You see?  Renovating a house certainly has it's advantages !
I'm just trying to figure out how to make it less conspicuous when I want to take photos in public places.
Maybe cover it in ribbons ? 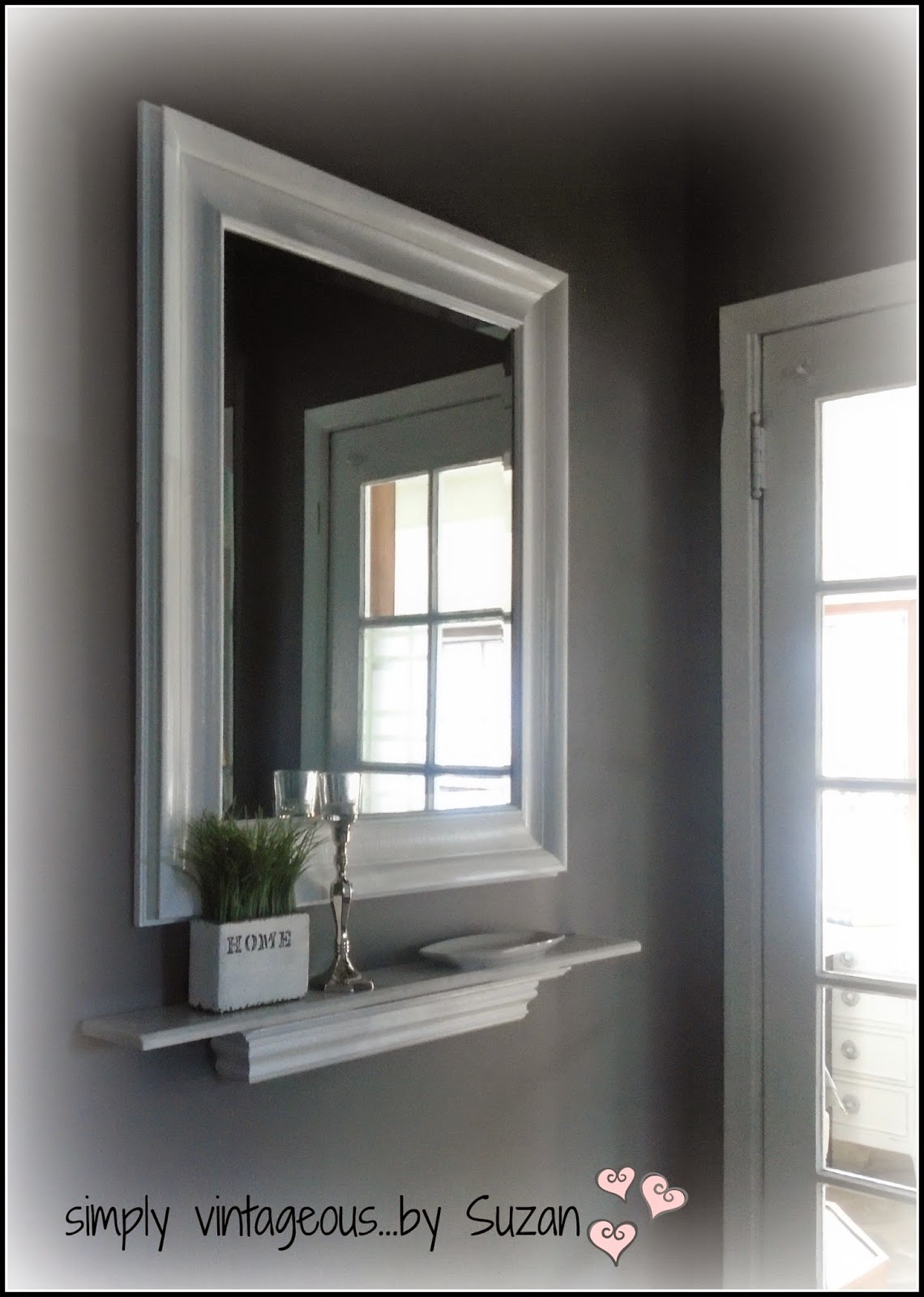 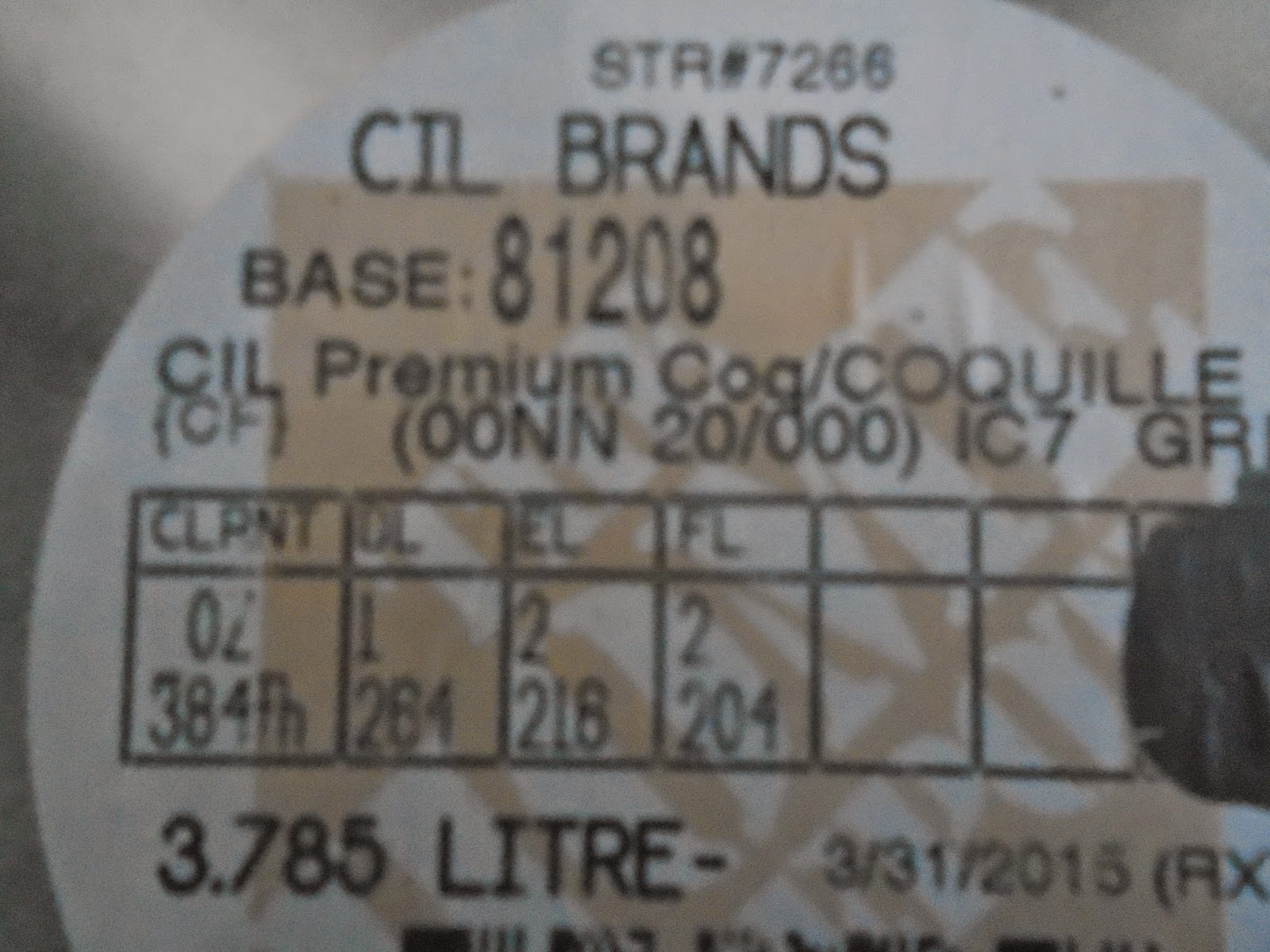 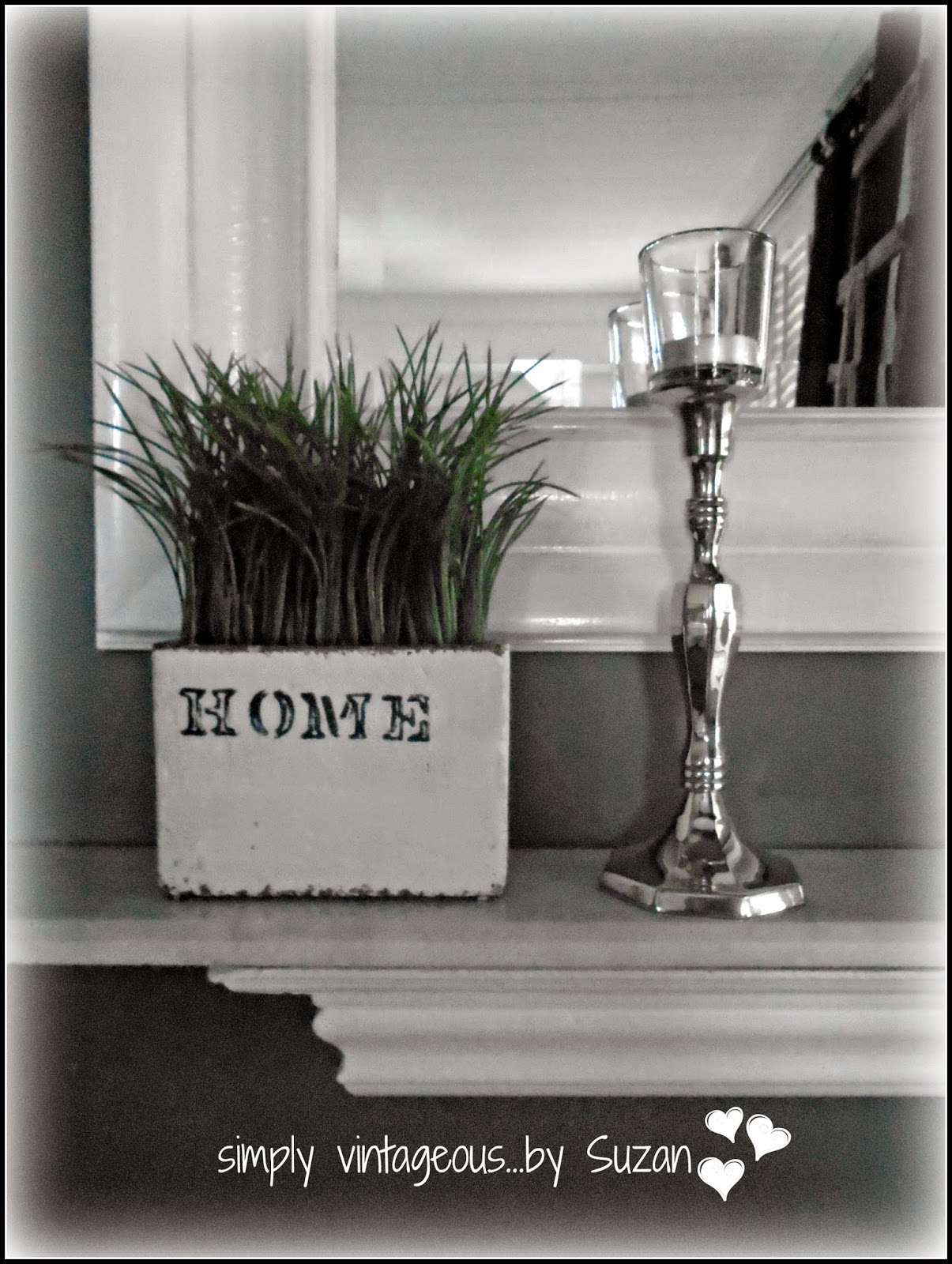 John says - Have you seen my keys by any chance?
Suzan says - They're on the shelf by the front door.

It felt so good to say that.