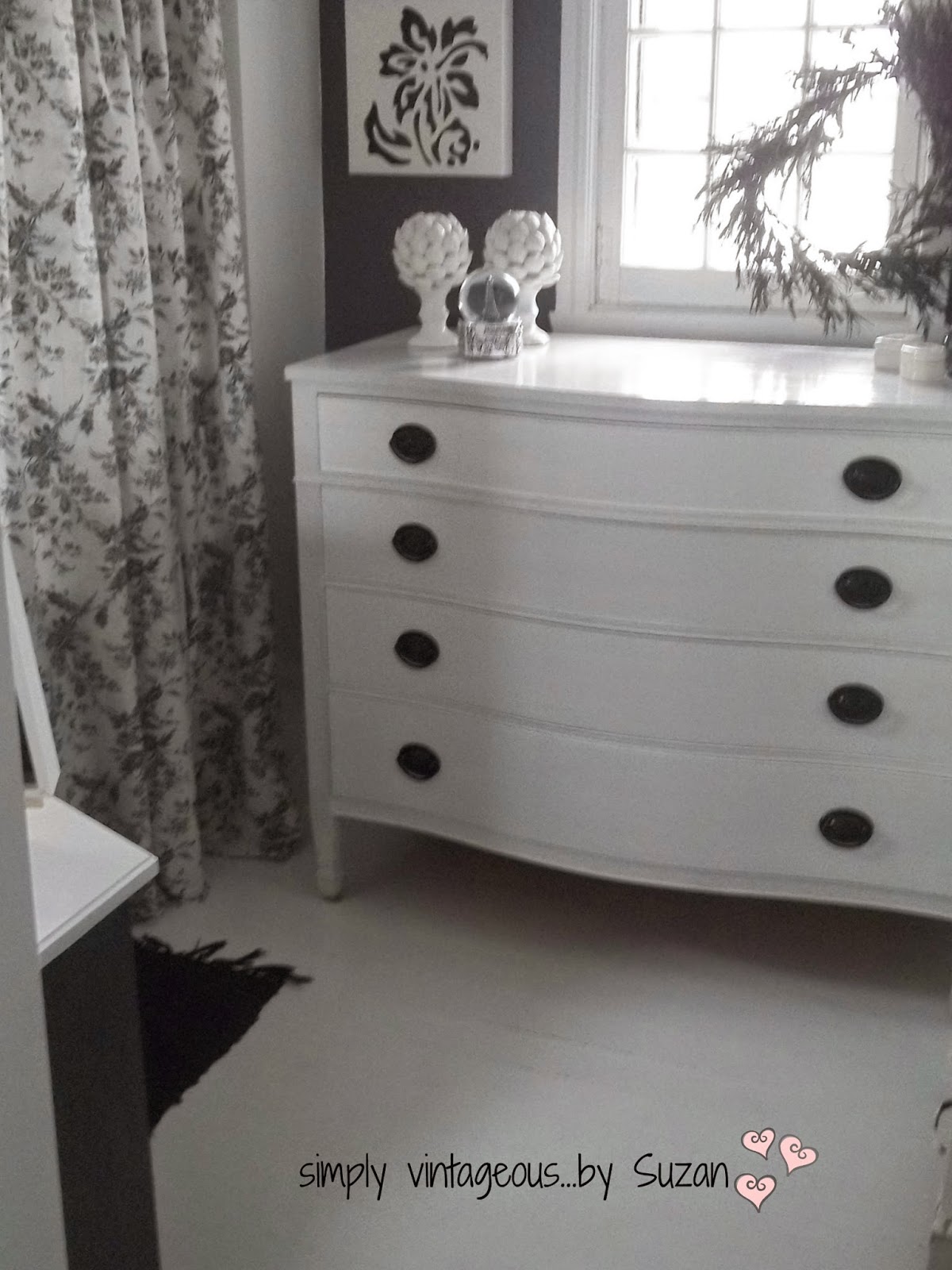 Most people have closets larger than that - I whined
A lot of people have bathrooms bigger than that - I muttered
But it was all I had to work with - so as soon as I was finished whining and muttering I went to work on
making this impossibly tiny space into a second guest room.
You can see the first one HERE ( which has at the very least 80 square feet - HUGE lol ) 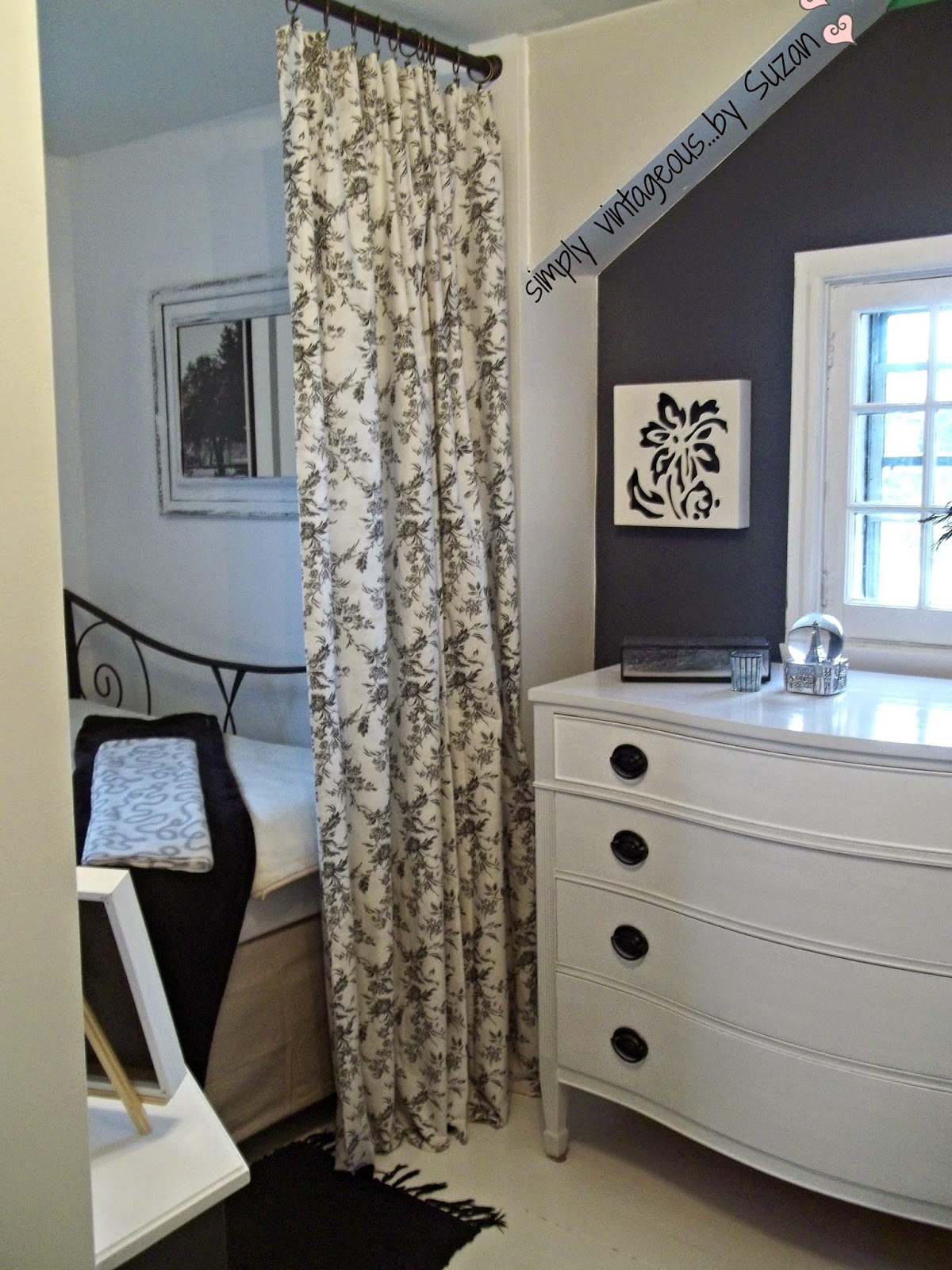 These 2 tiny rooms used to be one large one - the previous owners split them into 2 for their 2 daughters.
The jury is still out on whether I should have reverted back to one larger one - not sure if that has any resale impact or not...............I just have to hope a future owner will see charm in them and overlook their size.

A quick coat of black spray paint on the dresser handles to make it fit in the room's decor. 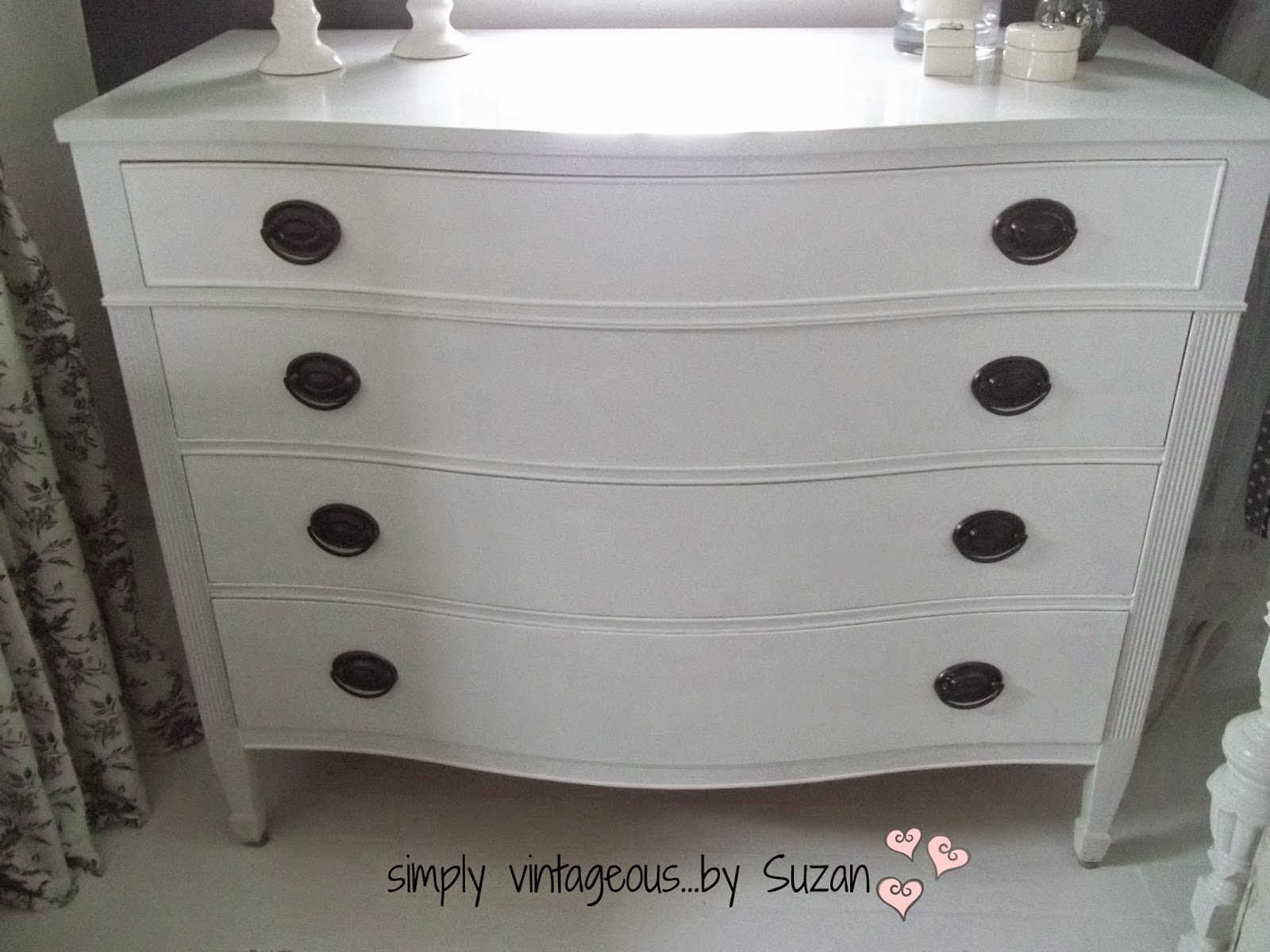 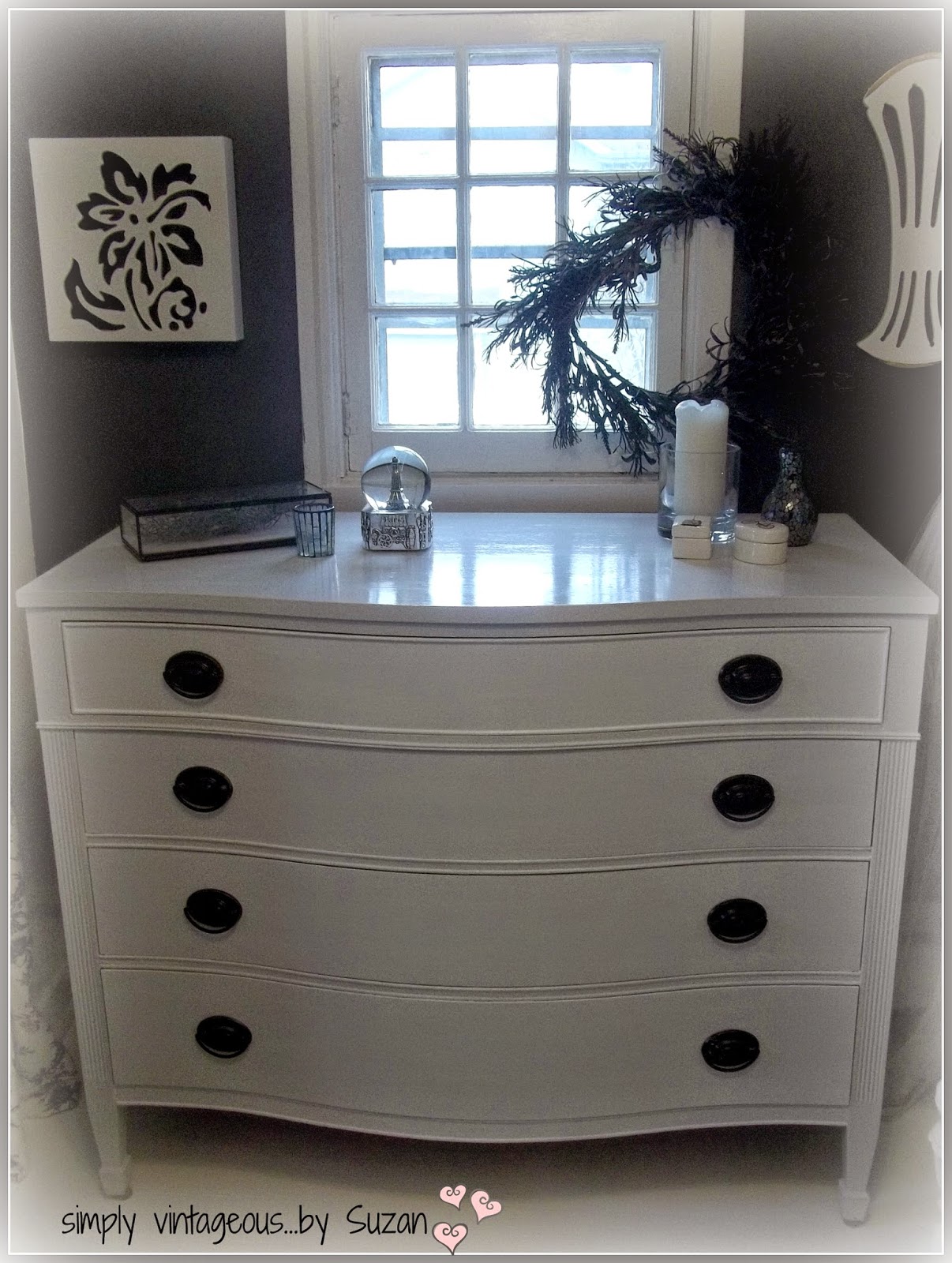 Anyway -the only way this was ever going to work was by creating a bed nook..  There was simply no other solution.
BUT - that little section of the wall that jutted out?
Well that allowed for a nook to fit a double bed perfectly - and I DO mean perfectly - 1/2 an inch larger and the whole plan would have to have been scrapped.
The bed frame was a craig's list find - and though it really wasn't my first choice - I'm so glad it was the one that ended up being available - 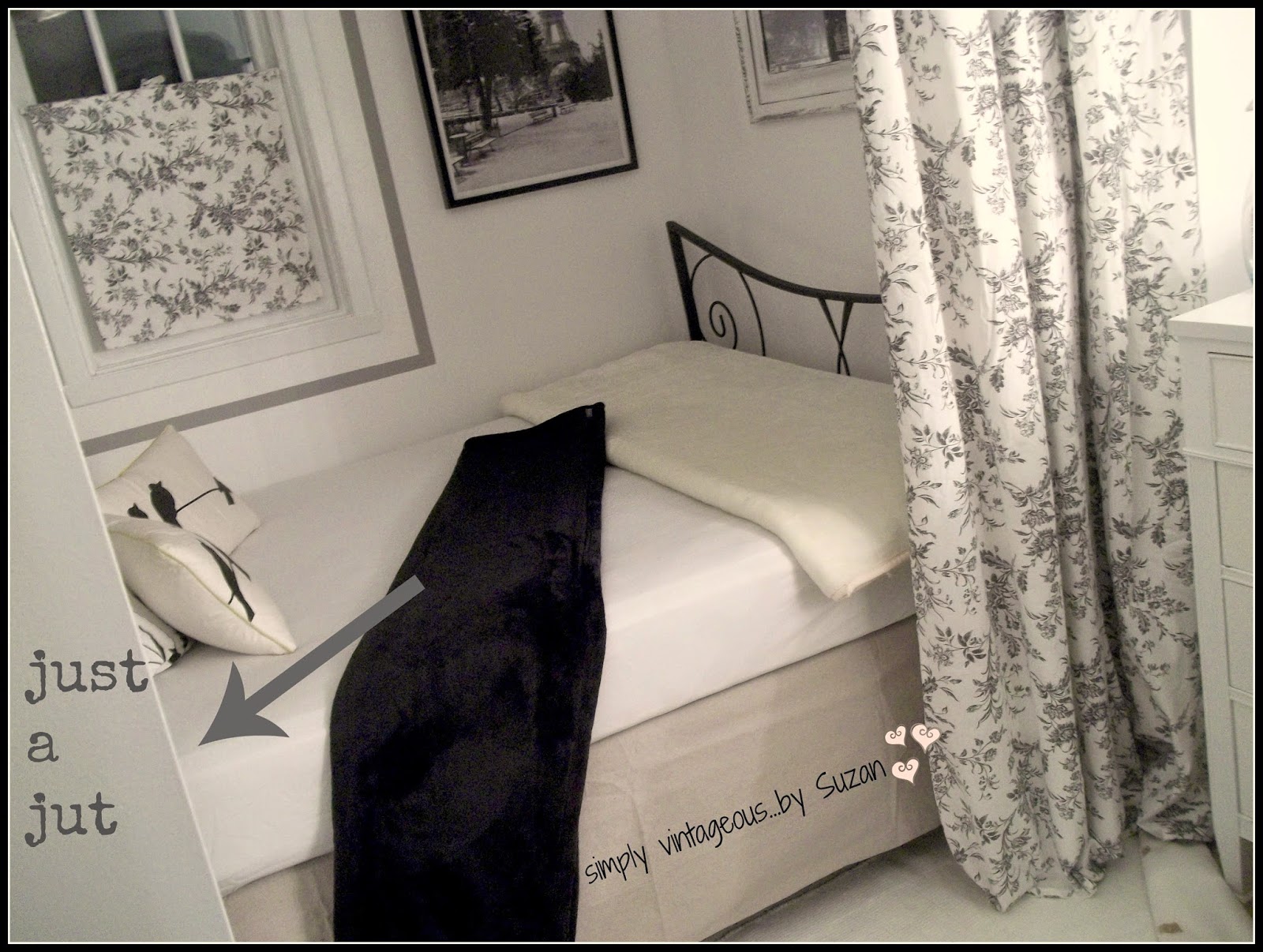 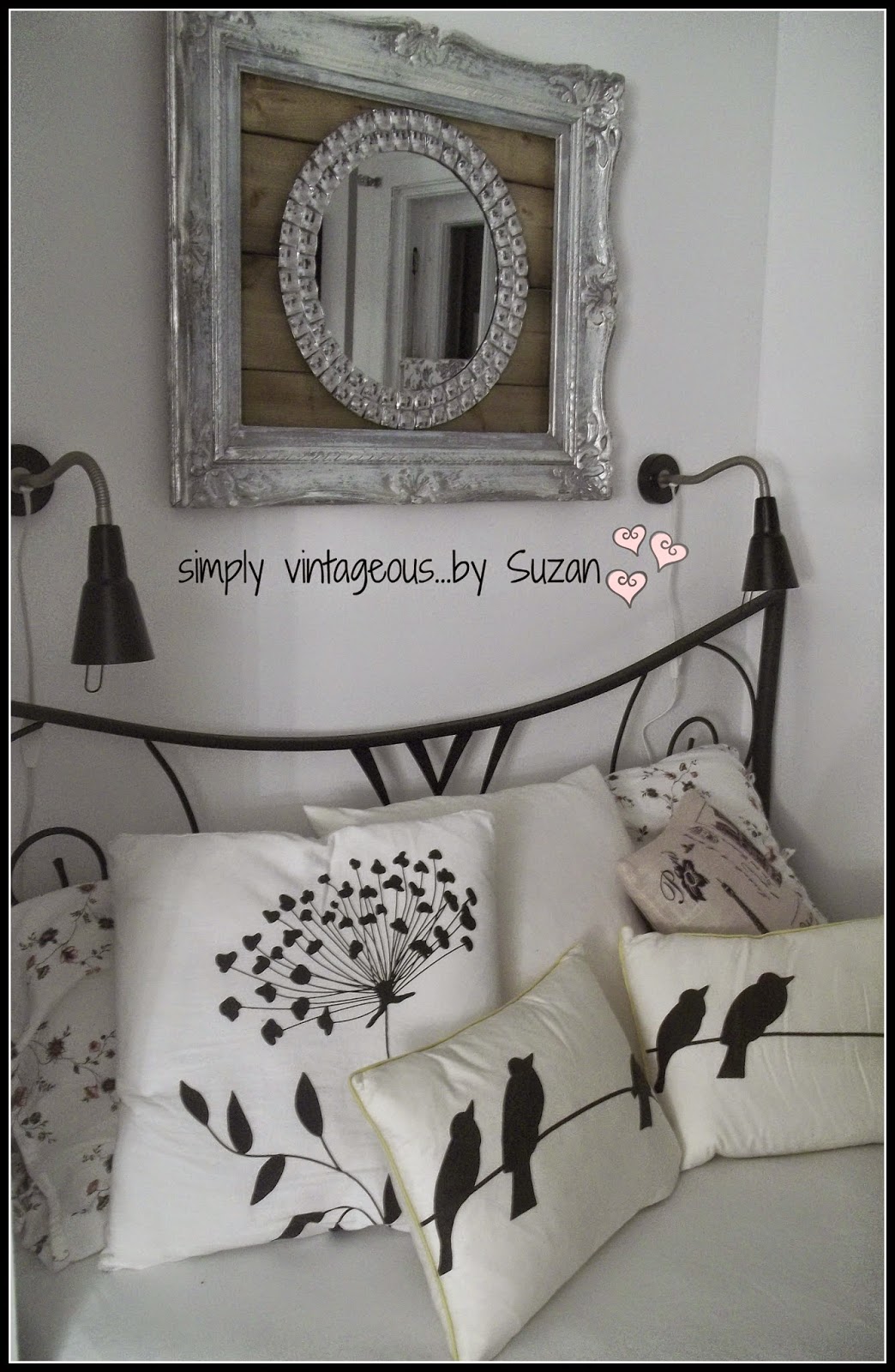 Since I have to look for positives wherever I can find them in this room - I WILL say that I love the fact that the " nook " has it's own window - when you're laying in the bed all you can see are the tree tops - it's quite pretty. 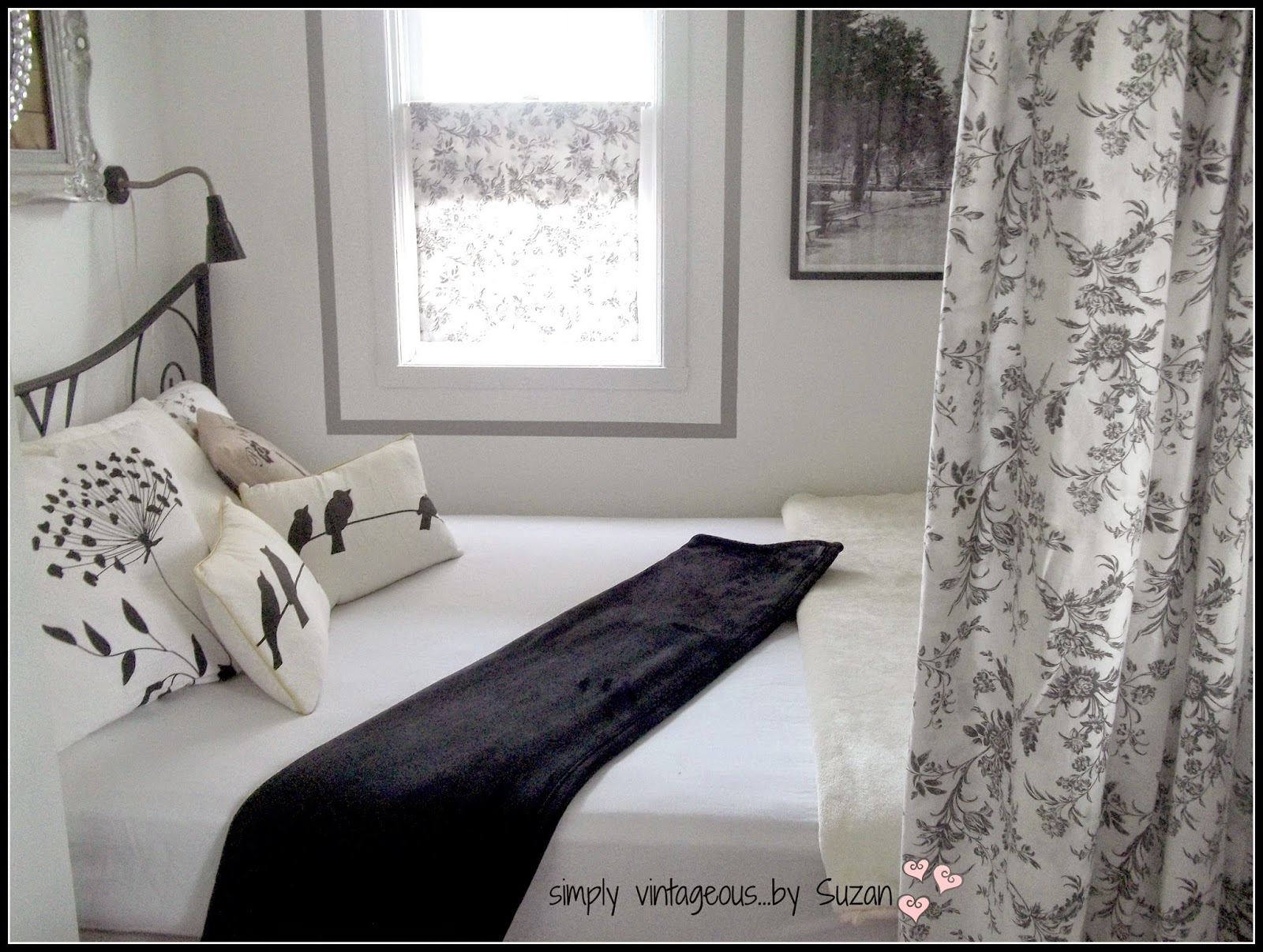 I took this little console table out of our bedroom and put it in here - it's narrow enough in depth not to take up desperately needed inches ( it's pretty sad when every inch - not foot - but inch - counts ) but it's a place to put a glass of water - jewellery - etc.
And again I totally lucked out - since the width of this is exactly the width of the wall which it rests against !

John says - WHERE ARE YOU GOING WITH THAT?
Suzan says - It's going in the guest room
John says - HERE WE GO - EVERY TIME YOU WORK ON ONE ROOM - EVERY OTHER ROOM GETS DISMANTLED.

But what he doesn't know is this:
I'm dismantling that right our of our bedroom - because in it's place I want him to build me a faux mantel !!!
( UPDATE - you can see the fireplace and mantel HERE and HERE )
Besides it fits the hobbit's guest room better I think. 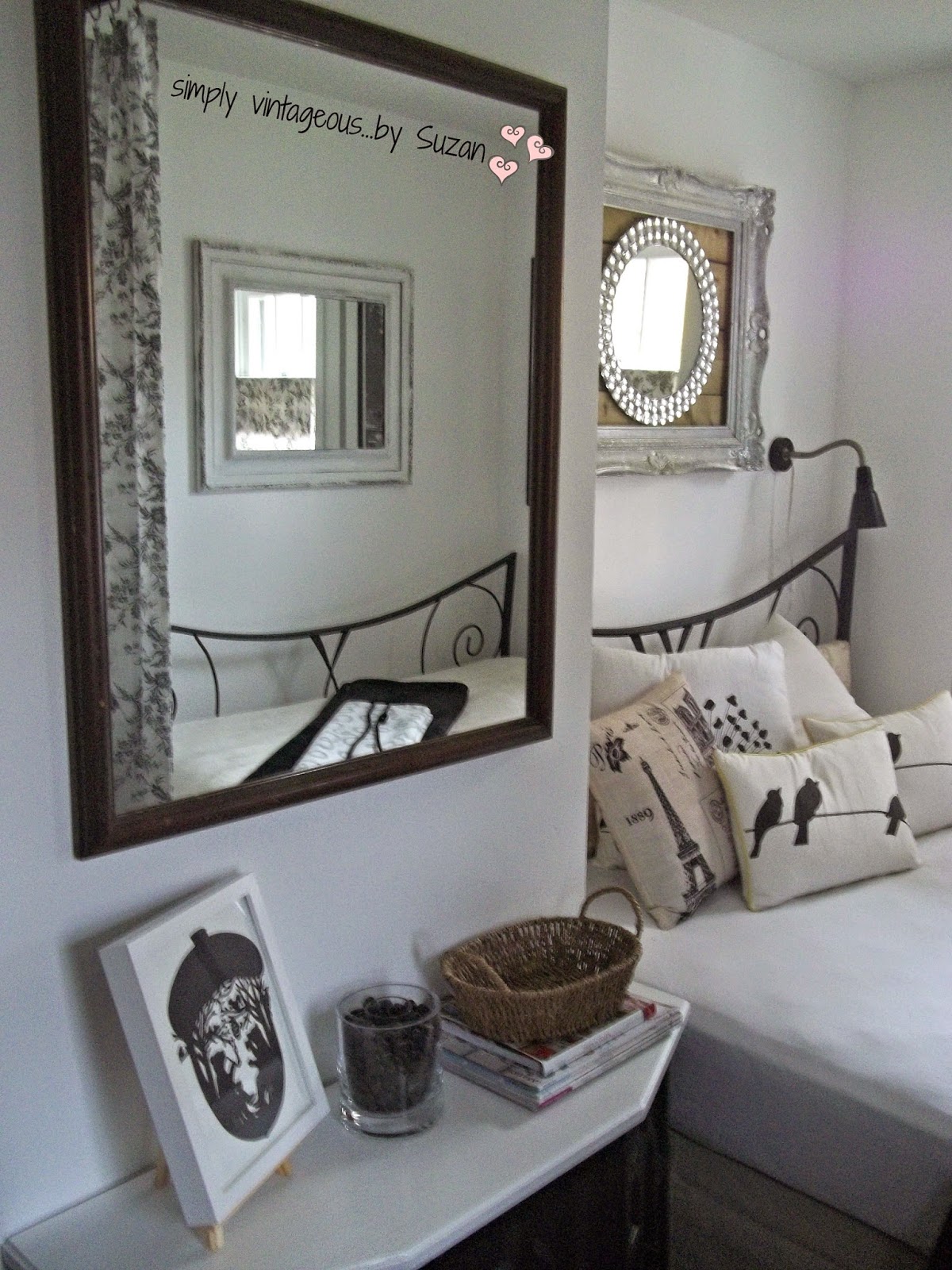 Drapes made from a duvet on the other end ( which can close off the bed completely ) finished that section off.
I also took the Parisien Armoire out of the other little guest room to bring in here LOL 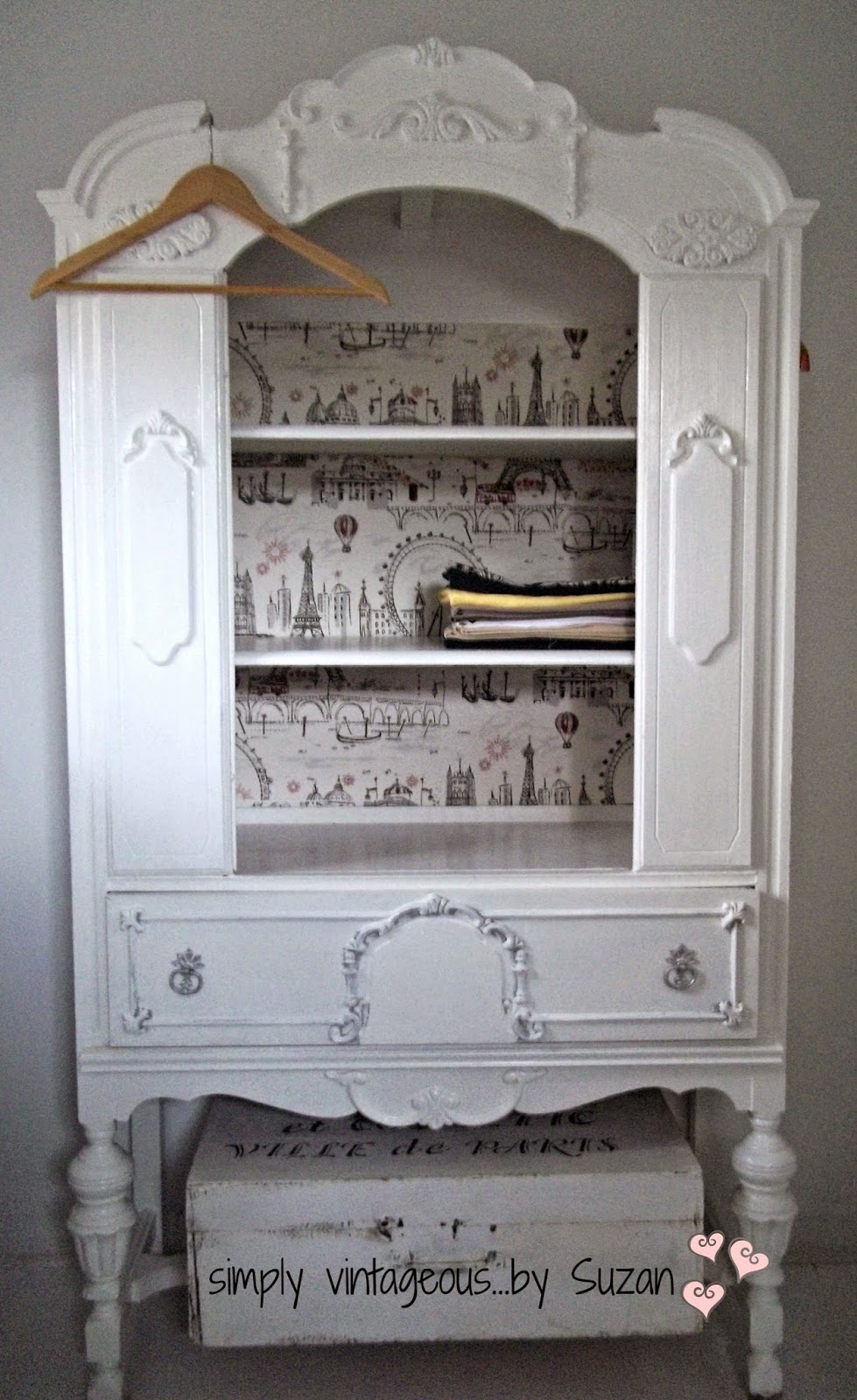 I didn't dare ask John to help me with this one - so as I was struggling to get it from one room to the next I banged it into the doorway accidentally and up he hops from where he was watching t.v.

John says - What the hell?
John says - It's an insane asylum here -
John says - Can't you leave anything alone at all?
Suzan says - NOW IS NOT THE TIME TO BUG ME JOHN -
Suzan says - Feel free to give me a hand if you'd like -
( as the armoire is precariously tilted to one side - ready to crush me like a bug )
John says - Would you like to bring the dining room table in here too - you might as well
I've learned to block him out - but it's really getting annoying now - he has a comment on every single thing I do - every single step of the way.

One of my daughters gave me this " dress " dummy a couple of Christmas' ago - I brought it out into the landing so I could work on her - and then I needed to drape some dark curtains so you could actually see her.
Again hawkeye appeared out of nowhere

John says - Dressing the dummy now?
John says - What's with the velvet drapes hanging off the dresser?
Suzan says - So you can see it in the photos
John says - It looks
Suzan says - OMG - LEAVE ME ALONE JOHN -
ISN'T THERE A HOCKEY GAME ON? 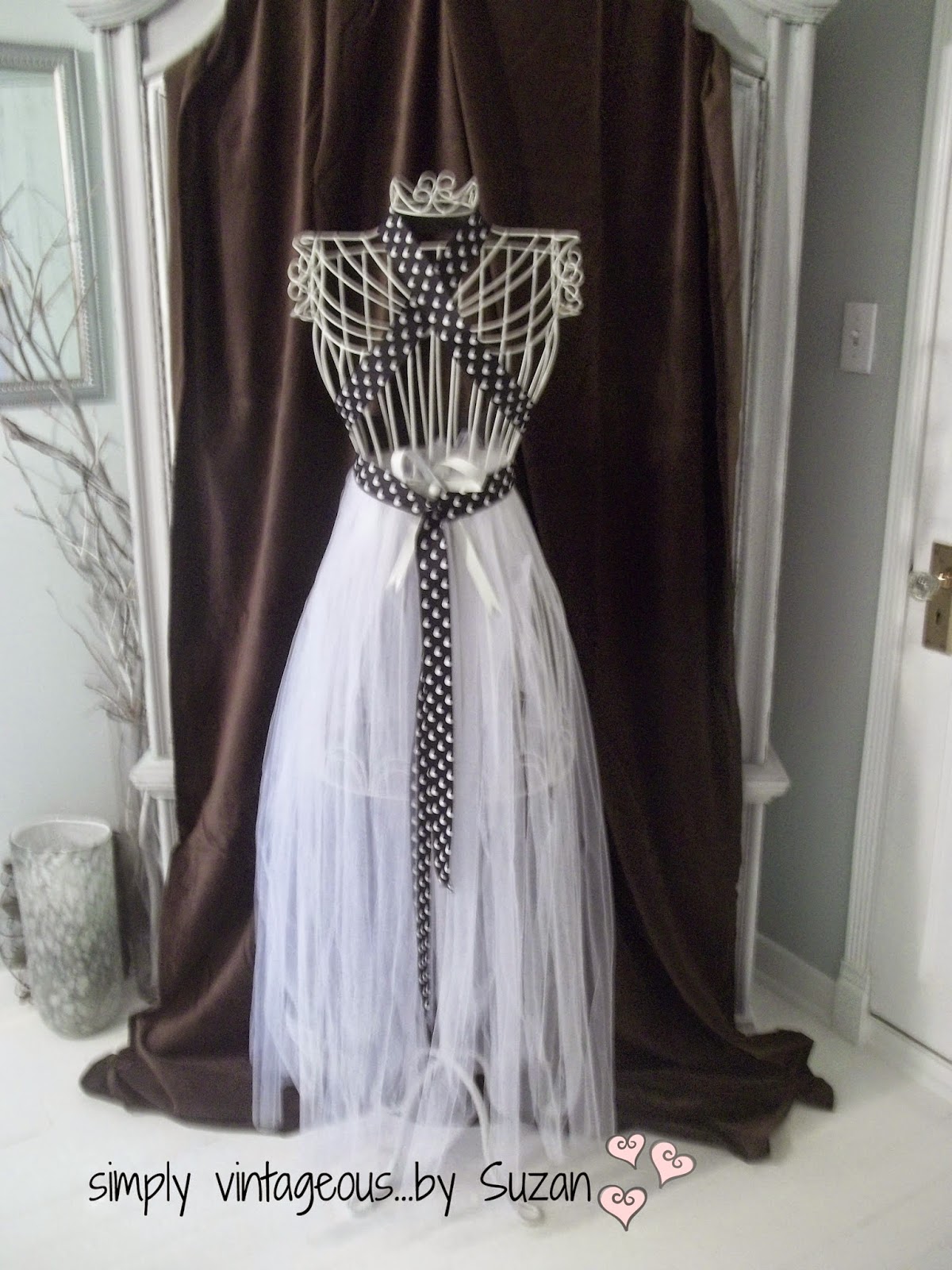 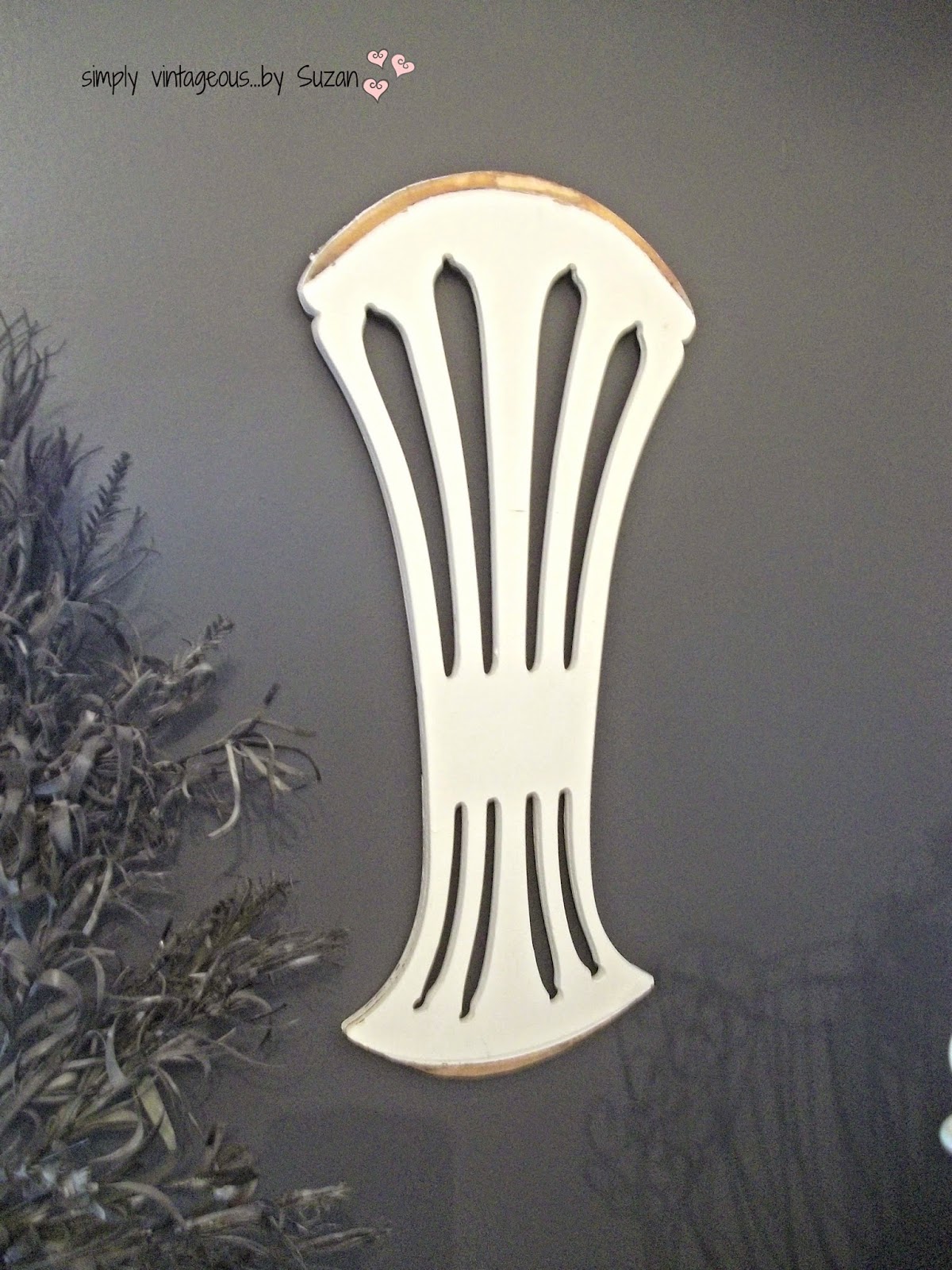 And now I'm going to show you the most perfect artwork for this little room.
Tina from WHAT WE KEEP sent me this -
There's sort of an inside joke here - she once told me a bear got in her back yard and she had to dive into her pool to escape it - AND I BELIEVED HER
I'm not blonde for no reason you know !!!
She had this silouette made for me and I framed it - I LOVE it ( thank you so much Amigo of mine )
I'll show you what another amigo sent me later this week -

Check this out - first of all it's black and white - perfect -
And secondly, it's 2 bears living inside an acorn " nook "  ( and the bear reference was totally lost on me - blonder and blonder - she actually had to explain it to me )
Too cute for words -
It sits on the end table - along with magazines to browse through 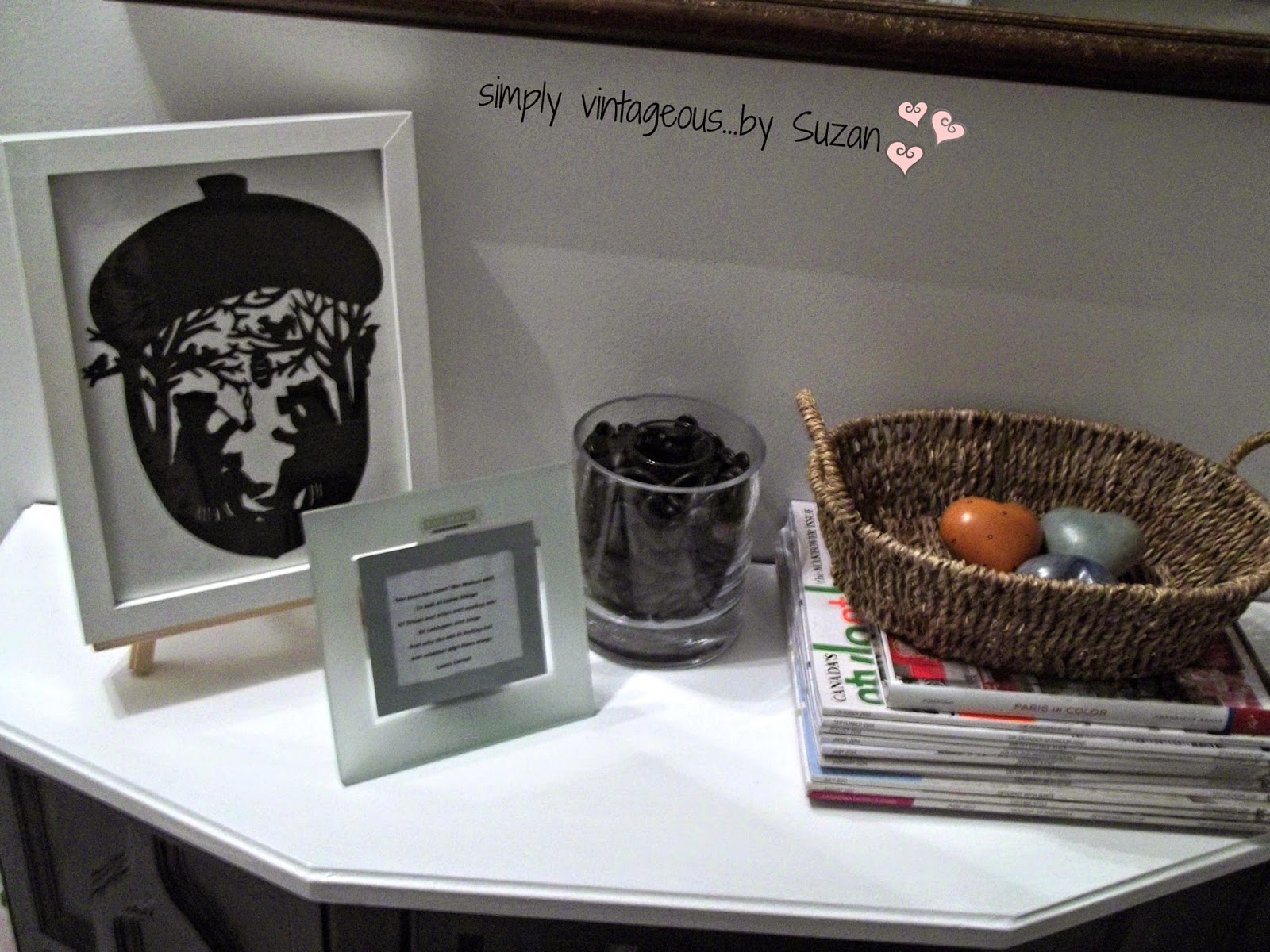 Once it was all finished John gave his approval
John says - I have to hand it to you Suzan - you somehow always manage to pull off the impossible
He doesn't see the irony in that.
He's impossible -

TOTAL COST FOR THIS MAKEOVER 100.00 DOLLARS

But you work with what you've got, right? 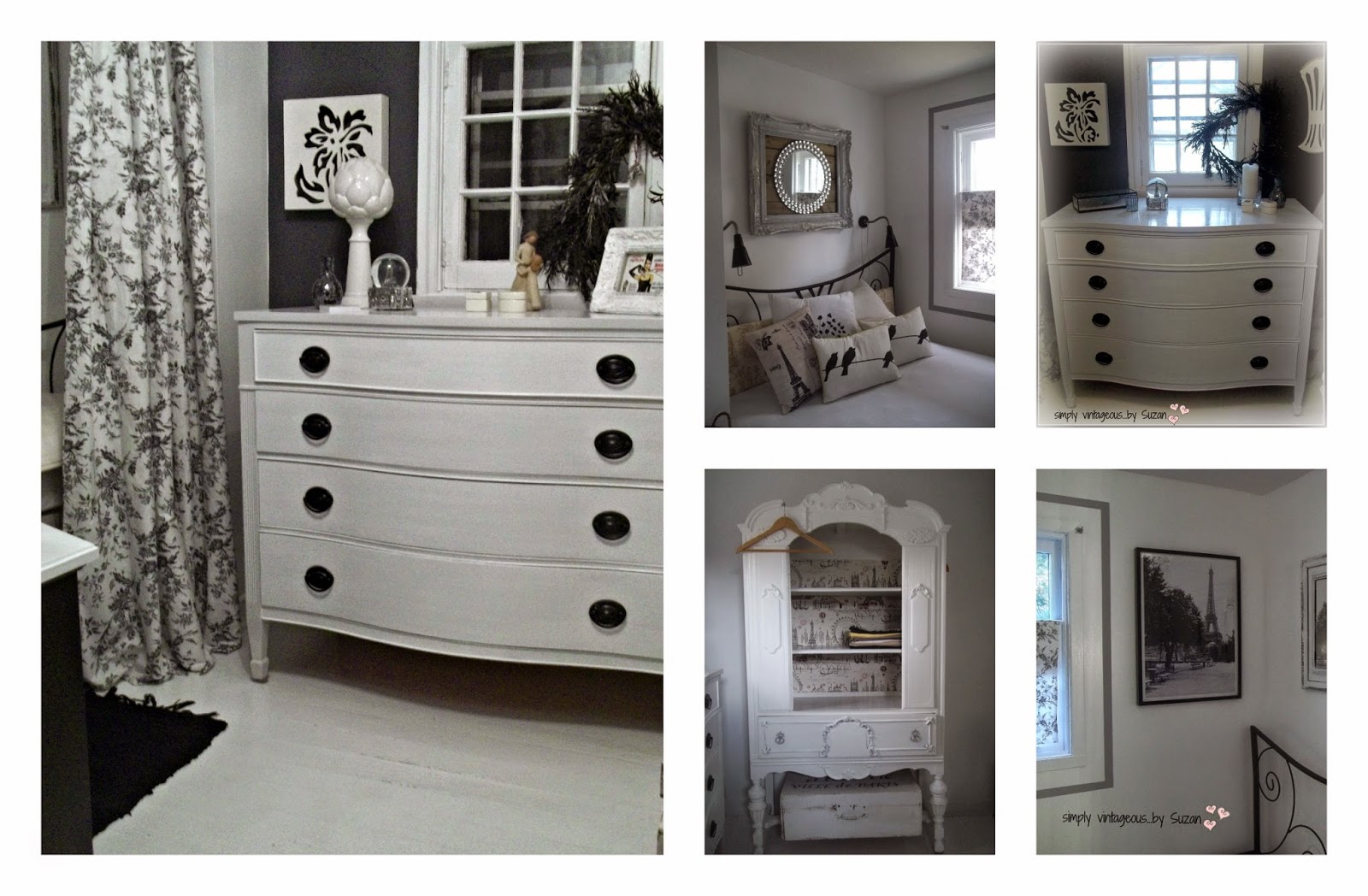 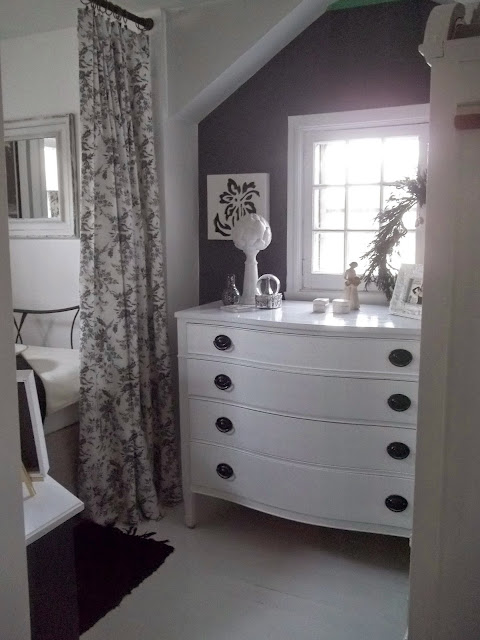 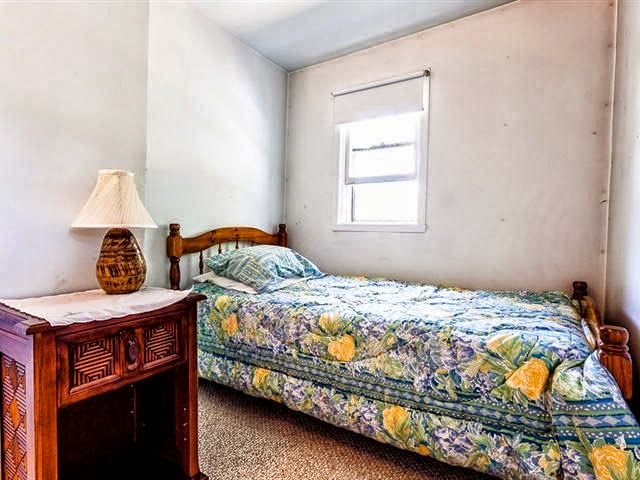 You all have a wonderful Tuesday !
Much love,
Me