2 Brothers.
One was frail - born with a hole in his tiny heart - that took many operations to correct.
He was coddled - over protected - and over compensated for.
His brother was more robust - far healthier - and like is so often the case - overlooked because his brother was a constant source of worry to their parents.

2 Brothers.
One quite spoiled because of circumstances.
One always trying to find the love the parents seemed to mostly show the other.
One constantly praised.
One always in " trouble " for something or other .

2 Brothers.
One very articulate - able to speak his mind in whatever fashion he chose - without any scolding.
The other developing a stutter trying to get his broken words out as quickly as he could - before the attention was inevitably transferred to his little brother.
Mostly being told to " spit it out for God's Sakes ! "

Until his first child was born - the first grandchild !
A girl !
The first girl born on his Father's side in too many years to count !
He finally did something right.
And the joy that this brought to the parents slowly erased the painful memories of
a boy who was denied the emotional connections he so desperately needed.
His stutter disappeared.
He walked a little taller - the future was bright and there was a whole lifetime ahead of them all.
To make peace - to forgive - to embrace - to erase..................

Except there wasn't.
The little boy with the hole in his heart is a strong healthy man today - 78 years later.
The healthier boy?
Well he was gone not long after his 29th birthday - because what they didn't know - couldn't know -
was that a brain aneurysm beats a hole in a tiny heart.

He left a widow of 24 years old to raise children as a single Mother.

His Father drove into a brick wall the day he lost him - an unsuccessful suicide attempt.
He fell to his knees in the hospital screaming " No God - Please No God - I can't bear it "
He had to be sedated but when he finally stood up people swore he was half the size forever more, the stoop in his back was so pronounced.
His Mother had to be restrained from throwing herself in the grave at his funeral - not being able to bear being separated from her first born.
All that love..................from the core of their being - ( and there is no doubt it was there ) being expressed just a little too late.

They showered his children with more love then they probably showed even the boy with 2 holes in his tiny heart.
They were coddled - over protected - and over compensated for -  of which they had much experience.
They were fiercely protective of them - they spoiled them and loved them unconditionally - perhaps in hopes that their Son could witness it from beyond.

They've long since joined their boy -
The little boy with the hole in his tiny heart went on to have a very successful career.
The widowed bride remarried.
And that first born grandchild?
She has a blog where she sometimes shares just a little too much............................

He was their Son -
I am his daughter -
At 55 I've been on this earth almost double the time he was granted
I wish I could hug him.
Just hug him.
He left a tiny hole in my heart too.

A tough lesson in the importance of loving unconditionally.
Always.

Have yourselves a wonderful day
I'll fill you in on how Mother Nature bit me after my last chat on how Spring like it was here in Montreal
AND how my new camera died.................( which is why you're left with only words for today's post )
Much love
( unconditional of course ! )
Me

Shaking my head I go into the kitchen - what can I put for crunch?
I start chopping up red pepper really quickly before he walks in .................too late

John says - Oh - no red pepper in mine
John says - YOU'RE PUTTING MAYO IN IT ?  NONE IN MINE PLEASE
Suzan says -Why didn't you just say you wanted plain turkey between 2 slices of bread?
John says - Well it doesn't have to be plain - I just don't want the stuff you mentioned in it
Suzan says - THERE'S NOTHING ELSE I CAN PUT IN IT!!!!!!!!!!!!!

If any one out there is a doubter of climate change - please book a trip to Canada this winter................YOU NEED to see this with your own eyes.
I can remember a time when once January arrived you started the count down - winter was almost half over at that point - although the most vicious part of it was still to come - it at least felt like you could see the light at the end of the tunnel.
Now?
It really hasn't started.
We had a glorious dump of snow a couple of weeks ago - and there's not a trace of it left -
Apparently 85% of Canada is still green - unbelievable - it truly is !
Montreal was so famous for their snow that they had the largest snow removal system on the continent of North America - often lending it out to our American neighbors.
It's unheard of to look out and see tidy lawns at this time of year.
I think I saw our ground hog come out the other day - he's confused the poor thing - he thought he'd slept in till Spring - missing Ground Hog day entirely.

Take a second to watch this - it's hilarious !  ( and scary at the same time because it's happening )
I think I've posted it before - but it makes me laugh 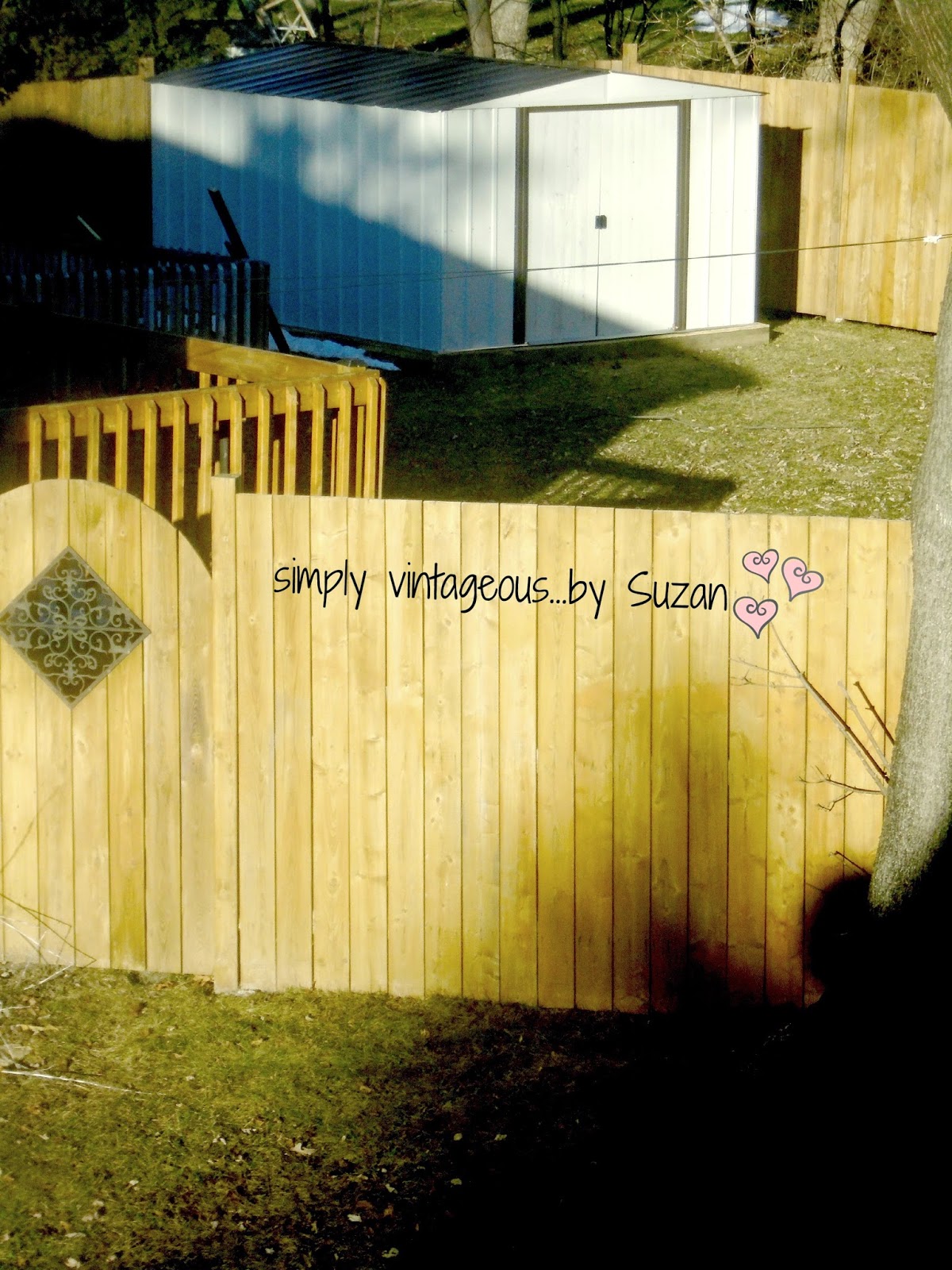 I'm thinking of starting a linky party this month - so get all of your projects ready !
ANYTHING goes -

There was nothing on the other night - so I resorted to watching a show on a morbidly obese man awaiting an operation.
It was very sad actually - not good television - but sad none the less.
John came in and watched it for 5 minutes.
John says - Do you think we could watch a House or a Murder instead?
John says - This is sickening to watch - garbage.
Suzan says - We've already seen both the House Hunters AND the murder story...............
John says - I'm going to play poker...............

A police chief in Georgia is on leave while they investigate.
He shot his wife by accident.

I have to go pack up Christmas now - and pick up some paint for that Dining room set tomorrow -
Have a wonderful weekend one and all !
Much love,
Me