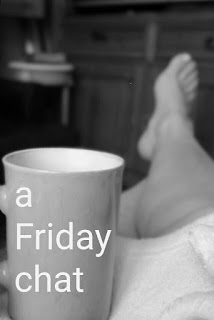 I've been working non stop the last month or so - on the house - the garden - furniture - but other than instagram I haven't been diligent with taking photos.

I did a beast of an armoire ( she's now a beauty ) that I should get around to posting and I've just finished a little chest.........maybe next week - for now I'm just going to sit around and chat with you and take a break !

Soooo..... you know my ongoing problem with chin hairs ?
I've mentioned it in passing on a few posts.
Well I was at the pharmacy a while back and found a mirror that magnifies by 15 percent !
No more problems !
I was actually excited to get home and get to work on those few stray hairs.

DON'T DO IT.
JUST LISTEN TO ME AND DO NOT BUY ONE OF THOSE MIRRORS.

I sat down on the couch - brought my knees up to my chest - placed the mirror on my knees and positioned my face - tweezers in hand.

And then I screamed.

Grizzly Adams was staring back at me.

John says - from the other side of the couch - What the hell's the matter now ?
Suzan says - I'm like a gorilla - my entire face is covered in hair.
John says - No it's not - don't be ridiculous
John says - I'd like to be able to get through just one show.......just one of them without you interrupting with your foolishness - your face is not covered in hair.

But it is - and I had no idea.
I've been blissfully living my life totally unaware of that fact - grumbling now and then about a hair or two that I missed when putting makeup on.

THE ENTIRE SURFACE IS COVERED IN HAIR !!!
I plucked out two or three and gave up.

And now I'm wondering - if anyone has really great eyes - can they see that?
Failing eye sight has it's advantages I must say.
That's why you can only hang around with people your own age - a young whipper snapper would probably spot that flaw immediately.
Dear God...........really just Dear God.

Jesus Mary and Joseph.
Growing up in a large extended ( and boisterous ) Irish family - that expression was heard often.
Usually shouted out.
So it was JESUS - MARY AND JOSEPH ! this and JESUS MARY AND JOSEPH ! that.
I never considered it blasphemy because our Priest would say it himself - with a thick brogue - as he sat at my Grandmother's kitchen table smoking cigarettes and having a glass of whisky.
But this is the way I always think of it
JESUS !  MARY !  ( and Joseph )
Like Joseph is an after thought.
I always picture Joseph kind of just walking 2 steps behind with his head bowed.
Skulking around there somewhere in the background.
Just a random thought I thought I'd throw in there.

Anyway one day in school ( elementary ) someone slammed the door and I jumped - yelling out
Jesus Mary ( and Joseph ) !
To which the " sister " - ( sister Mary something or other ) came swishing down to my desk with a ruler in her hand ( the nuns in our school used these as weapons - tools of the trade so to speak )  holding it up in the air in a threatening manner

To which the ruler came smashing down on my desk so hard that it snapped in half -
I don't know how much the Catholic School Board spent in rulers -  but they were constantly being smashed in half by furious nuns.
They had anger issues - I swear to you.

The other night John looked at me funny.
Suzan says - Why are you looking at me like that?
John says - You have dark shadows under your eyes
Suzan screama - AGGGHHHH - WHY DID YOU HAVE TO MENTION THAT ?
John says - What ?  You're tired that's all
Suzan says - Now I''m going to go to bed thinking of Quentin and Barnabus
John says -  You're getting worse you know - with this constant jibberish
Suzan says - The show !  Dark Shadows - don't you remember it ?
John says - I think you make half this shit up 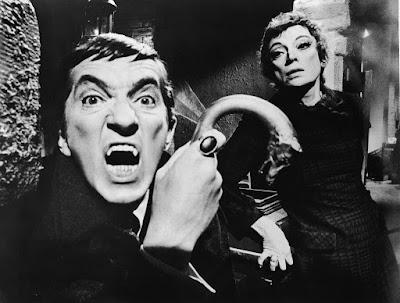 Now I'm in a nostalgic frame of mind.
So before I bore you to death with my ramblings of way back when I think it's time to sign off.
Hope you all have a wonderful weekend my friends !

Hugs - and love
Me
Grizzly
aka