A couple of weeks ago I mentioned that creep who had raised the price of a pill from 13.50 to 750.00 dollars overnight
and this week I found this song on you tube

I giggled my head off - I just adore Willie ( and Merle too really ) take a listen - it's too cute !

What is the origin of " mooning " someone?
It's a disgusting thing - really really disgusting.
Upon doing a little research I discovered it's been around since the medieval ages !
Isn't that something?
It's the poor man's version of walking around Stone Henge !

Anyway...............while I was researching " mooning "  ( dear God please let my browser history be cleared on the day I die - I have horrible nightmares of my children seeing all of this on my search engine ) there was an ad for Zulily with a top that I just fell in love with ...........so I clicked on the ad and it did NOT lead me to the top at all - I went through every single piece of clothing for women on their site and that particular top was nowhere to be seen.
False advertising?
I was so mad that had a Zulily rep been standing right in front of me I would have mooned them !
Instead I mooned John.
While he was watching Hockey

John says - What the hell are you doing?
Suzan says - I'm so frustrated I just HAD to moon someone..................
John says - If people knew what you did
Suzan says - Do you think I'm the only one who has ever done this ?  It's been around since the medieval ages !!!
John says - I WOULD LIKE TO THINK WE'VE SOMEWHAT EVOLVED SINCE THEN
John says - Can you get your A$$ out of the way please?  I'm trying to watch hockey.

The Montreal Canadiens lost their game - John crawled into bed quite depressed - but not before he mooned the t.v.

And of course that will bring us to song number 2 for this post - apparently mooning was a pastime Old Napoli too !

Have any of you seen this ad?

I've started decorating for Christmas...................slow motion type of decorating but decorating none the less.
I bought 4 wreaths for the front windows
Today John was going out and I asked if he could pick up 4 more.

John says - You're kidding me
Suzan says - No - I want to put them on the side windows too
John says - WE DON'T NEED A WREATH ON EVERY WINDOW FOR GOD'S SAKES
Suzan says - Just one side - so when we pull up we see them before we turn the corner
John says - You have to start sleeping at night - really - the ideas you come up just keep getting more and more ridiculous.
Suzan says - Some people even hang them on upstairs windows !

But now I've decided I need yet another 4.

I have a dilemma.
I wear eyeliner on the top of my eyelids.
Have been wearing it for 40 years.
BUT it's hard to apply when you're starting to resemble a Shar Pei dog.
Trying to manipulate the folds is very difficult - especially when you're as blind as a bat.

How's that for making you feel like a beauty queen?

Now you have to understand that John feels that's a compliment.
If I mentioned next week that he never compliments me - he'd say " I told you last week you look great "

We had quite the dividing issue here in Canada recently -
Over Muslims right to wear a burqua while being sworn in as Canadians.
They won.

The world is changing - even our corner of it.

In Massachusetts a woman recently fought for the right to wear a colander on her head for her driver's licence pic.
She won.

I'm not into " burquas "  I do - however -  love a pretty colander.
But you wouldn't catch me dead wearing such a boring one.

I had a yellow one and added a little bling to it - I chose a smallish one so that it would be more like a
" cloche "  hat - you know - sort of like the type Jackie O would wear if she were a Pastafarian.
It shall be forever known as my Easter Colander.................
Isn't it divine? 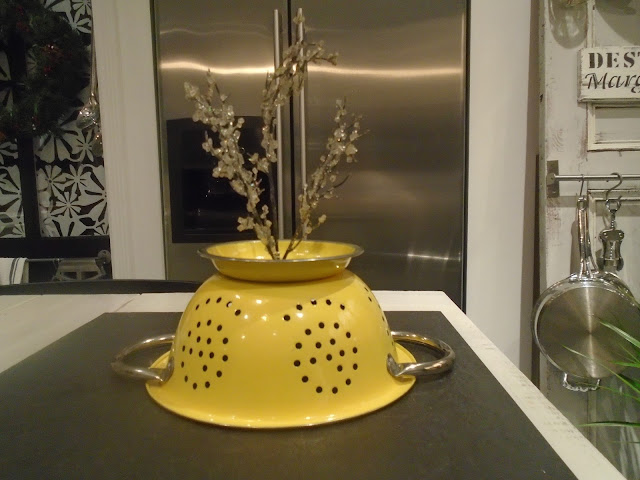 I excitedly put it on and promptly went to sit beside John while he was watching his hockey game.

John jumps back - WHAT THE HELL?
Suzan says - What?
John says - You outcrazy yourself constantly - you must stay up all night thinking of these whacko things
Suzan says - crushed - I thought you'd like it !
Suzan says - I'm joining the Church of the Flying Spaghetti Monster
John says - HOW DO YOU MAKE THESE THINGS UP ???
Suzan says - I didn't !  It's a real religion !
Suzan says - You have to stay on top of the news John - these are important issues and you sound like an ignoramus when you don't know anything about current things !!!

I think I'll pick up a pink one too - I could probably wear this to a Royal wedding - wouldn't it make an adorable fascinator? 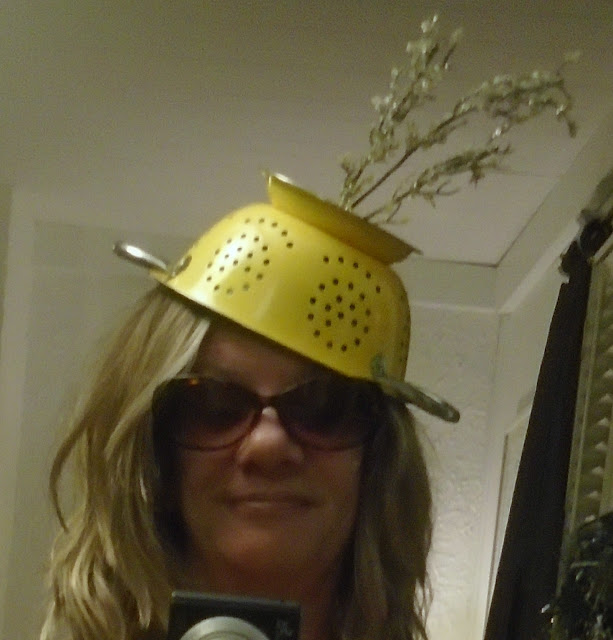 Have a wonderful weekend everyone.
Much love
Hugs - always hugs
Me