Decorating with Food - and a special " DOG " story


I usually decorate with foods around this time of year - ( isn't nature accommodating like that? ) there's just so many beautiful colors - and even just a bowl of apples can be beautiful - or a glass jar filled with tiny crab apples.................
OH NO - I think I accidently deleted the photo LOL - seriously - I may just be losing my mind ( slightly - I still have some of it left - but there seems to be pieces of it missing )
I just went to upload the photo and it's nowhere to be found - and the apples are now in the garbage which John took out this morning - or I would have removed them from the garbage for this post LOL

I HAVE THEM !!!
These are from the market - I asked if I could have the little bushels and the women said NO..........
That she needed them to show various sizes for sale.
NO?
She said NO?
Well that didn't go over too well at all -

The vendor wraps up the bushels in a bag and hands it to me
Suzan says - Well now I need the cranberries too please
The vendor looks confused -
Suzan says - JE BESOIN LES CANNEBERGES AUSSI !!!

John says - It's becoming very embarrassing being out with you lately
John says - You're at a market that sells produce - not what the produce comes in
John says - What's happening to you?  ( as he walks away from me ) 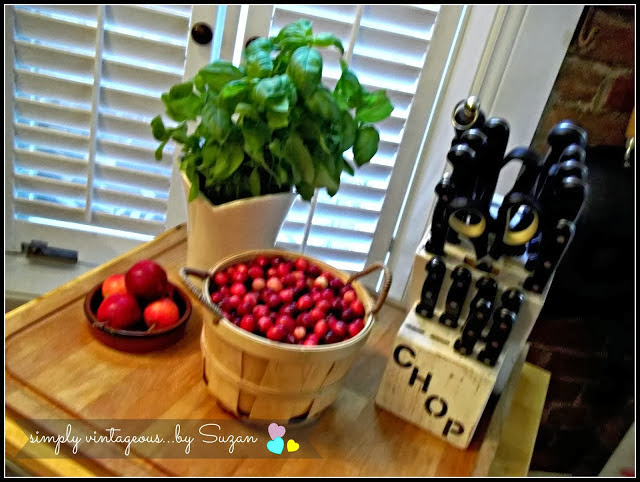 These " flowers " resemble little cabbages - cabbage is " CHOU " in French - not to be confused with
Chou-Fleur ( shoo fleur, don't bother me ) because Chou-Fleur is Cauliflower ................except in this case
because this definitely looks like a Fleur de Chou LOL
Did any of that make sense to even one of you I wonder??? 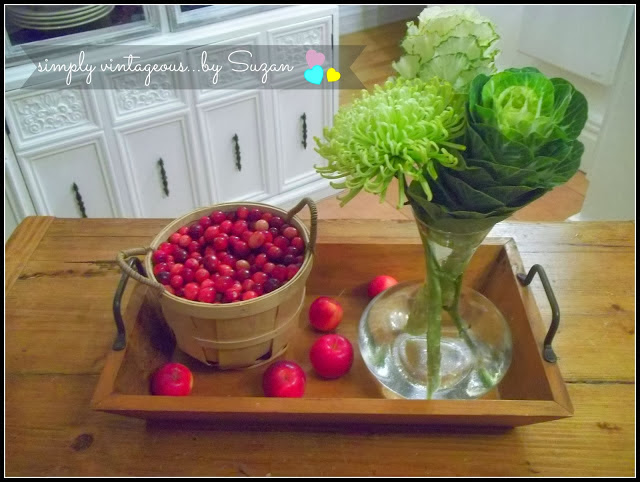 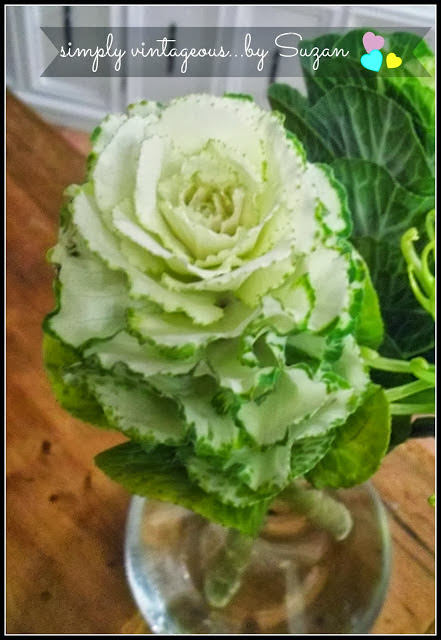 I even found Garlic Flowers !!! 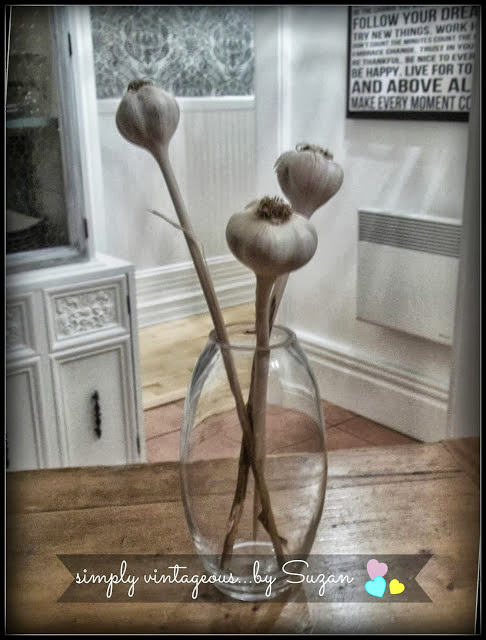 Last week, when I was throwing out flowers that had died - I discovered these had dried beautifully
( which I'd bought a bushel of these too ) 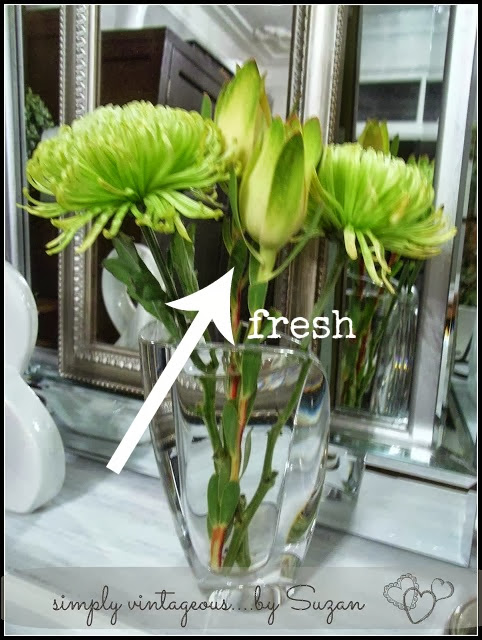 Does anyone know what they are?
They dried so perfectly - without doing a thing !!! 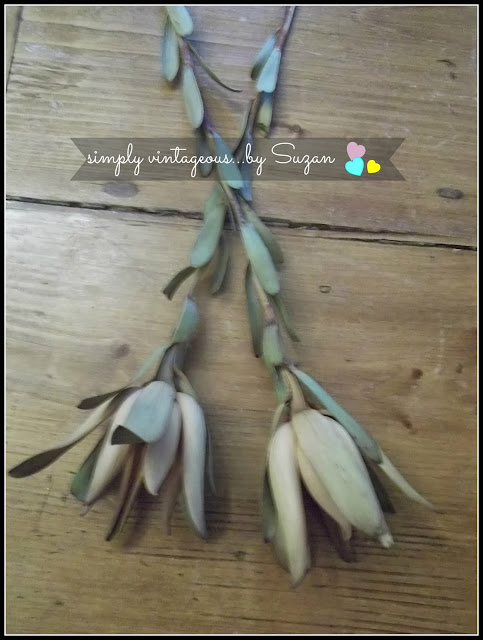 so they've become part of the fall kitchen decor now 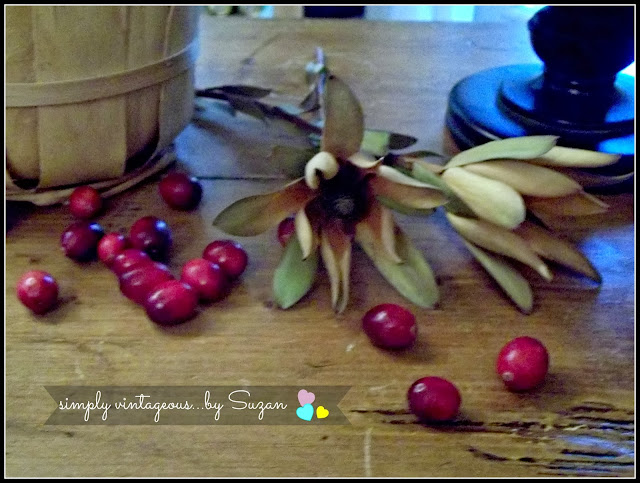 should this next photo be a painting? 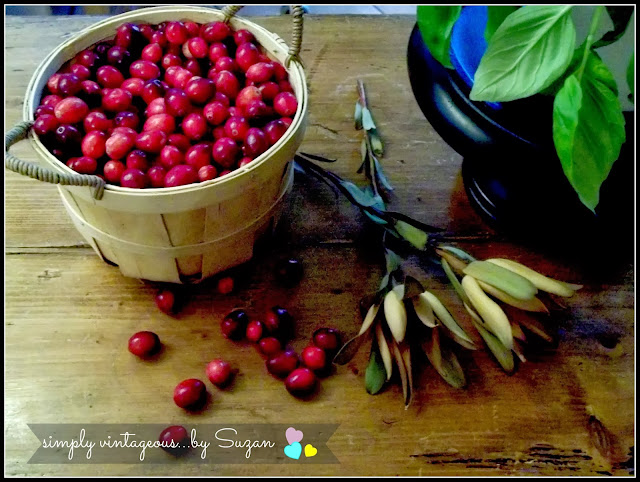 I tipped it over ( ever so gently ) and cranberries went flying and bouncing all over the kitchen - to which Soda promptly stuck one in her mouth and went running down the hallway - with me chasing her in full pursuit -
Give that to Mommy Soda - c'mon give that to me - with her growling and snapping at me - she was not going to give this little red treausure up.
So I ran to the computer and frantically googled Cranberries/Dogs just as John opens the back door 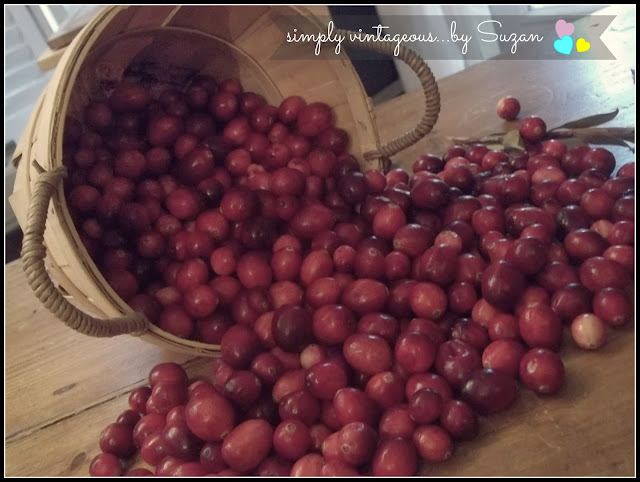 Anyway - that's how I decorate with food LMHO 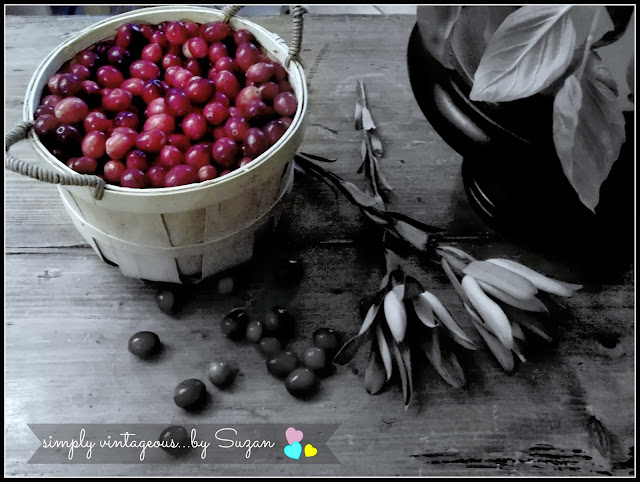 NOW FOR A VERY IMPORTANT LINK!!!!!!!!!!!!!!!!!!!
Tina - from WHAT WE KEEP is doing a post on behalf of Will and Grace - 2 beautiful dogs that were horribly mistreated - and will be having a flash sale on Friday to raise funds for their care.
It's a subject that's very near and dear to my heart - Soda was/is a rescued little dog - when she was found she was covered in scars from beatings - she weighs all of 12 pounds - she had been put in a little box and left outside a building for 3 days covered in her own filth............she found heaven here with us - but so many don't.
I'm taking advantage adding this to my post - because I know how much most of you worship animals - forgive me, but when I hear stories like this I'm moved more than I can say - please please please visit her.

For those of you that don't know Tina - she's the one that sent me this dish towel ( you can read about it Here )
Tina does the most beautiful embroidery work - and is the sweetheart to end all sweethearts!!! 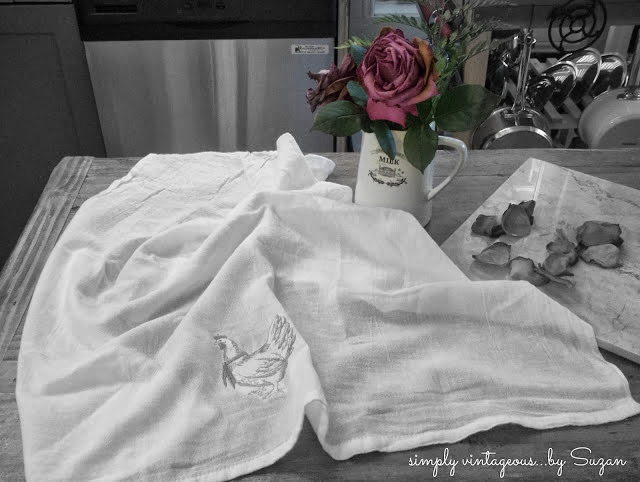 
Have a great day all!
Much love and gratitude to all of you - for being so loyal and visiting even when I don't have the time to visit back - I plan on doing as much " catch up " with all of you on the weekend and at some point in the ( not so far future ) there are a few giveaways lined up to show my thanks:)
Even John's been on board the last week or so - when we get back at night exhausted - he always says -
So - what do the bloggers have to say today - your comments are the perfect ending to very stressful days.
You're all -  (Tina Turner says it best)
Simply the best
( better then all the rest )