We were watching an old episode of Match Game last week.
For those of you that don't remember that show - it involved a hilarious star studded panel - 6 of them -
and 2 contestants.
The gist of it was a question was read out with a BLANK stragically placed in the middle or end of it.
The contestants chose what the blank would be - and hoped that the panel would come up with the same responses - points were gained for each " Match ".
Simple.
Oh and it tended to get a little risque ( this is an old show so quite risque actually for it's day )

Question:  ( or as close as I can remember it )

And we watched as the contestant responded with Toilet Bowl.
And we watched while she got a perfect match as all 6 on the panel said the same word.
A clean sweep.

You wouldn't want to see him watching Wheel of Fortune - it's actually painful to see.
Sometimes I shed a tear for him. 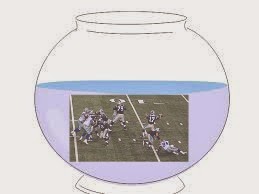 I was sick last week -

John says - NOW will you start putting bloody socks on in the winter?
Suzan says - Socks have nothing to do with catching a cold.   Colds are viruses.
John says - PEOPLE DO NOT GO BAREFOOT IN THE WINTER
Suzan says - Look - I'm not dancing in the snow for crying out loud - I'm walking around my house.
John says - IT DOESN'T MATTER - PEOPLE ARE SUPPOSED TO WEAR SOCKS IN THE WINTER.
Suzan says - Well I'll put flip flops on if it drives you that insane - but that's not why I got a cold.
John says - Why do you always have to be such a rebel?

John says - Do I put the dial on toast?
Suzan says - Yes John - while most people have roasted chicken - I think we'll change things up a bit and have toasted chicked - ( that's the rebel in me I guess )

2)  I explained to him that the timer only lasted 60 minutes - so it would have to be turned back on for a bit.
I came upstairs to do something or other - when I came down the toaster oven had turned off -

Canadian politicians, on the other hand, are masters at denial - changing " select " words into
Fuddle Duddle
Pierre Elliot Trudeau - watch him get out of this one ! ( and his disgust of reporters LOL )

John says - Well it's not all bad - the Twin's birthdays are in February
Suzan says - They were premature - they were supposed to be born in April - which is one of the nicest months...............

It's the month where a lot of people end up depressed - and I get it.

By February - if you live in a 4 climate part of the world - you've had just about all you can take of short days and cold weather and snow.

March?
At least there's hope - February's a bad one.
( even if your twin daughter's were born in it )