A warm Hello from the home of sunshine and happiness lol - just a few vignettes of Christmas in our home......................I'm taking a break from I WANNA live there this week - too many holiday things to post about! 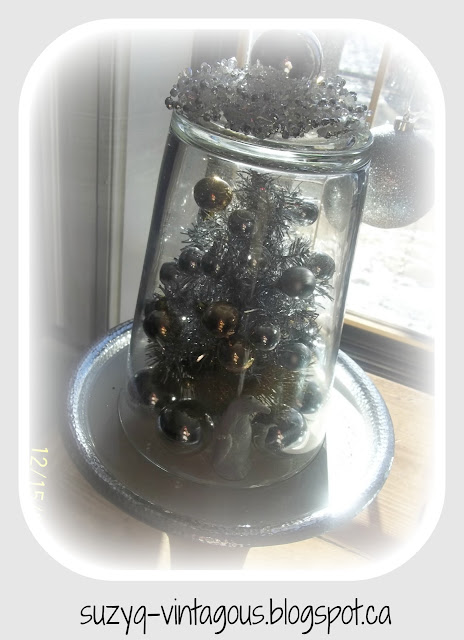 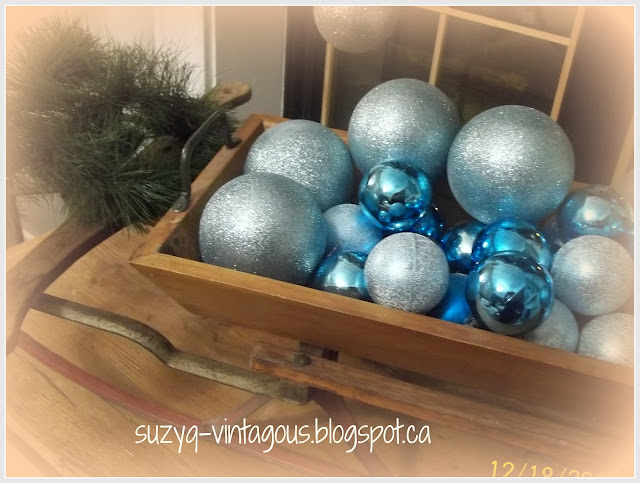 and this one is really significant for me - because I placed 20 small ornaments and 6 large ones...................
to honor the Sandy Hook victims and to keep them close to me for Christmas.  To the wandering eye they're just a tray of pretty ornaments - to me however they're so much more than that.
Tobey from tobey's trash or treasure did a Christmas Tribute in her home too - take a peak at hers too, it's so lovely. 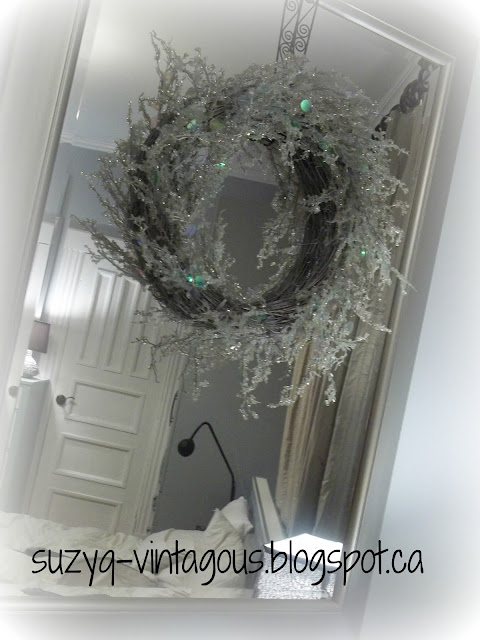 wreath in our bedroom - I tried to strategically place my watermark so you couldn't see that my bed's not made - who has time to make a bed this week? 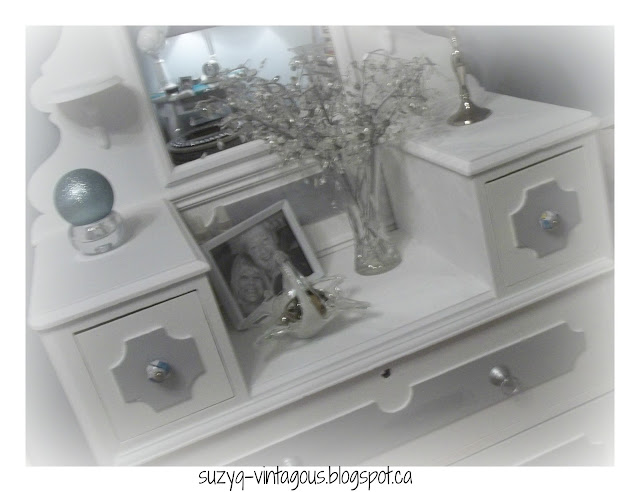 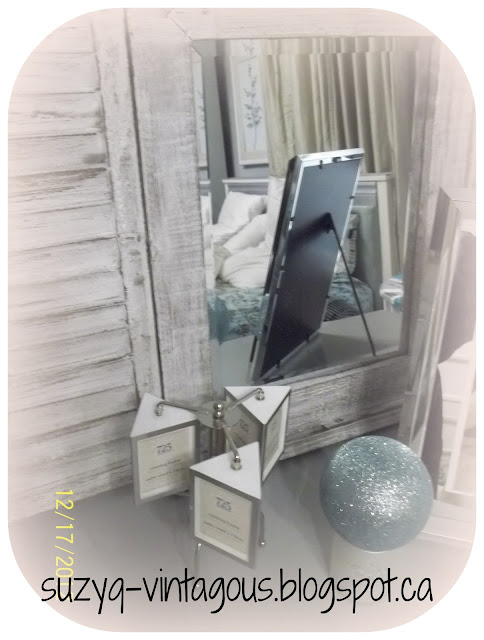 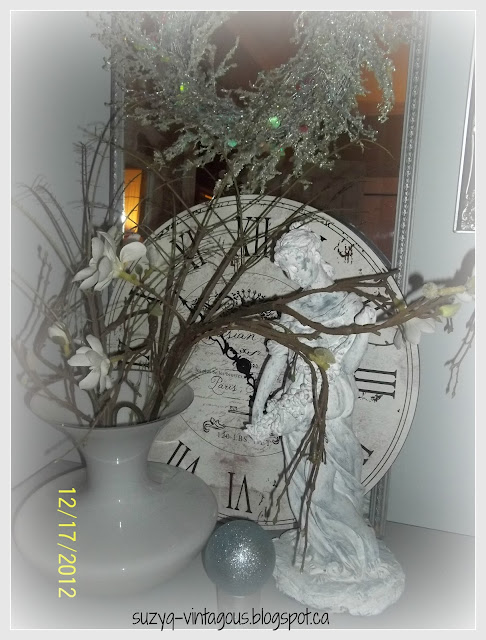 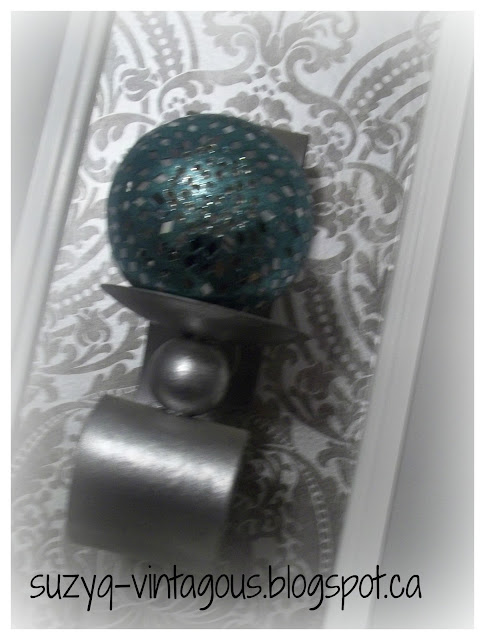 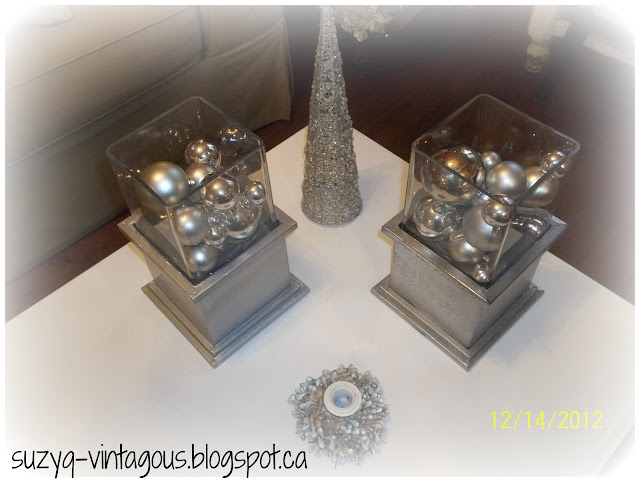 Aren't they just fantastic?  They're all over the place and every time I see one I know I have to make one.
I HAVE the planks all ready to be sawed down to size - ( and before you say I can do the sawing - trust me I cannot - I have a shoulder that's been causing me a lot of pain ) And I pictured us happily working on this
project together - side by side with Christmas carols playing in the background - snow falling gently outside
and instead this happens.........................

Suzan says - John could you cut me some of those planks we have from the pallet we found this summer
John says - WHY?
Suzan says - I want to make a pallet christmas tree
John says - Dear God - isn't the ladder enough?
Suzan says - Could you just please cut me the planks
John says - NO ( ohhhh - I don't take to that word too well ) and to be honest he doesn't say it all that much
Suzan says - What do you mean, NO ?  What kind of reply is that?
John says - It's overkill - we've got the ladder - I think the dirty pallets are just too much
John then goes to lie on the bed - with the converter in his hand - legs crossed - and there's
something about this particular position that can make me lose my mind.
There's still a million things to do after all - and making a pallet tree is one of them.  Top Priority actually.
And the longer he lays on that bed - the bigger a priority it becomes for me.
Suzan says - standing in the doorway - Do I have to call someone to come cut the planks for me?
John says - NO - give it up already - where the hell are you going to put it?
Oh I can think of the perfect place I'd like to put it.
John says - Are you making supper?
Suzan says - NO
Suzan says - I'll be too busy trying to cut pallets with my bad arm
Suzan says - Supper is overkill - you ate last night
Suzan says - eyeing his belly - Where would you put it after all?

But I am going to keep bugging until those planks are cut!
I will have myself one of those pallet sign trees - I will, I will, I tell you I will!
( stamping my feet like the spoiled baby I am and there's nothing worse than a
53 year old spoiled baby - it loses its cuteness somehow to pout when you have wrinkles )

Oh and I wanted to relay a comment I got from Carolyn -OLD CROW if anybody is wondering what to do in light of Friday - please read this - what an incredible idea - and something I would have been overwhelmed by as a young mother when everything I bought for Christmas was on lay away....................Carolyn - you are the farthest thing from an Old Crow that I know - much love

"As with another blogger that I follow on Pinterest I really thought today my in box would have no messages but there were and they were words of hurt, pain and sorrow so that's OK. What I propose since we are so strong in the blog world as in the real world that we something more and it's something we can do everyday of our lives and that's Pay it Forward. If you can, go to Target, K-Mart, Walmart and pay for a layaway or just give a smile to someone homeless standing on a corner. Let's all strive to Pay it Forward and maybe, just maybe we can change the world. Thank you and bless each of you. I'm having a hard time dealing with 20 little children being killed so in order for me to heal I think I need to Pay it Forward. Thank you all."