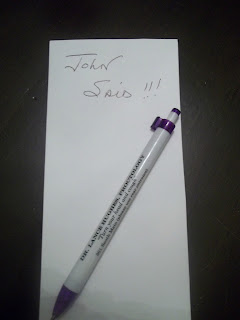 Watching something on Cindy McCain ( John McCain's wife ) and they're talking about how wealthy she is - and John says - yeah well of course - she's married to a McCain
I say - John McCain wasn't wealthy until HE married HER
John says - C'mon - McCain's is a gigantic company
Do you mean McCain's Foods?
First of all they're a Canadian company John
And second of all there's NO RELATION
Oh - maybe I was thinking of John Kerry then
( ok that makes sense I suppose - McCain's is most famous for their frozen fries - John Kerry's wife is an heiress of Heinz Ketchup - do you see the connection there? )
You have to pay close attention in this house........................

Last night we were watching one of those true crime shows and it's hosted by Susan Lucci - I think it's called Fatal Vows ( not important ) and John didn't know who she was, so I was explaining that she played a sort

John says - why do you constantly jump up in the middle of a conversation?