Fairmont Hotels & Resorts is a Canadian-based operator of luxury hotels and resorts. Currently, Fairmont operates properties in 19 countries including Canada, the United States, Azerbaijan, Barbados, Bermuda, People's Republic of China, Egypt, Germany,India, Kenya, Mexico, Monaco, the Philippines, Saudi Arabia, Singapore, South Africa,Switzerland, Ukraine, the United Arab Emirates, and United Kingdom.
Fairmont is known in Canada for its famous historic hotels and resorts such as theEmpress Hotel (Victoria) and Hotel Vancouver in British Columbia, the Palliser in Calgary, the Château Laurier in Ottawa, the Royal York in Toronto, Banff Springs in Alberta andChâteau Frontenac in Quebec City. Many of these hotels were originally built by theCanadian Pacific Railway in the late 19th and early 20th centuries.
Fairmont's portfolio also includes several other landmark and icon properties including The Plaza in New York, the Savoy Hotel in London and the Peace Hotel in Shanghai.

The original Fairmont is located in the city of San Francisco. The nearly completed structure survived the earthquake of 1906. Although heavily damaged by the subsequent fires, the hotel was renovated under the eye of architect Julia Morganand finally opened in 1907. It was later acquired by Benjamin Swig in 1945.

These hotels are furnished beautifully - they're posh and elegant and oh so tastefully done - allowing their patrons to feel spoiled during their stay.

SOMETIMES THESE HOTELS REDECORATE THEIR ENTIRE SPACES.
SOMETIMES PEOPLE BUY A PIECE OR TWO FOR HISTORICAL PURPOSES OR JUST BECAUSE THERE'S GREAT VALUE IN THESE ITEMS.
SOMETIMES THEY GET TIRED OF THEM AFTER AWHILE AND LIST THEM ON CRAIG'S LIST FOR A RIDICULOUS PRICE.
SOMETIMES SOMEONE ELSE WILL BE RANDOMLY BROWSING THE SITE AND COME ACROSS SOMETHING THEY INSTANTLY FALL IN LOVE WITH.
SOMETIMES THEY END UP OWNING THIS " DESSERTE " FROM THE FAIRMONT MANOIR RICHELIEU IN CHARLEVOIX, QUEBEC.
CIRCA - 1920 I'M TOLD
SOMETIMES THE STARS ARE ALIGNED...................

Even though this was the only image the seller had - I knew I could turn this back into the beauty it oh so deserved to be. 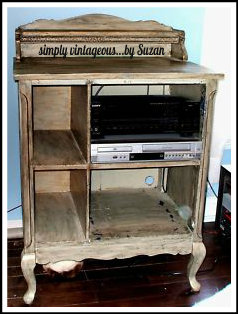 Ok this part is hilarious - I really really wanted to use Paris Grey on this piece - but I only had a very little left - certainly not enough to paint it all -
So I took what I had left of the Paris Grey - and added Old White - and some of that paint I used to paint the Wardrobe which was a custom color of Duck Egg blue and Pure white  - and some Old Violet - no measurements thinking  I would end up with some gorgeous creamy blue/green color - and I ended up with ..................
PARIS GREY !!!
So had I marked down the quantities of each I would have now had on hand the secret recipe of Annie Sloan's Paris Grey LMHO...................... 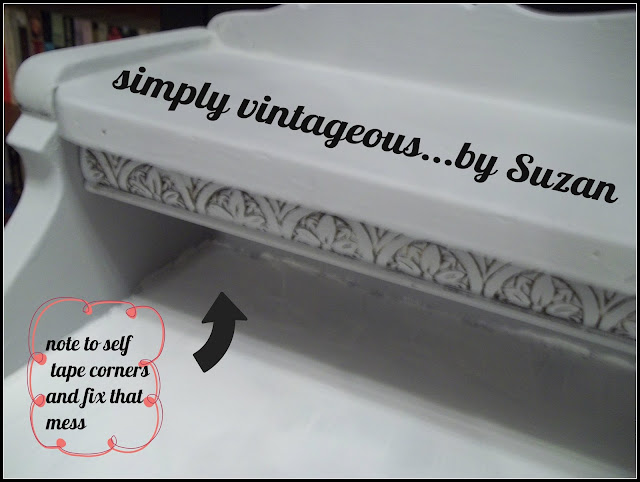 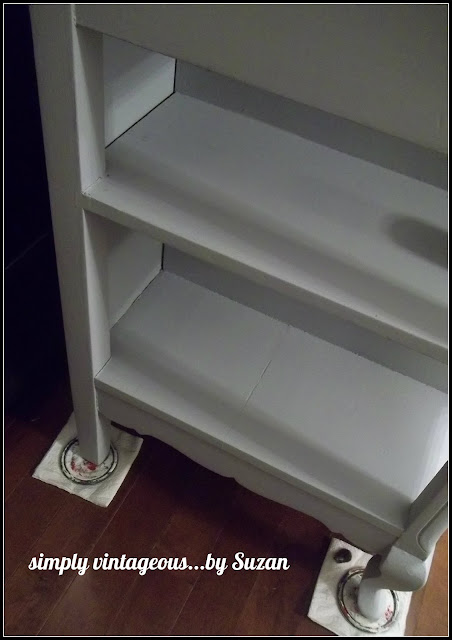 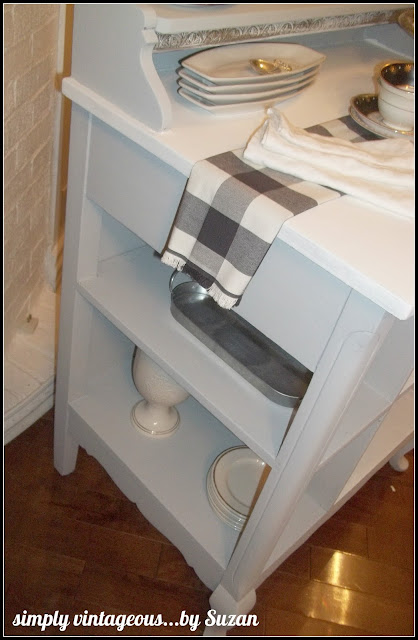 The top is a mess - with very deep cracks and humps and crevices - it really needs to be replaced -
Wouldn't a slab of marble be gorgeous? 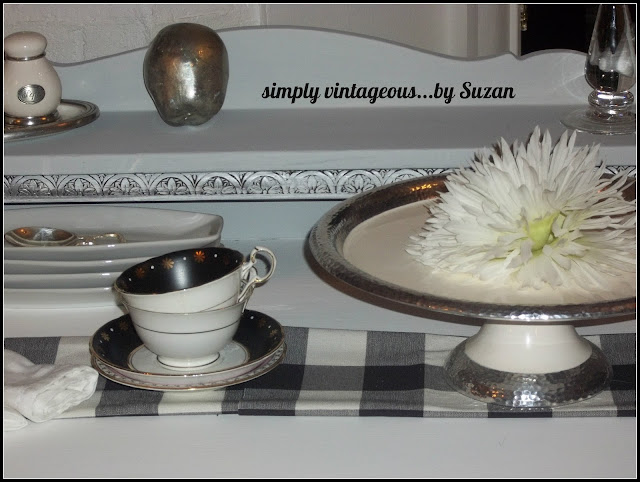 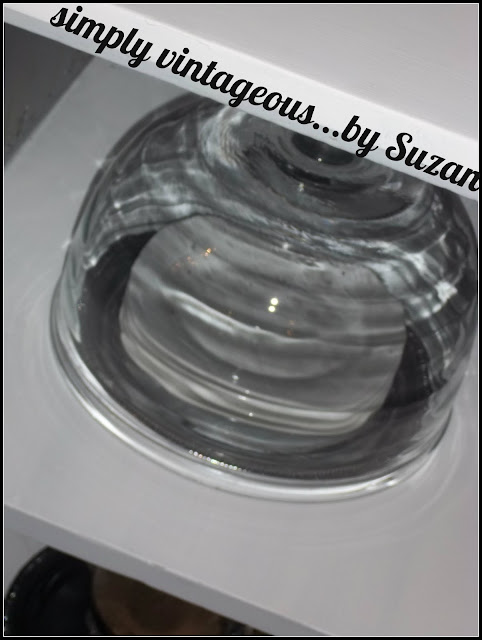 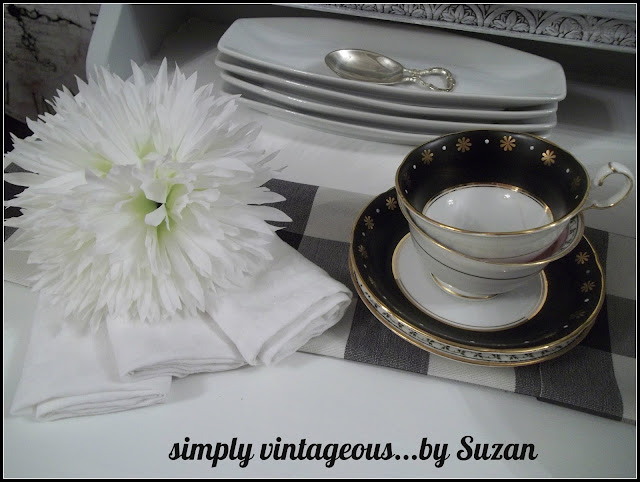 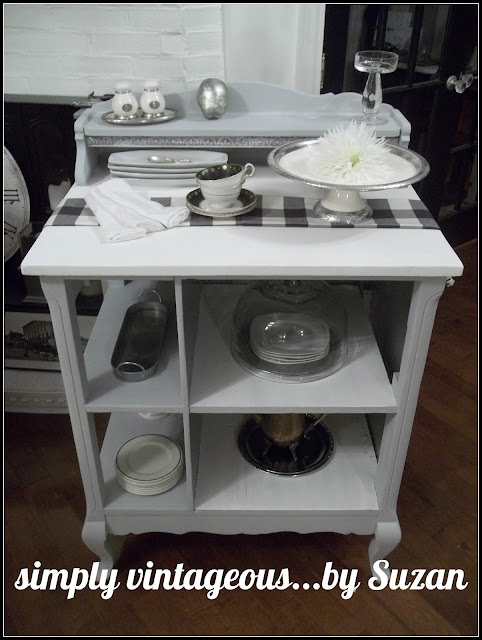 As much as I like it like this - I can so envision this as a french country type of powder room vanity
Towels rolled up on the left side - sink plumbing perfectly placed on the right hand side
But for now - she's pretty again, isn't she? 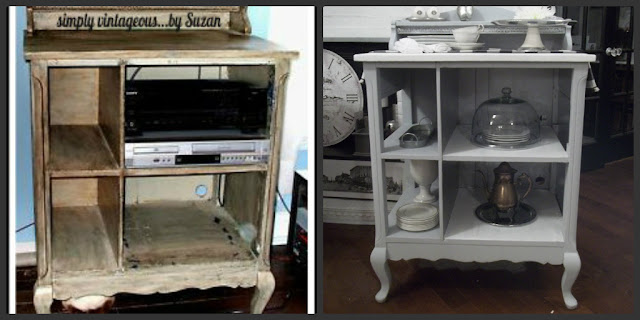 Come to think of it, it would make a pretty awesome bar cart too, wouldn't it?
Or a stand in a girly office - a printer could be tucked into one of the slots!
Lots of storage for papers  - pens etc?

Don't you think the Fairmont Hotel should give me a weekend on them for this post?
I might even consider giving this back to them for it :) 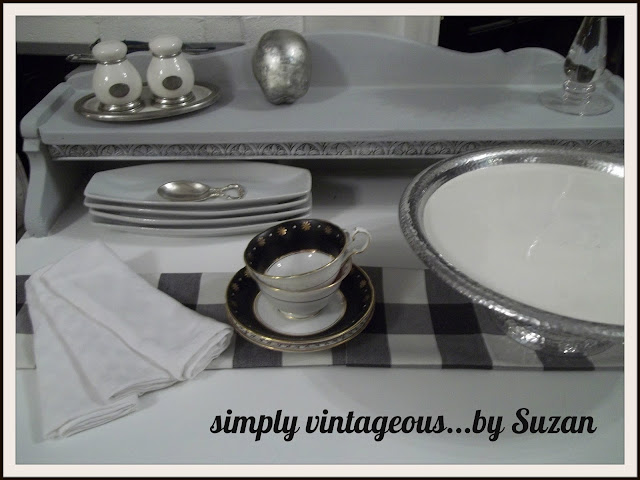 Have a great Thursday all!
Much love,