The last month has been insanely busy...................
I did furniture for Evan's room  - including a rocking chair makeover that I haven't had time to post about yet.
I finally finished the front ( enclosed ) porch
We built a deck ( with an incredible amount of help from the boys )
Had a baby shower ( and all that that entails )
Worked on the backyard so that we could accommodate roughly 50 or so people.

He was gone quite a while so I went out to see what was taking so long
HOLY COW - I'm still laughing 3 days later.

There he was...............foraging around the planters - .bent down and sniffing all the plants trying to figure out which one was basil -
Can you picture it ???

He finally looked up as he was holding on to some Rosemary - NOT THAT ONE!

My desk faces the street ( from the second floor ) so I can see what's going on out there if I'm sitting at it.
We bought a new lawn mower so the old one ( in perfect working order actually ) was put outside on the curb along with the garbage ( knowing someone would grab it )
On garbage day a man pulled up in his van and came out to take a look at it.
As he was wheeling it around I yelled out from upstairs
:" EXCUSE ME SIR - IT WORKS GREAT STILL - PLEASE TAKE IT !!! "
The man jumped and looked all around
" I DON'T WANT THE GARBAGE MEN TO TAKE IT - IT'S IN PERFECT WORKING ORDER "
The man now is frantically looking all over
' UP HERE! "  I yelled down -
Finally he looked up and waved - grabbed the lawnmower and took off.

When Megyn Kelly mentioned all the nasty mysogynistic comments he's made about women - and he pointed out that it was only Rosie O'Donnell - the audience erupted into laughter and applause.
Then he went to twittertown on Miss Kelly herself and everyone got upset.

I really AM confused by it all..............is he allowed to denigrate some women but not all women?
Can he only make fun of overweight women?
Gay women?
Women with dark hair?
What ARE the rules here?
Other than entertainment value I don't get what he stands for politcally.
Other than build a wall and make the Mexicans pay for it ( great in theory - sort of ridiculous reality wise )

Surely that's not the criteria for a good speech on policies?  Shouldn't he - oh I don't know - MENTION WHAT THOSE CHANGES WILL BE?

Can you imagine what he'd say about Angela Merkel if she disagreed with him about something?
He'd probably break twitter !

As Lindsay Graham so eloquently put it - " it's all gibberish "

Our mail man will no longer be bringing our mail................we got the keys to a group mail box up the street.
Another job made redundant.
You young ones won't remember but I grew up with a milk man....................he delivered our milk every morning..............along with eggs and butter and sometimes my Mother would leave a note - as a special treat and there on the stoop would be sitting ice cold chocolate milk first thing in the morning.
I also remember Tellers in banks.

Is it any wonder there is an epidemic of anti social disorders today?
There's very little interaction left, period.

I wonder if schools will be made redundant in the not to distant future - every child will be provided with a computerized curriculum .................as a voice on a computer tells them which book to open - no interaction with other children.

Too many of them already play virtual games .............instead of actually kicking a ball.

Some things are better today - but the ones that are not terrify me..

Our grands ( mine by the heart - John's by blood ) play soccer.
I asked Amelia a couple of weeks ago if she had won her game.

Oh dear Lord - we're going to be a whole society of Donald Trumps one day.

What happens when they lose at something in real life and have no way of handling it?
Doesn't losing sometimes and winning sometimes build character?
Or am I just being too old fashioned here?

How can you ever know if you suck or excel at something if you win everything you attempt?

Can you imagine what the FIFA games will be like in 20 years?
They'll have to give everyone the cup !

So........I had the above mentioned shower and NEVER TOOK ANY PHOTOS OF THE DECORATONS!
What kind of a blogger does that?
One who was so stressed out that she could barely see properly.
But I DID get this one ! 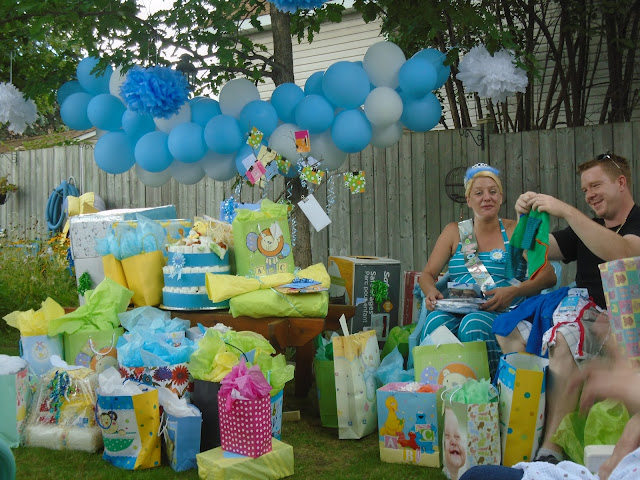 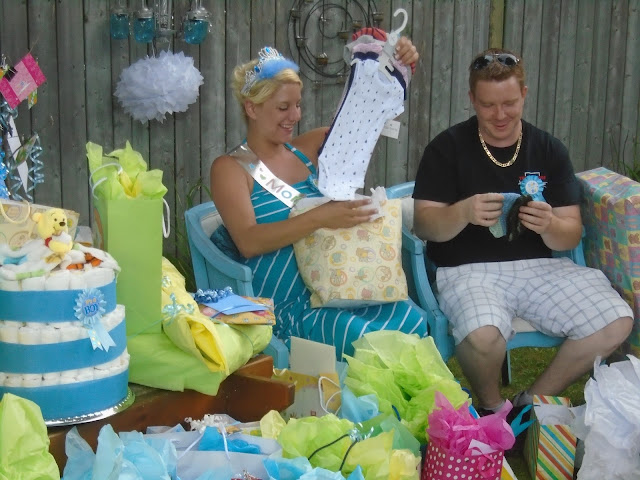 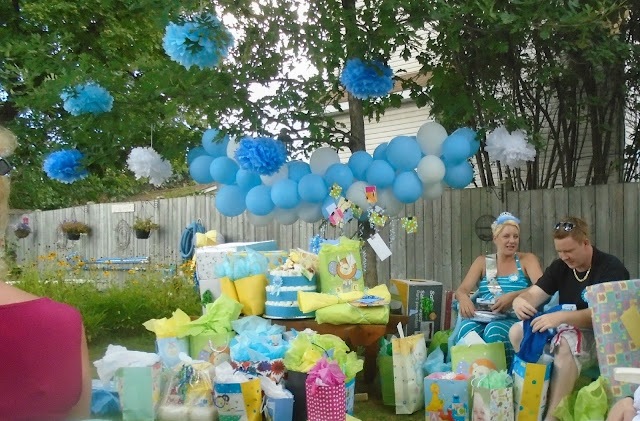 and those are just some of the gifts - they went on well past where Chris is sitting -
I also made a gift card " tree " - where Babies-R-Us gift cards were attached to branches - all  $1360.00 worth of them - plus they received cash in cards - holy cow - I've never seen anything like it in my life!

Well first we're off to buy those French Doors but then I swear to you that's where I'll be :)