Psst !  I thought you guys would never get here - get inside - quick !
Sorry for grabbing your arms like that but I don't want to leave the front door open !

Which reminds me of a time once when I was at the manicurist - having a pedicure.
An older man walked in - his wife apparently had insisted.
There were 3 women ( myself included ) sitting with our feet soaking - he sat between 2 of them - I was in the end seat ( Thank God )
They started working on his feet and all of a sudden these clippings were flying all over the place - bouncing off everything - and one flew out at the women sitting next to me - who shrieked in disgust.
She looked at me with horror - while I sat there trying to gag inconspicuously ( I have a terrible gag reflex - I gag over anything really - but this time I think it was quite justified )
The pedicurist kept shaking her head and exclaiming " velly tick nails "
I'm peeing my pants remembering this story but at the time we all sat with scowls on our faces.
Hmmm............I guess I am a scowler.
There isn't much I can't imagine myself doing.
Except for working on people's feet.
I'm grateful that there's people willing to do it because I really just can't imagine.
Whatever they earn is not enough and they have my undying respect.
_________________________________________________________________________________

Upon reviewing my year on the blog in 2015 I was stunned to realize some of my most read posts were the I WANNA LIVE THERE WEDNESDAY series - and my FRIDAY CHATS !!!
All that work I did on furniture and this is what's most popular LOL ???
Pinterest tells me that 679,000 people viewed my pins
Google + tells me that I've had 46,746,353 views on that page ( all time - not just last year )
Blogger tells me I had over a million views on my blog last year  ( a little more believable )
Why don't I believe them?
Why would they lie?
Why do I have such a conspiracy theory mind?
These are questions that need to be answered in 2016.............

The saga with the new tea towels ( here ) continues.
John used one of them last night without my knowledge.

You make living so complicated.

Last week I noticed my eyebrows are becoming barely noticeable - just fading into my head like.
So I took a pencil and tried to pencil them in - you know - like models do ?
The most perfect eyebrows on the planet?

O.M.G. !
The pencil was too dark.
I looked like Joan Crawford in Whatever happened to Baby Jane !!! 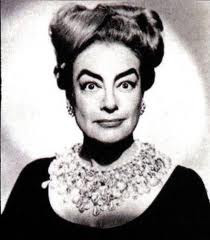 I went downstairs and sat beside John who was watching t.v. - and I didn't mention them.
But I kept them arched up to look younger - very very important ladies !
(AND I have to learn how to darken them properly because how can you lift eyebrows that aren't even there?)

Anyway - I started chatting with him - but he replied while keeping his eyes on the t.v.
When he finally looked my way - he visibly jumped back.

So far I have celebrated 32 New Years Eve's. I have celebrated with family, with friends and loved ones, and also by myself.
I have tried to re-invent myself every time ...with ridiculous resolutions to better myself...and failed. EVERY TIME. diets, exercise, fashion, being nicer to those I dislike, taking the higher road, turning the other cheek, and so on and so forth. What I have learned is that diets suck, I last an hour and then sob into 12 kit kat wrappers screaming at myself that I'm fat...ok, so its 13 wrappers, but whose counting? Exercise is boring when you're alone. exercise is boring at the gym. exercise is just &@#^ boring.- fashion changes more than I can keep up with or afford. Being nice to people you do not like makes you repress too much anger and I'm almost positive that fake smiling too much leads to irritable bowel syndrome, better to cut them off completely and save on toilet paper... the higher road is too high sometimes, it gives me nosebleeds. and quite frankly this turning the other cheek nonsense is too frustrating. All you're left with is 2 bruised cheeks and an idiot who thinks they can get away with it...I guess what I'm trying to say is...you can make all the resolutions you want, it won't actually change you. Instead of trying to change ourselves this year, why not just OWN ourselves?
so if you're hungry...eat.
if you're upset...cry
if you're angry...let it out
if you're a hopeless romantic...be romantic!!!
if you're a gym enthusiast... go to the gym (i dont get it but i respect it lol)
if you bite your nails...dip them in sugar to sweeten the deal!
if you're a fighter...fight for everything you believe in without compromise, just know when the fight is over.
if you're happy...teach others.
Just please don't make yourself miserable trying to live up to some unattainable version of perfection , you already are perfect. a perfect YOU! And nobody, nobody can do it better!
Don't forget every cloud has a silver lining.......it may not be REAL silver and it may leave one of those gross green rings, but who cares...it always washes off
Happy New Year!
_________________________________________________________________________________

Zulily just sent me an email advising me to STOP EVERYTHING
So I am.
Thank God they sent it or I may have just gone on writing forever ........you know
like...........

Now isn't that just the song you needed stuck in your head all day today?

You're Welcome !
Have a wonderful day everyone - and an even better weekend
I'm off to buy a lighter eyebrow brush !
See ya later alligator - plant you now and dig you later ♥
Hugs
Me