THE MOST VERSATILE TABLE ! 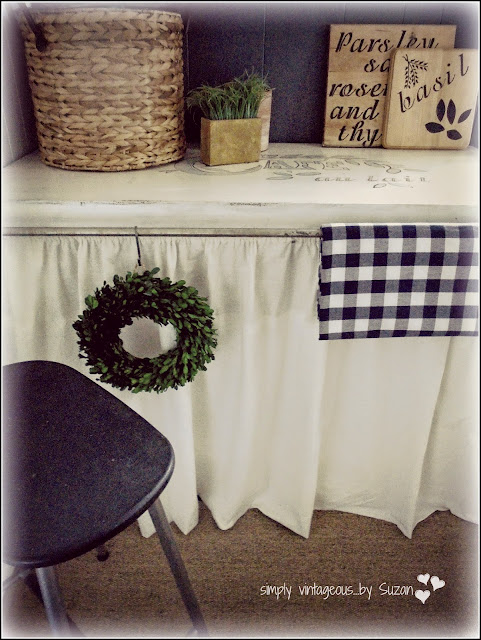 This will be used as a :
folding " station " ( washer and dryer are to the right of it )
craft " station "
storage  ( hidden behind the curtains )
prep area ( for outdoor pool parties - since access to the back yard is off this little room ) or a place to mix drinks
It's even a place to paint small items !

How's that for versatile? 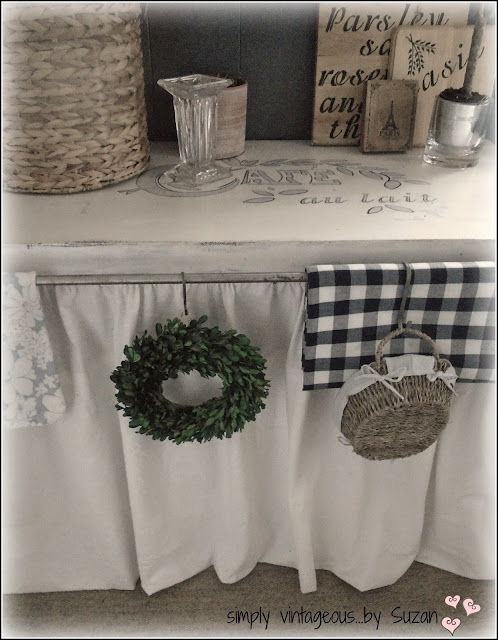 I actually used this as my kitchen island for awhile in our last house...................then my daughter took it to keep on her ( oversized ) balcony.
But she's moving - and no longer needs it - so Mom took it back - with big plans of repurposing it as a potting bench......................but because all well laid plans of mice and Suzan often go astray - it's ended up in the mud room.
I added a couple of shelves to store items..................just added them with metal brackets on the inside of the legs and then took a set of Ikea curtains ( white linen ) and used them to hide all of that.
Believe it or not - that's organized chaos on those shelves 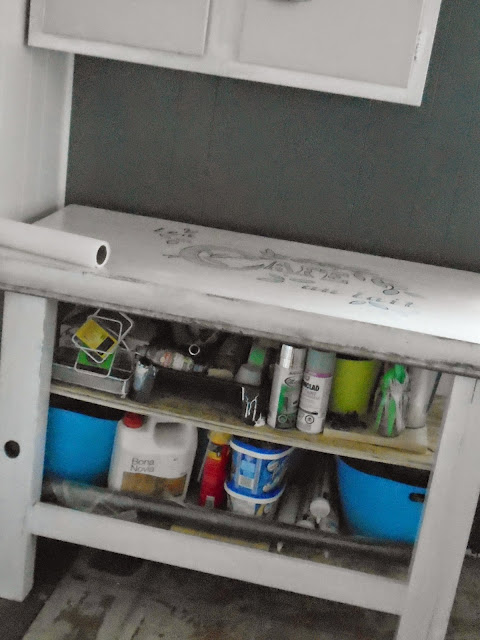 The image on top is from the GRAPHIC'S FAIRY  - this one here to be precise - I took away a little & added a little.
This image was done before my daughter took it - it was once black but being out in the elements it faded.
After giving the table a quick white wash - the image turned grey - so I outlined everything with a black sharpie and left the image a greyish color. 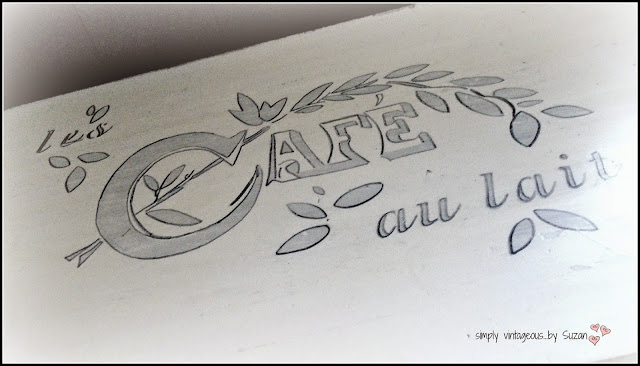 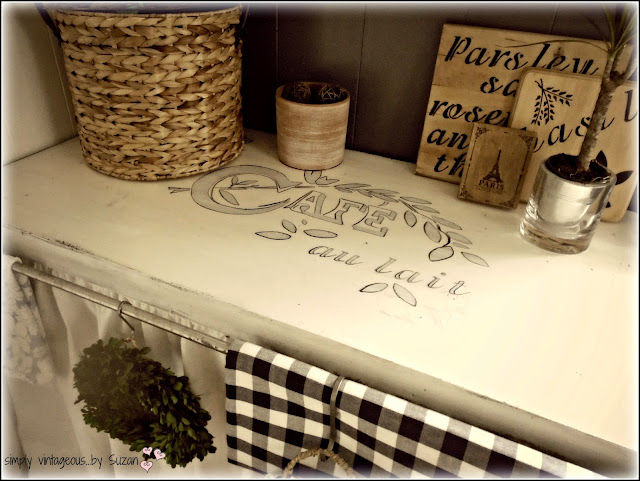 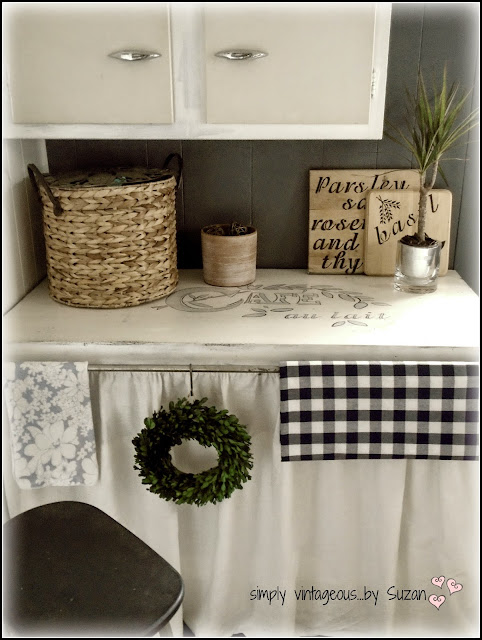 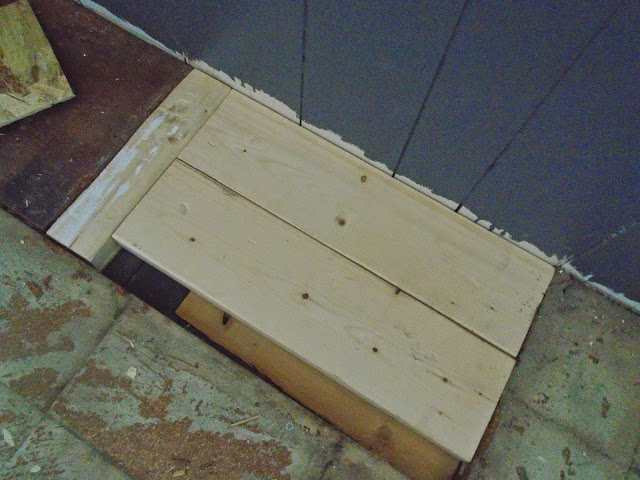 You know, it would have been nice, very nice indeed if just one room in this house wouldn't have turned into a major disaster every time we started to renovate.
This particular room has been a nightmare ( well they all have )
We lifted the flooring and there were large gaping holes everywhere.................I don't know how we didn't go through them every time we took a step in there the last year.
It's almost done - but not quite.

But THE MOST VERSATILE TABLE is done ! 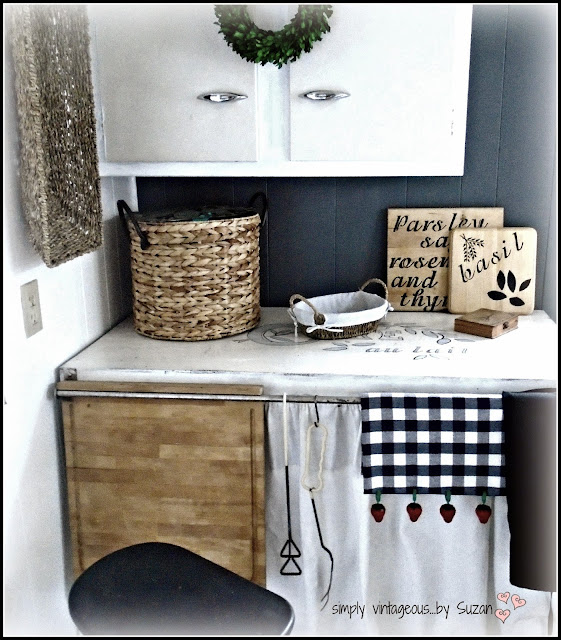 John says - What in God's name are you doing exactly?
Suzan says - Trying to get a shot of the back entry 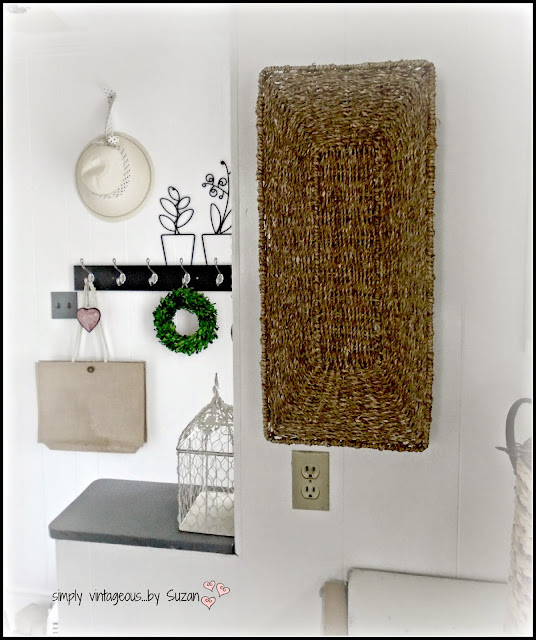 Funny he should call me that - because I want to put up a clothesline outside - and get a really nice straw hat and basket - and come into the mud room a little breathless - with a perfect strand of sun kissed hair falling over one eye - my freckles pronounced from my light golden tan - a la Martha Stewart - look up at John - smile warmly and say " honey - the clothes are dry " and fold everything on the table while he makes me a martini - as bunnies skip across the grass and birds are chirping and soft classical musical plays in the background of a completely finished renovated house.

Until that happens maybe I'll just make myself a martini.

And keep working at it.  One room at a time.

I don't have freckles either.

Oh and calling my table the most versatile table?
I guess all of them are, no?
LOL
Still, having one in the mud room is a good thing.  ( see?  I'm already talking like her )

If anyone taped us working you'd have the the most successful comedy show ever.
Dumb & Dumber attempting to renovate a house.
It's hilarious.
And just a little sad.

Have a great one everybody !
Much love,
Me