I want a new kettle.
This one in particular 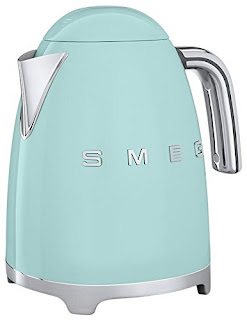 Which I first saw over at BUTTERFLY & BUNGALOW  -

So while Americans can get to own this beauty for 129.95 with FREE SHIPPING ( still a lot of money for a kettle but worth the splurge ! ) we have to pay 199.99 PLUS SHIPPING.

I can't do it.
I just can't.
Every time I turned it on I'd want to vomit thinking how ripped off we are.
TRUE NORTH STRONG AND FREE ?
Oh Canada - we're the true north and ridiculously priced.

Which reminds me of other electronics.
In the last 6 months we've purchased :

A Pentax camera
A Bose sound system
A Tablet
A Laptop
A Desktop
A 49" T.V.
A new cell phone ( we won't even discuss what the phone is worth k? It's S.I.C.K.)

Anyway.............we could have installed a new bathroom for what we spent on all that crap necessary stuff.
I'm not joking - we really could have.

I'm going to tell you the most embarrassing thing now..............
That new phone I got?
Well I didn't even realize that phones had advanced enough so that you don't have to actually text - you can just speak your text into the mike on the phone.

I FELT LIKE SUCH A GENIUS WHEN I FIGURED IT OUT !

The next time my daughter came over

Mom says - You're NOT going to believe this but I can just speak into my phone instead of actually texting AND I figured it out on my own - I'm like a genius
Daughter says - I almost can't bear to tell you this Einstein but phones have been like that for a long time now.
Daughter says - you have to keep up with the - OW - what the hell was that for? ( rubbing her head )
Mom says - SORRY BUT YOU DESERVED THAT - COULDN'T YOU JUST LET ME LIVE WITH THE ILLUSION ???
Daughter says - I don't know how you manage not understanding any of the devices you have !

We were really late on the bandwagon with high definition also.
As in we never had it until last week - when our Plasma died and we moved into the new era.
( we truly thought we were ahead of the times when we bought the plasma 14 years ago )
So my take on THAT is -
I'M NOT SURE I LIKE IT !
I have a brain that registers every single detail - no matter how tiny - and oh my God - I don't know how appealing it is to see a close up of someones zits - or scars ( do you know how many actors and actresses have scars on their chinny chin chins ? )
I EVEN NOTICED THAT ONE ACTRESS HAD A HAIR GROWING ON HERS........
Which depressed the hell out of me - because if their makeup artists can't see them to remove them then there's really no hope for me and my chin hair saga.

I also notice bloopers.
e.g. - we were watching an old episode of Mad Men and Sterling Cooper was drinking a White Russian ( YUCK ) he took a few sips and it went down accordingly and the next ( supposedly seamless ) frame the glass was full again.

It's March !
Hurray !
Here's what the forecast was for the first day

Issued at 10:34 Tuesday 01 March 2016
Summary
Blizzard conditions with gusty winds and visibility frequently near zero in snow and blowing snow are expected or occurring. An intense low pressure system developing over the Central United States will graze Southern Quebec Wednesday and continue toward the Gaspe Peninsula. It will leave significant amounts of snow of these areas. The combination of strong northeasterly winds and cold temperatures with snow quickly accumulating will give blizzard conditions tonight. There may be a significant impact on rush hour traffic in urban areas. Consider postponing non-essential travel until conditions improve. Blizzard warnings are issued when widespread reduced visibilities of 400 metres or less are expected for at least 4 hours. Please continue to monitor alerts and forecasts issued by Environment Canada. To report severe weather, send an email to tempsviolent.quebec@ec.gc.ca or tweet reports to #met

Aren't you glad you live wherever you do?
And if you live in the southern States or Australia or Greece - or anywhere where you're officially wearing flip flops ..............just keep quiet about it, ok ?

My girlfriend's Mom used to sing this when we were kids - with the way I am with technology it should be my anthem really.

Hope you all have a wonderful weekend
Spring is right around the corner - but then again that all depends on what corner of the world you live in :)
Kisses & Hugs,
Me