A Friday chat ( about this and that )

When dreams die - they die huge.

I always wanted to meet Joan Rivers - always wanted to sit down somewhere with her and have a glass of wine and always assumed that would someday happen ( I just hadn't quite figured out HOW to make that happen )
People that make me laugh are my favorite people - and she made me laugh.
I went to a lot of her shows here in Montreal ( at the Just for Laughs festivals )

We lost too much funny this year

And three of my very own personal favorites

John Pinette - oh my gosh - how I adored him

At a time when the world needs more and more of a reason to laugh - their absence will be sorely felt in my world.

RIP - I'm feeling a little jealous of Angels right now because I know you three are making them laugh their wings off.

I'm literally losing my last thread of sanity with renos and furniture makeovers - and yet I had to
ask if this was still available - I just HAD to - don't ask - the devil made me do it.................because the angels are currently too busy laughing.
( when you're that close to being committed into the loony bin - that's the sort of thing you do after all)  I'm too afraid to mention it to John because I'm terrified he may have the power to sign the papers that will see me taking a lonnnng break from reality )
So part of me is hoping I get it
And part of me is dreading it 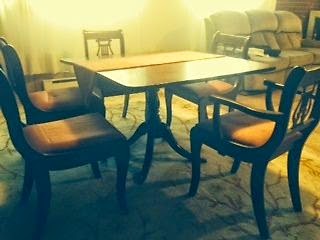 Listing reads:
4 chairs plus 1 with arms
4 ft x 4ft square table - both sides fold down for easy storage
Buyer must pick up - no deliveries 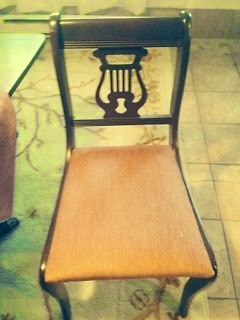 How could I possible NOT ask about it?
The price is reasonable - it's a drop leave table - and 4 harp chairs AND a captains chair to boot!
And why am I asking you guys - who are every bit as certifiable as I am? 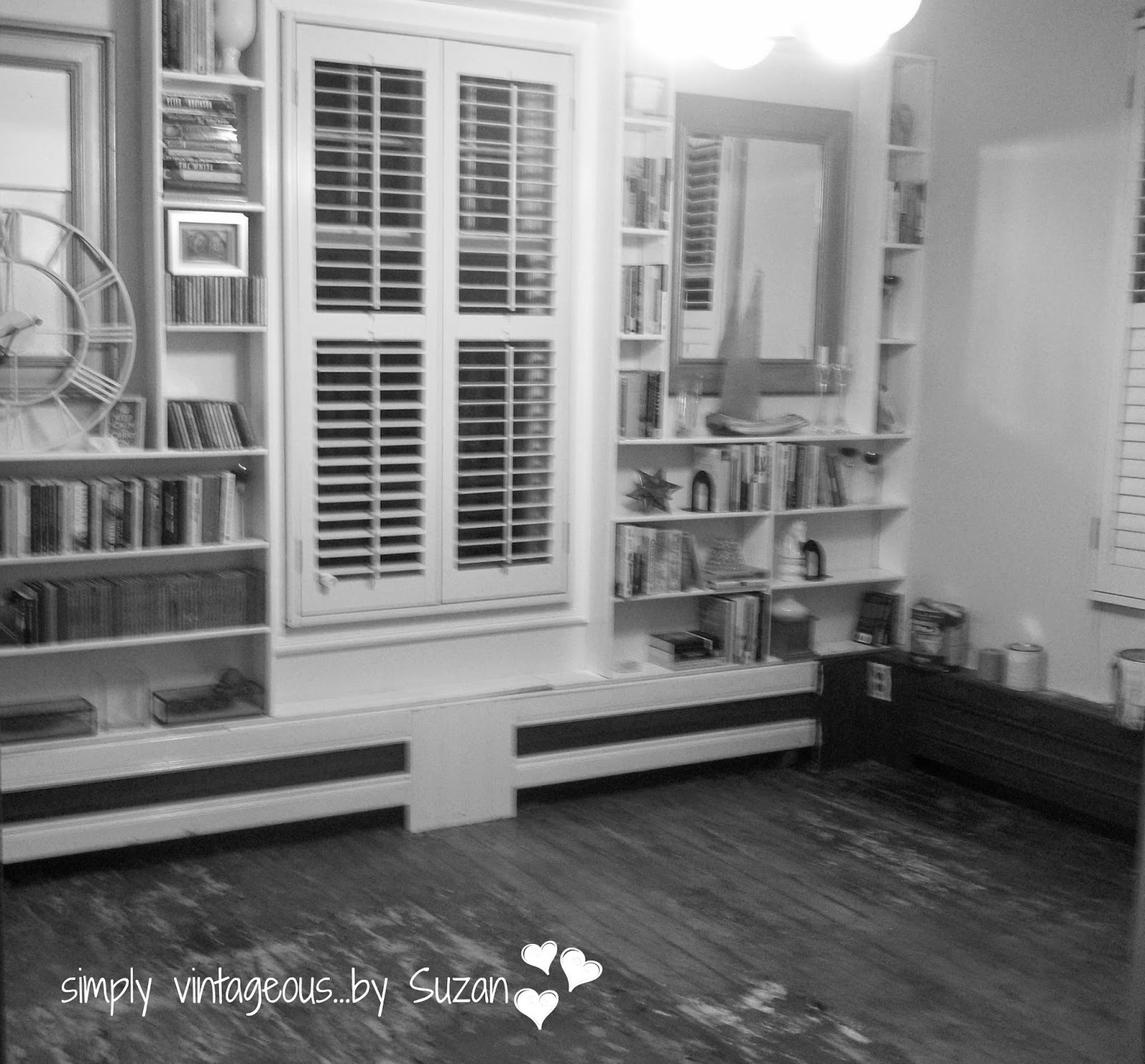 Because of the stench -
We're scraping off layers and layers of crap here - some of it almost a hundred years old................( I use the term " WE " very loosely - since I have not crouched on that floor yet - but it's every bit as exhausting and nauseating to watch him doing it - trust me - I keep trying to explain that to him )
And I'll be crouching when it's time to refinish them.

I told him we had a mask for the stench 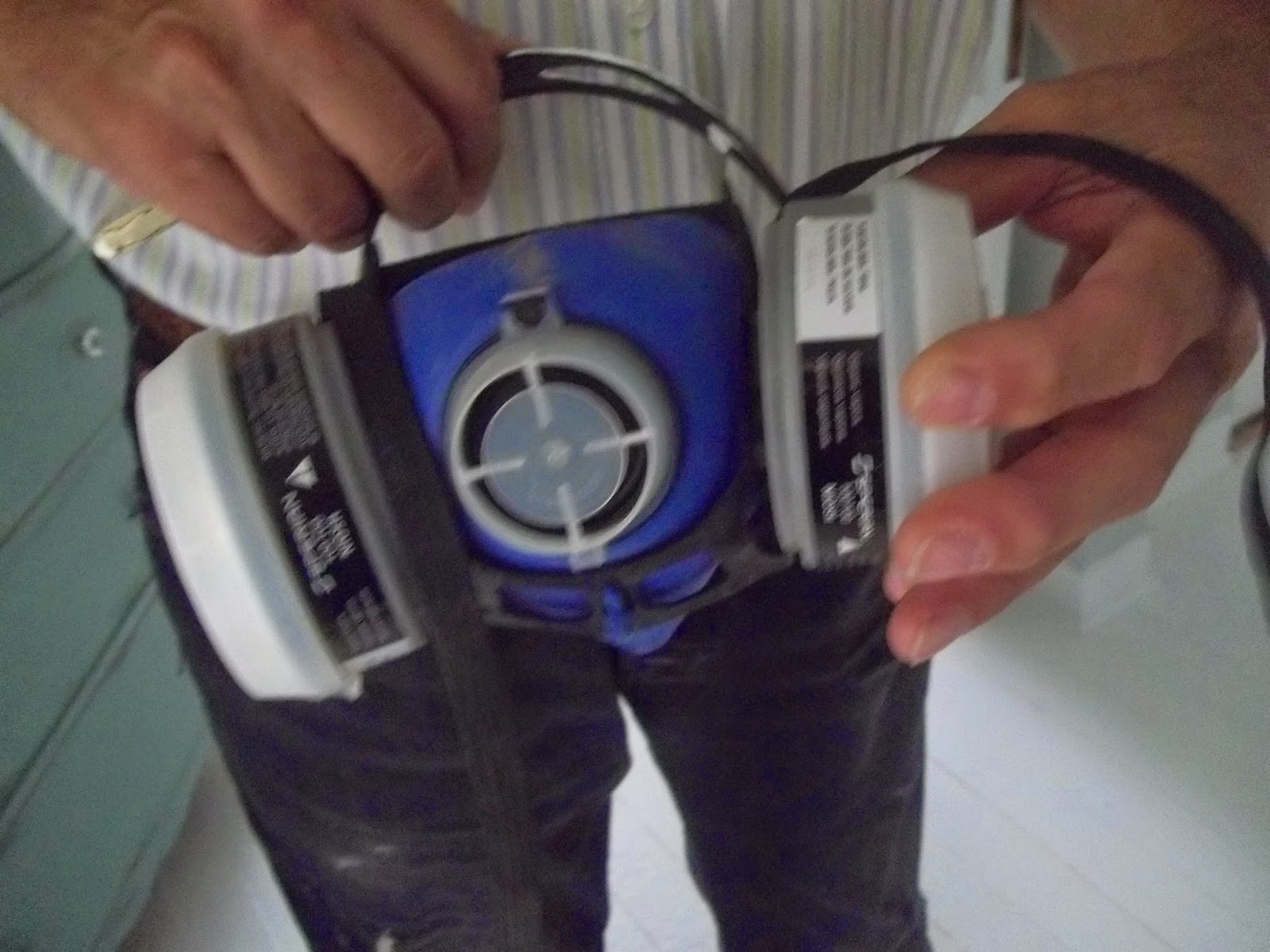 John says - DO NOT PUT THAT ON YOUR BLOG
Suzan says - Do you seriously think I put everything that goes on in this house on the blog?

I met a lady at Home Depot last week - she was sawing a piece of molding.
I can't use a saw.
And I can't use a blow dryer.................
Embarrassing when you call yourself a DIY'er and you can't use one of the most fundamental tools of the trade.

I told her how impressed I was - and we got to talking a little bit.

For those of you that are wondering why we're doing the floors ourselves - here's da truth about that.

We've completely run out of reno money - zilch - nada - nothing left - so we have no choice.

And for the rest of you wondering how wise a choice white slipper covers are - I'm here to tell you that after 24 hours they still look the same as the day they were put on ( which would be yesterday )
Perfect.
Best decision I ever made !
Except there's now a blanket ( white ) on the chair because I got tired of hearing myself 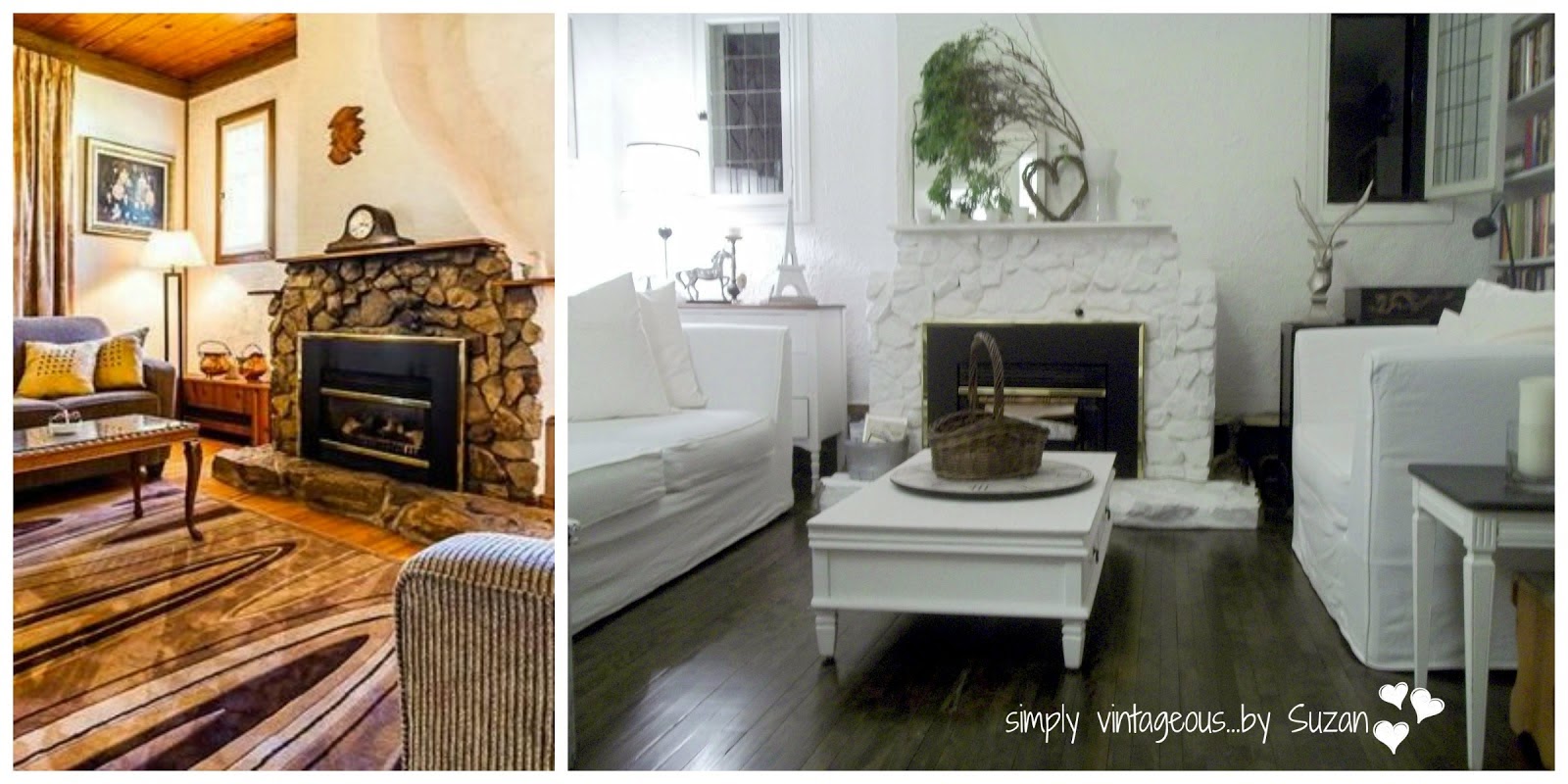 I can't imagine living without them - they are my fast food ( I will NOT call them junk food ) of choice - and I really could eat them at least once a week.
We were slow up here in Montreal being introduced to them - so I only had my first one when I was a teenager and I've been hooked since.
A world without tacos?
Not a place I'd be interested in living in.
What a cold - lonely - empty place it would be ( so you see how much stock I actually put in them )
John's ok with cold and empty I suppose -
But I have a theory about taco lovers.
Taco lovers LOVE life - they love to dance - they love to be surrounded by flowers - they're passionate about everything they do - everything they see -
They are touched by stories and they laugh and cry easily.
Oh and they love to paint furniture.
Taco haters are boring ( for the most part - of course there are exceptions to every rule)

My menopausal body is so confused over this whole day and night situation.
But really - who said you HAVE to sleep when it's dark?
And who said you can't have ice cream for breakfast?
Rules - rules - rules -
I used to follow them.
( kind of )

Yesterday when Mary ( the slip cover girl ) was here she asked for some water - when I opened the fridge she said - Oh I wish it were later so I could have a beer.

Wish it were later?  Than 12 noon?
Well I smashed THAT rule to smithereens quickly let me tell you
Really, who said you can't have a beer at noon?
( in a wine glass - it must always be in a wine glass - no matter what time of day it is - that's a rule I never break )
It tasted good.
It tasted sinfully good actually ( so the devil probably made me do that too )

John says - What the hell are 2 beer bottles doing on the counter?
Suzan says - Mary and I had a beer
John says - It's not even 3 o'clock
Suzan says - We had one each 15 minutes ago - sheesh - what are you - the beer police?

(is lying about the time we actually had the beer a crime - or just an admission to myself that we really did do something wrong?  These are the questions that haunt me night and day )

John says - Well it's pretty early - the rule of thumb is
Suzan interrupts  - DON'T TALK TO ME ABOUT RULES - please.  thank you.