John and I are polar opposites ( I suppose you know that by now ) although strangely enough there are things we totally agree on.
Music is not one of them.

Oh did I mention that although he hates country music for some inexplicable reason he loves Dolly Parton.
Hmmm - now I wonder what Dolly has that's different than - I don't know - Loretta Lynn or Tammy Wynette ?
He gets a far away wistful look in his eyes when he listens to Dolly sing.
Bet he'd drive down to Dollywood in a heartbeat....................

AND speaking of Dolly Parton -
I haven't laughed like I did last night in years. You know that laughter when you have to hold your stomach because it's hurting?

John says - Why the hell are her nipples flashing?
Suzan says- What are you talking about ?
John says - dead seriously - Look - her nipples are flashing on and off

OMG - the way the camera light was facing her caused these sequins to flash repeatedly - it was the funniest thing.
You probably had to see it to appreciate it.

Here's some of John's comments

I've been told all my life I looked like Goldie Hawn - I've never seen it as much as others did until I came across this old photo of Goldie - I really see it in this photo !
John and I were in Italy ( Lake Como to be precise - where George Clooney lives a good part of the year )
And we were getting on a boat to tour the lake when all of a sudden a SLEW of people starting rushing towards me - with their cameras flashing - yelling Goldie - Goldie !
John says - Oh my God - they think you're Goldie Hawn - say something - they're going to crush us
But I just gave a huge smile and waved...........I swear to you I waved like I WAS her - we all need our 15 minutes.
Somewhere in Italy there's a bunch of homes with pictures of me in albums - 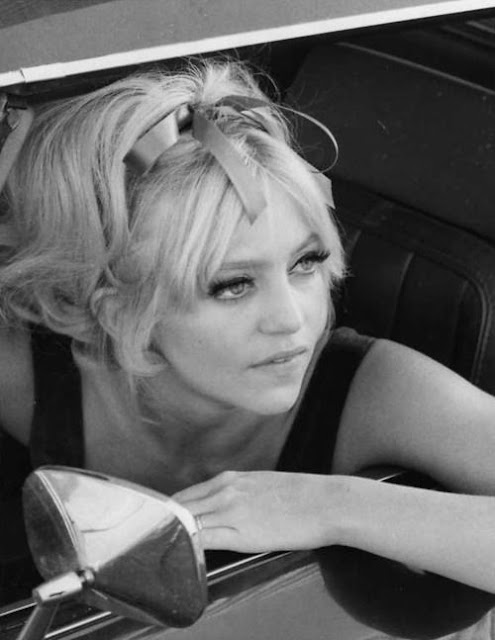 This year has started off soooo shitty -
I had the flu from hell - a cold that wouldn't leave - my back has now gone out on me twice and I have strep throat.
The penicillin AND the infection have left me exhausted - but still - last weekend I decided I had to get out and go for a long walk.
It's been unseasonably warm here ...........7 degrees for us ( so 45 degrees for my American soul sisters )
Anyway off we went - and went and went.............
John says - I think we should turn around -
Suzan says - It's so nice out - lets keep walking

And we walked until we got lost.

This would not happen when I lived down town where I know every inch of every neighborhood - but here in the suburbs?  It happens more than I care to admit.

John says - Do you know where we are?
Suzan says - Of course I do !
John says - Well it feels like we're going around in circles.

He's still mad at me - tells me his toes hurt - and I don't know why I think that's so funny - but I do.
So much so that every time I think of it I go into hysterics -
So here's me signing off with laughter - the very best way, right?
It's been a laughing kind of week.

Oh and I've been singing this song to John since our walk - I LOVE these Scottish Lads !