I don't like them, period, they offend my design sensibilities, lol ( they really do though )
They are eyesores to me - and although they are making them flatter and flatter they
keep getting bigger and bigger and take up far too much eye space on the walls, consoles, etc
They destroy mantels - which I know is the best place to keep them - but the decorating
possibilities that are lost because of them is a shame. 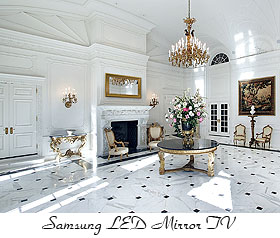 that's the answer - over the mantel - a clean beautiful mirror - which turns into a t.v. when needed. 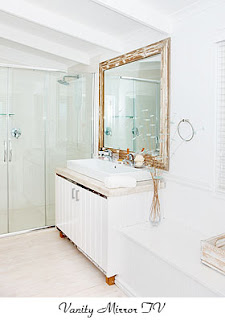 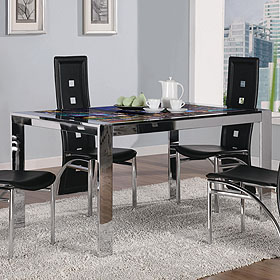 THANK YOU MR SAMSUNG - you must have been an interior decorator in your previous life.

Now my second beef with T.V is it's all crap -
The same shows over and over again - all reality which although I am guilty of watching a couple of them, seem a little creepy - millions of people just watching people living their lives seems absurb to say the least - almost like THE TRUMAN SHOW ( with Jim Carrey )
HGTV is perpetually on one of my T.V. 's like background music, lol - but I have seen every show so many times that I could turn the sound off and lip sync ( HGTV Karoke anyone? ) every word they are saying -
And the commericals?  INSULTING for the most part - so much so that when I see one that uses a little thought I get excited................for the most part I press the mute button as soon as they come on.
Back in the good old days ( the 70's - I know I know dating myself again ) there was so much choice, every night - all different - variety shows - comedies - dramas - mini series -  each show came on ONCE a week - so there was actually something to look forward to. Not to mention Johnny Carson who can simply not be replicated, period.

and then of course HGTV - because even though I have seen every show - as many times as they are aired - I can't help it - I am addicted.

And those are Tuesdays beefs everyone.