John says - Why are there kidney beans in the spaghetti?

Suzan says - It's a new recipe I found - Kidney Beany Linguini  ( I think very quickly let me tell you )
John says - Think I'll just make a sandwich Suzan
Suzan says - Oh will you just try it already?  I can never try any new recipes because you're so picky - and I found this and have been dying to try it - just give it a chance
John says - mmmm, not bad at all
Suzan says - You see?

and actually my Kidney Beany Linguini was amazingly delish!
you must try this next time you take the chile out by accident 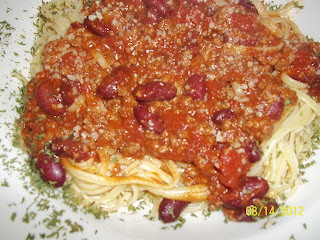