Again - on Craigs List - at this point I don't even need to use my imagination - this looks like DIY GOLD to me!
They don't have to stage it - or clean it up - or do anything except what they did - take a photo with tons of crap on top of it - and all I see is French Provincial - and curves - and loveliness 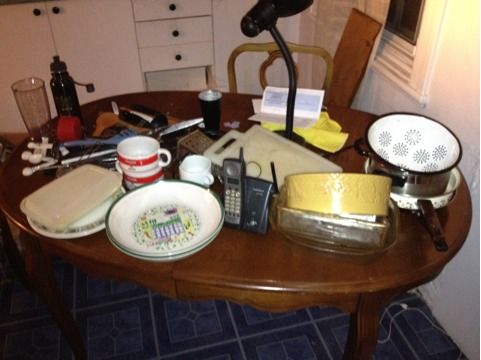 it comes with 4 chairs - tattered and in pretty rough shape but I've been dying to try out dropcloth as seat cushions which everyone seems to be doing - and it has a leaf - AND IT'S MINE - picking it up later today!

Suzan says - John do you think we can pick up a table and 4 chairs?
John says - I thought you were going to finish what you have in storage before buying anything else?
Suzan says - But these opportunities don't come around often
John says - Do you have a picture of it?
Suzan says - I don't want to show you the photo
John says - Well here's the deal Suzan, I NEED to see a photo to see if it'll fit in the car
Suzan says - FINE, but just look at the table - try to disregard everything else in the photo