What the duck is going on around here? ( you.will.not.believe.this.one.)

Yesterday I was out planting, a little nervous because of the ground hog that had made it's presence known
this week ( by coming out right while I was working in the yard and ambling along the side of the fence )
cursing under my breath as the squirrels were running around everywhere dropping branches from trees,
when I heard a strange sound.
Cocking my head to one side to concentrate ( much like a dog since I happened to be on all fours at that point ) I could very faintly hear water lightly splashing.....................

Suzan says - We need to have the pool cleaned THIS weekend
John says - No one else has started their's yet around here
Suzan says - I don't care - we need to do it NOW
John says - There's plenty of things to do and -
Suzan cuts him off - screaming - I CAN'T TAKE IT ANY MORE
Suzan says - I feel like I'm living in the wild
John says - What the hell are you going on about now? 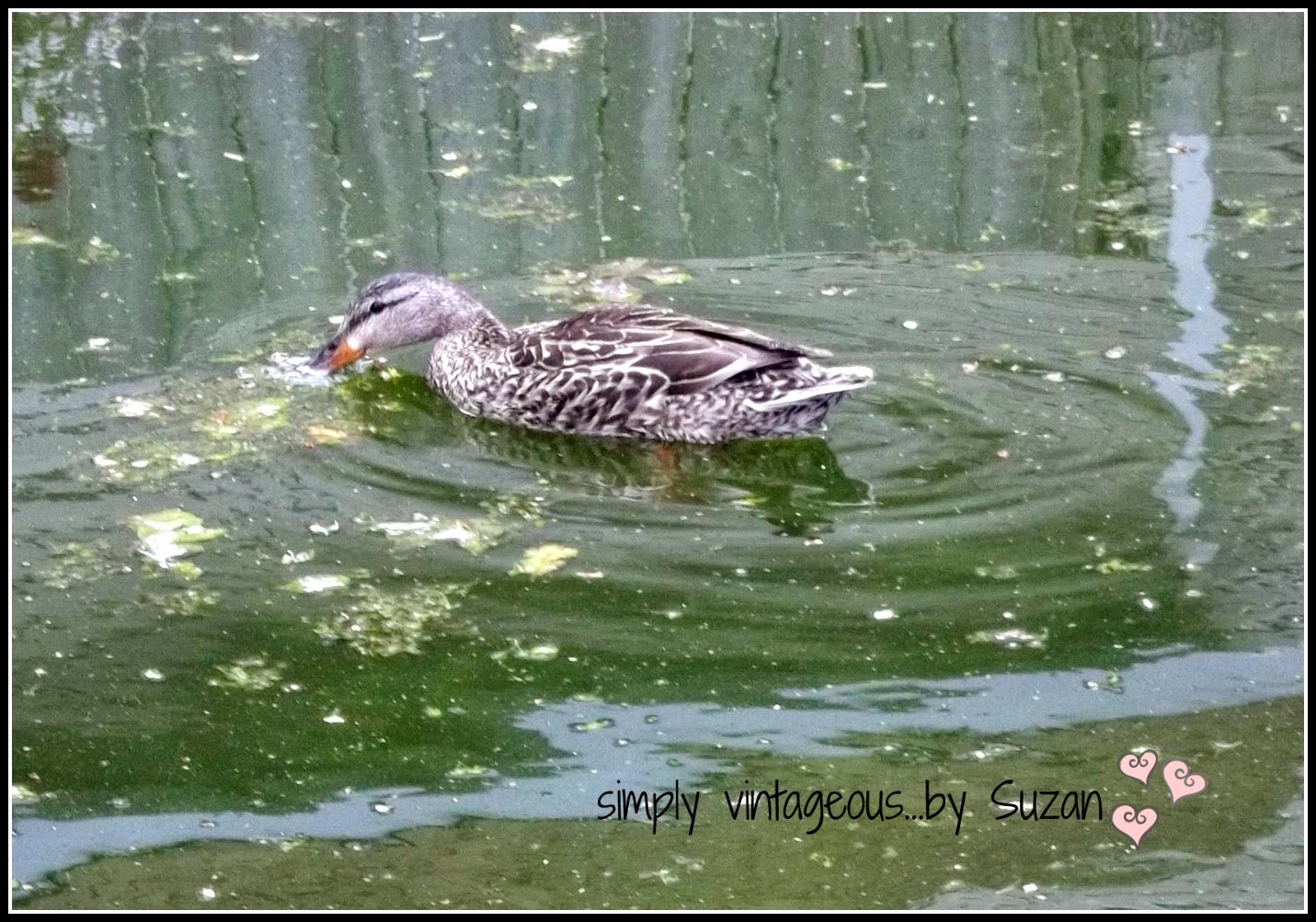 What's next?
The Loch Ness Monster?

Suzan says - It's because the pool is filthy - it looks like the river - it's confused
Suzan says - I'm not cut out for this - I want to go back to the city - I need -
John interrupts - Ok Scarlett O'Hara - we only moved 15 minutes from down town - let's not get overly
dramatic over all of this.

I'm seriously traumatized here - every time I walk out the door I bang it shut to scare off all the wild life -
BUT THEY'RE NOT AFRAID !!!

My daughter says - This is so awesome Mom - you're so lucky !

In my world lucky would be winning the lottery. 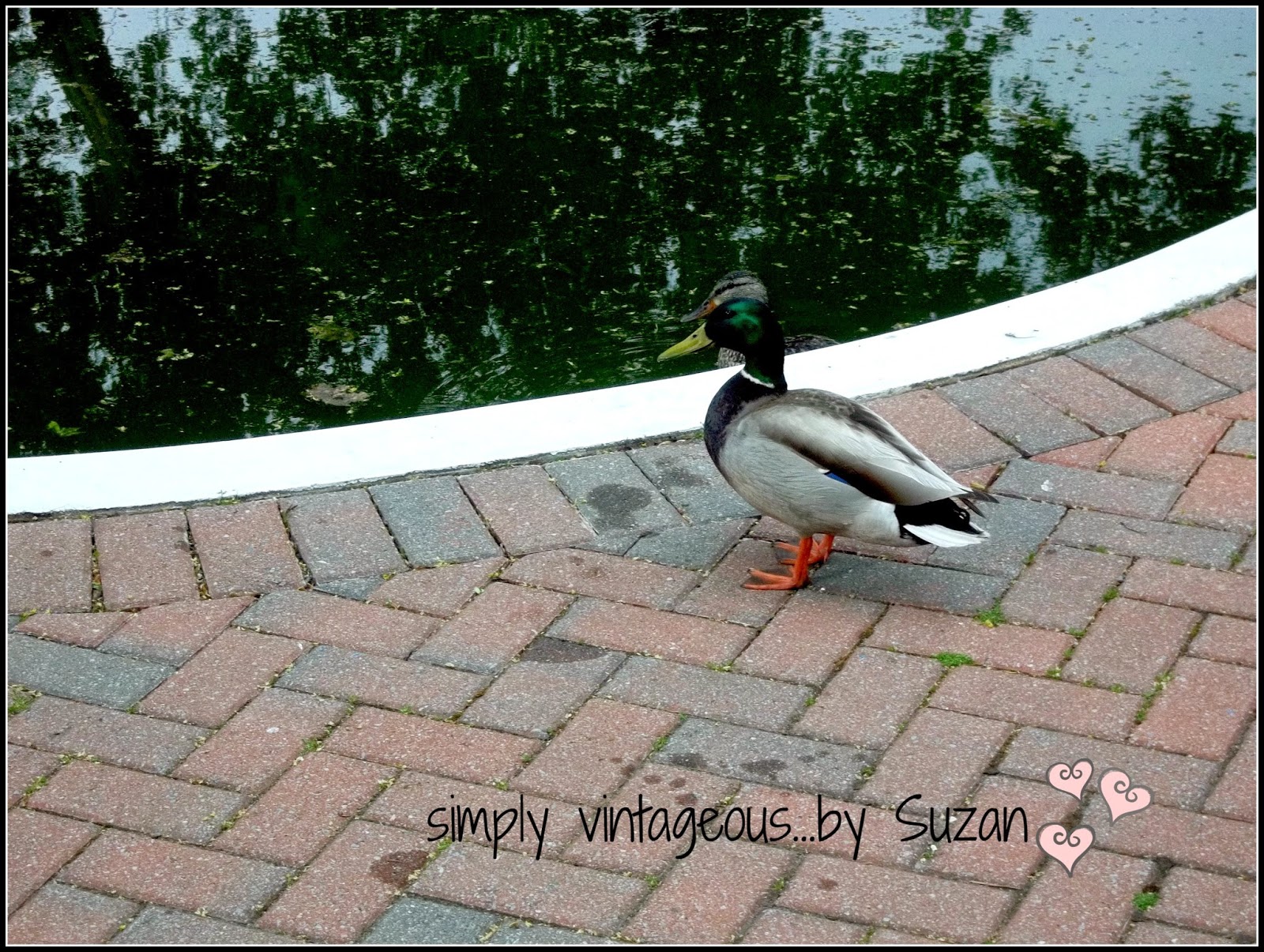 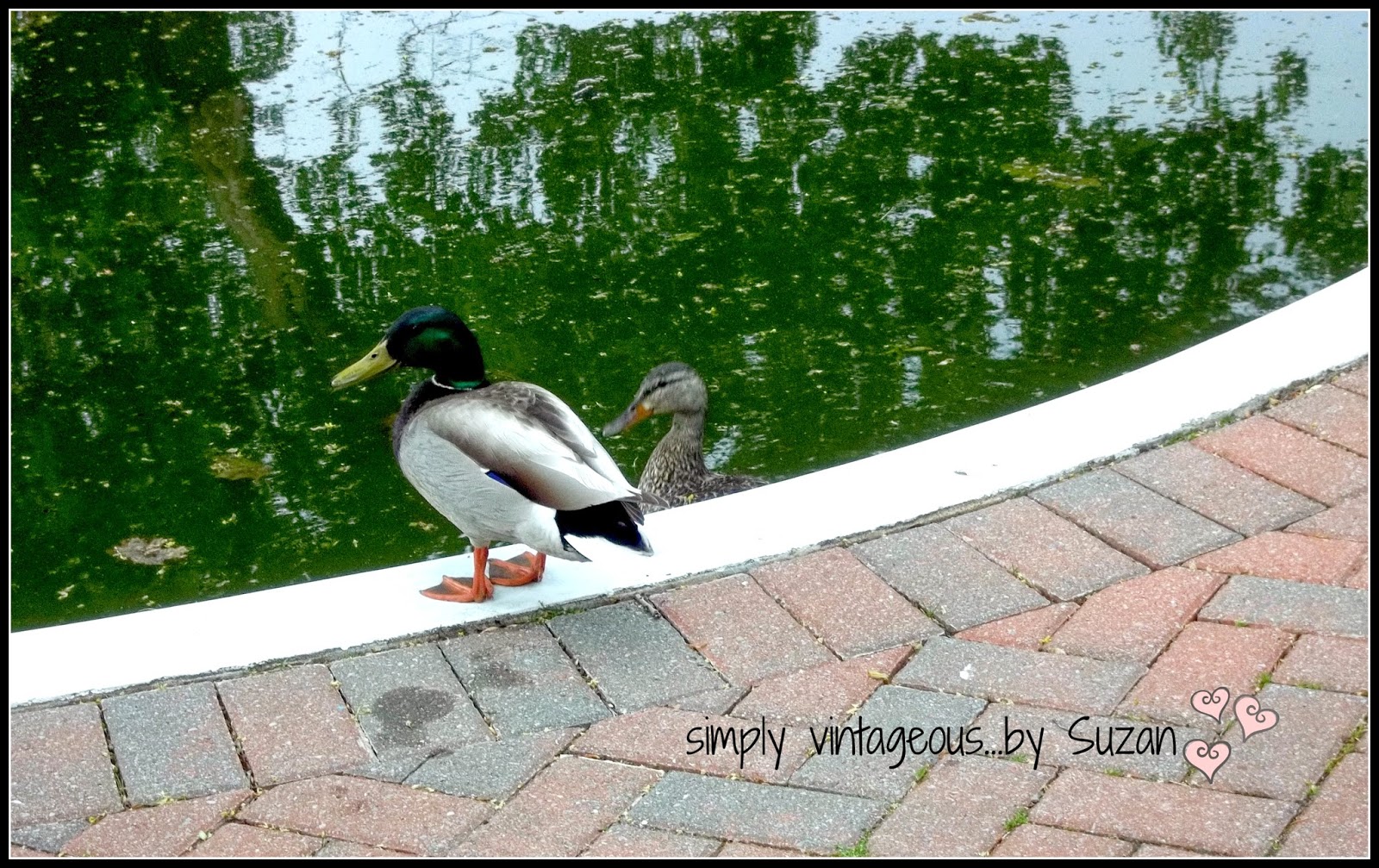 Mrs Duck says - Pay no attention to that lunatic jumping up and down banging a paint tin on the ground - she's been doing it all day and screaming for her husband............they're harmless really
Mr. Duck shrugs - and jumps in. 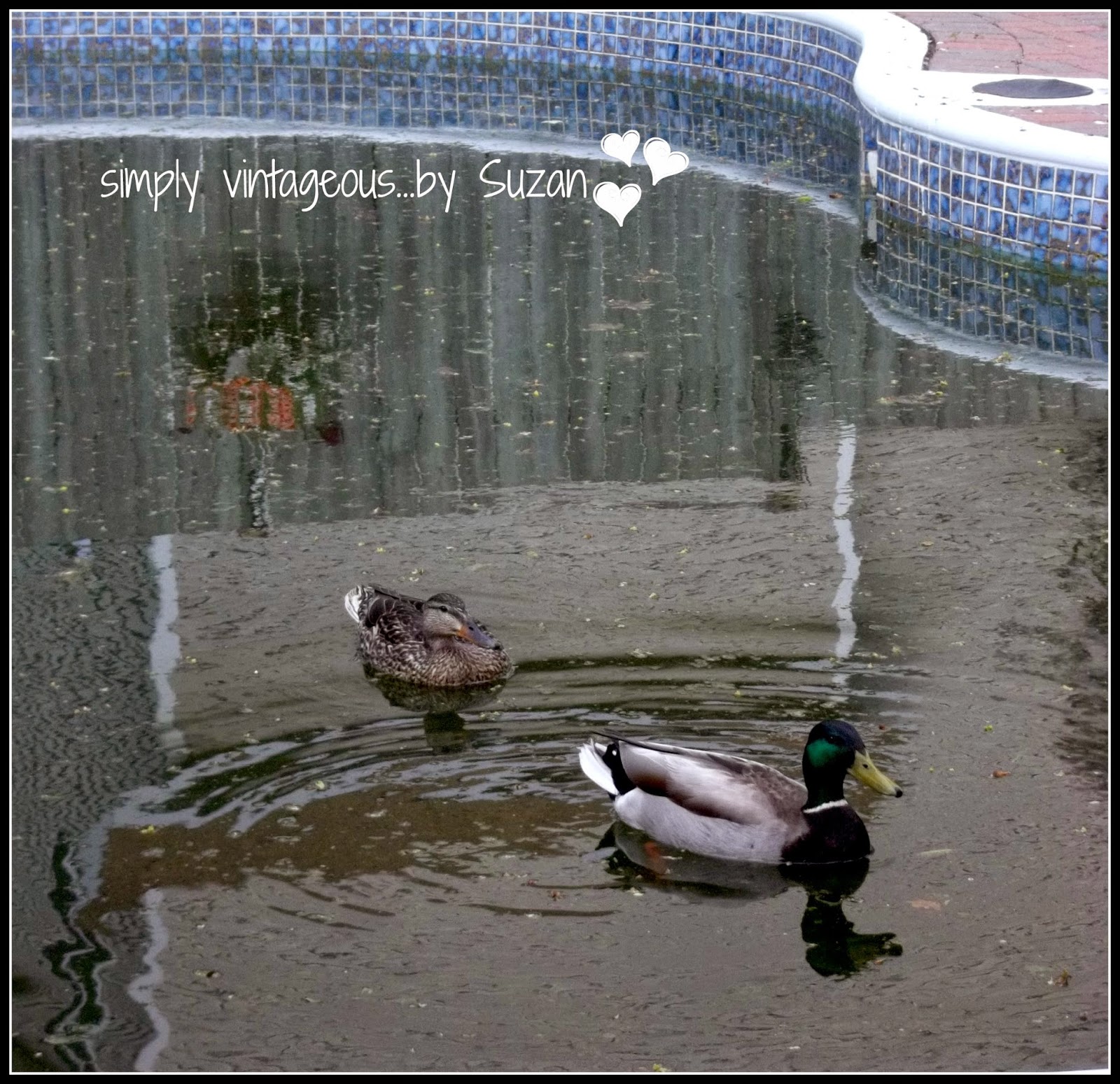 Suzan says - That's it - we're shocking the pool this weekend
John says - Oh stop already
Suzan says - What are we waiting for?  EELS to come slithering out of it?

Meanwhile Sammy the Squirrel looked quite enthralled by it all 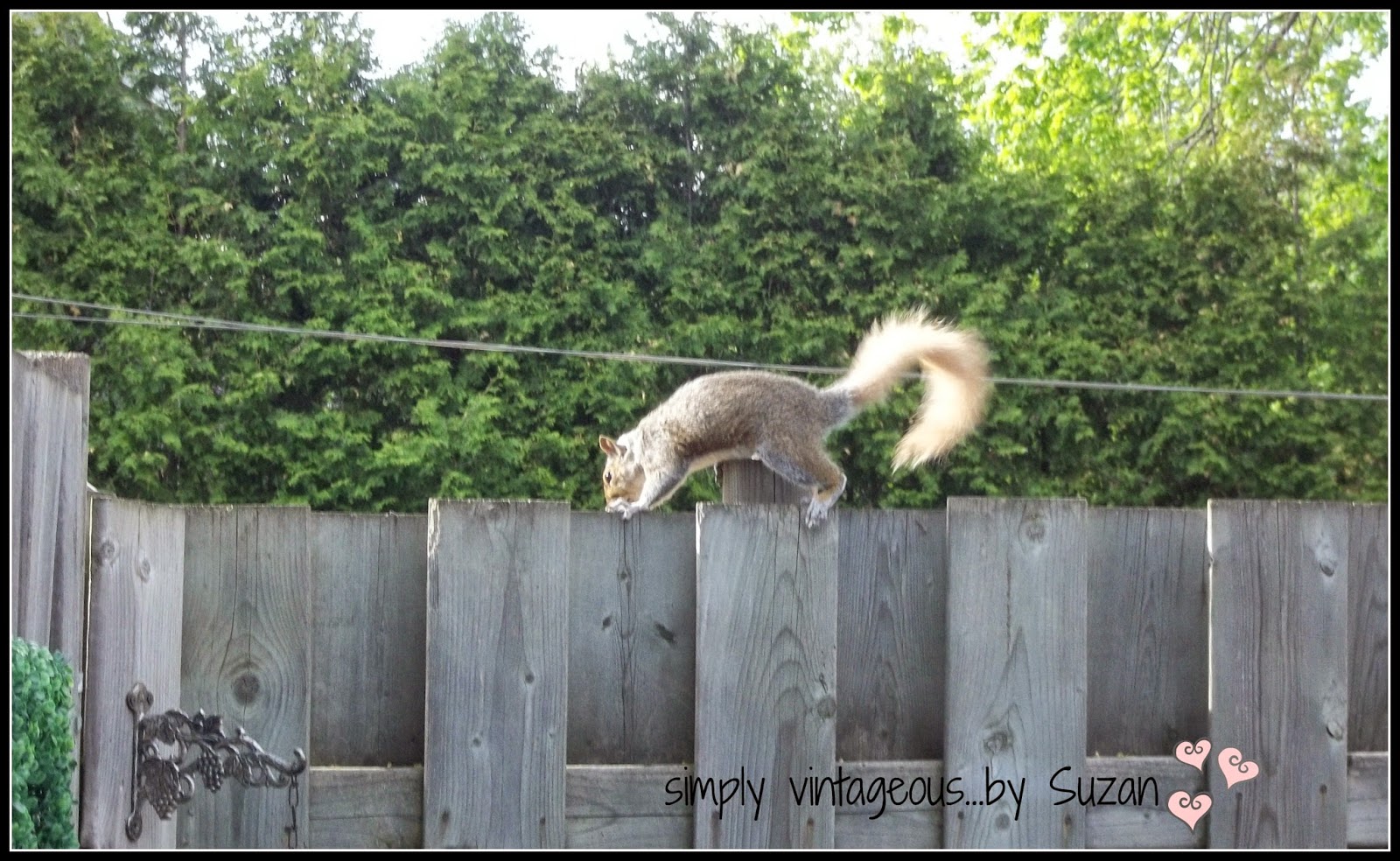 ( btw - I've named them Donald and Doris - but I thought a little respect was in order, they don't know any of you after all )

Off to buy pool cleaner stuff - and a cover -
Duck L'orange anyone?


For duck
For sauce

Roast duck:
Put oven rack in middle position and preheat oven to 475°F.
Stir together salt, coriander, cumin, and pepper. Pat duck dry and sprinkle inside and out with spice mixture. Cut 1 half of orange into quarters and put in duck cavity with thyme, marjoram, parsley, and 4 onion wedges.
Squeeze juice from remaining half of orange and stir together with wine and stock. Set aside.
Spread remaining 4 onion wedges in roasting pan with carrot and celery, then place duck on top of vegetables and roast 30 minutes.
Pour wine mixture into roasting pan and reduce oven temperature to 350°F. Continue to roast duck until thermometer inserted into a thigh (close to but not touching bone) registers 170°F, 1 to 1 1/4 hours more. Turn on broiler and broil duck 3 to 4 inches from heat until top is golden brown, about 3 minutes.
Tilt duck to drain juices from cavity into pan and transfer duck to a cutting board, reserving juices in pan. Let duck stand 15 minutes.
Make sauce:
While duck roasts, cook sugar in a dry 1-quart heavy saucepan over moderate heat, undisturbed, until it begins to melt. Continue to cook, stirring occasionally with a fork, until sugar melts into a deep golden caramel. Add orange juice, vinegar, and salt (use caution; mixture will bubble and steam vigorously) and simmer over low heat, stirring occasionally, until caramel is dissolved. Remove syrup from heat.
Discard vegetables from roasting pan and pour pan juices through a fine-mesh sieve into a 1-quart glass measure or bowl, then skim off and discard fat. Add enough stock to pan juices to total 1 cup liquid.
Stir together butter and flour to form a beurre manié. Bring pan juices to a simmer in a 1- to 2-quart heavy saucepan, then add beurre manié, whisking constantly to prevent lumps. Add orange syrup and zest and simmer, whisking occasionally, until sauce is thickened slightly and zest is tender, about 5 minutes. Serve with duck.
I think I'm going to vomit now. ( or start another blog called Decorating with Ducks ? )
Have a wonderful weekend everyone !
Hugs,

UPDATE - JUST SO YOU DON'T THINK WE KEEP THE MOST DISGUSTING POOL ON THE PLANET - HERE'S THE YARD CLEANED UP !!!! 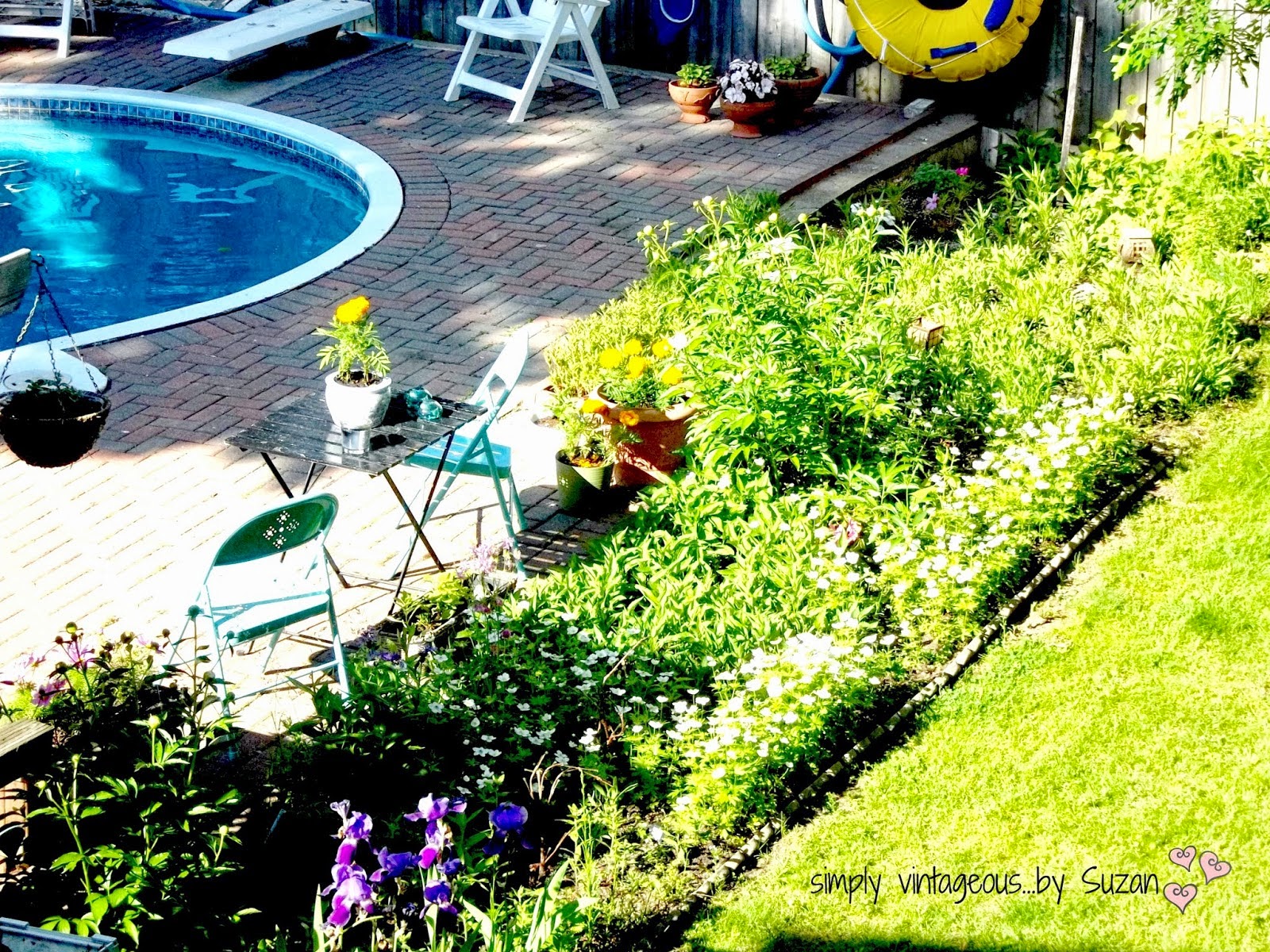