Supercalifragilisticexpialidocious.........................
You know, you can say it backwards, which is " dociousaliexpilsticfragicalirepus "
but that's going a bit too far, don't you think? "
Mary Poppins to Bert


There's an 11 year age difference between John and myself - which is nothing really I know - but add to that that he isn't from North America and sometimes the gap is literally an ocean wide.
11 years.
Nothing really.
Except when you think that:


When I was sitting in a movie theater awestruck by the magic of this movie - at 5 years old - he was sitting in a pub drinking " pints " with his buddies
When I was having my first communion - he was getting engaged
When I was watching David Cassidy and literally having heart palpitations over him at 12 years old - he was already married with his first born son
When I was going to discotheques - he was reading bed time stories to two little boys
While I was babysitting to save up enough money to go to rock concerts ( 10.00 can you imagine ) he was working to save up enough money for a downpayment on a home


He doesn't know the Brady Bunch - or Gilligan's Island - or Petticoat Junction - or I Dream of Jeannie - or Bewitched - or the Beverly Hillbillies etc while I, on the other hand can still sing the
opening ( and in some cases ) the closings of all of the above.


And although of course he knows who Rod Stewart - the Stones - Bob Dylan etc are - he still
can't sing along - he does not know the words to any of the songs that made these guys famous in the 70's - I happily belt them all out as though it still is the 70's.
( I also remember the words to Echo Valley 26809 but you have to be in your 50's to know which one that is and I'm not telling you either, lol )
And He has no idea who Bobby Goldsboro is - or April Wine - or America - or BTO - or Cheap Trik or Doctor Hook etc


He never had a Big Mac until he came here - never tasted a hotdog - didn't know what Pizza was - or smoked meat ( pastrami in the States ) and he still has never tasted KD and refuses to, period. He did not have a bar b q in his back yard.


He never did the " hustle " ( a very popular dance in the 70's ) didn't wear levi's until his 50's
Never owned a pair of cowboy boots and never smoked a joint - now I know a lot of people have never smoked a joint - but he never even knew anyone that did - and don't forget I'm
talking the 70's here - even if you didn't do it - you got high just being at parties there was so
much going on in a room.


So he simply cannot relate to my pop culture - at all.

OMG I tell him - I watched that movie at least 10 times when it came out, do you remember it?


And he sort of mumbles something under his breath.


I am absolutely incredulous at this -


Don't you know the movie John?


What's it about John?


Grease, Suzan, it's about Grease, I'm not an idiot you know.


Oh and by the way I made this sign tonight - it's my pop culture - and I'm embracing it, lol 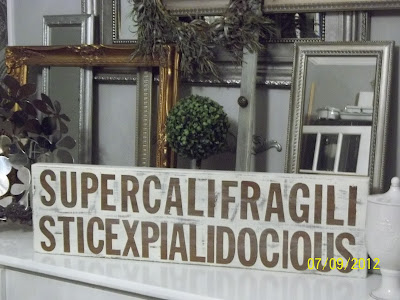 
One coat of ASCP - old white 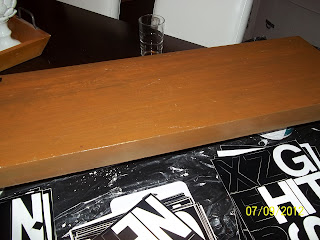