Good morning everyone!!! Today's the day ( that the teddy bears went a pickin' )

Dorothy ( my picking girlfriend ) and I decided we wanted to attempt to go to this huge Flea Market in Gatineau, Quebec - about a 90 minute drive from Montreal - so the plan was to be on the road for 7 a.m. to get there nice and early - but like all well laid plans in my life things went screwy from the moment we took off.
Picture Dorothy, John, myself and MURPHY ( as in Murphy's law ) who never wants to stay at home - lately he seems to be glued to my side creating havoc with his stupid laws constantly jumping in my face - get the hell away from me already.........................
Did I mention well laid plans?  You can't get any better then a googled map quest with very precise directions right?  Simple, easy peasy, just follow them and you get to where you want to go - they're so accurate that they tell you right down to the minute what time you will be arriving at your destination!
So accurate that we may as well leave the GPS at home because we have this paper on hand and after all it will only give us the same information that map quest gives anyway...................and we set off.
Dorothy was in charge of the map but unfortunately Murphy decided to plunk his ass right down beside her and started whispering in her ear - this is the only explanation I can come up with - because out of the blue

Dorothy says - Hey wait a minute guys - we're going in the complete wrong direction!!!
John says - I thought so - we have to go TOWARDS Ottawa - not away from it
Dorothy says - I don't understand it - but the GPS says we're 2.5 hours away from our destination
John says - I should have just stayed on the road then?
Suzan says - I think we should follow the google map quest
Murphy smirks

Dorothy says - the GPS says we have to get on a ferry
John says - A ferry?
Suzan says - what the hell is going on here?  we've left the province entirely and we now have to cross a body of water?
Dorothy says - I'm terrified of ferry's
John says - Well I suppose we have no choice
Suzan says - Look - I'm ready to swim across at this point -
Murphy smirks

Dorothy says - Oh maybe we should have turned right
John says - Yeah I think so - why the hell aren't there any signs saying where the bloody flea market is?
Suzan says - STOP THE CAR - THERE'S A GARAGE - I'M GOING TO GET DIRECTIONS
Murphy smirks

and Dorothy got a couple of small tables -

I ended up with a couple of more goodies

Oh - and at our last stop we were trying to figure out how to get one last piece in an already filled to the capacity vehicle - when I realized what had to be done.
I grabbed Murphy by the lapels and threw him off to the side of the highway - kicked him in the ass too, for good measure - we were then able to squeeze the last piece in.
And without him in the van we made it back home without any further incidents..................

As we arrived home

Suzan says - Well you know what?  I had a great day

P.S. I promptly turned that vintage wrought iron table base into this ( with a round marble slab I've had for ages - and some ASCP pure white which I basically just dabbed all over ) 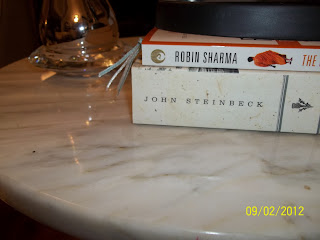