Dorothy and I ( my picker friend ) have been brainstorming for the last few weeks - which may or may not be a good thing lol, tossing ideas out there and seeing where they land - and the conclusion we have come to is this.
1) Always always always befriend your competition lol
2) IT'S TIME WE JOIN FORCES AND OPEN UP A FURNITURE " HOW TO " SCHOOL!!!!
It's still in the planning phases - but it's an exciting phase to say the least.
I don't give things a lot of thought - I'm one to jump right into everything - leave the " thinking " part to someone else...................my mind is racing with the possibilities - with the fun of it all - with the actual opportunity to TEACH people how to restore furniture - how to open their eyes to transforming pieces in their own home instead of putting them at the curbside when they can no longer stand the sight of them! 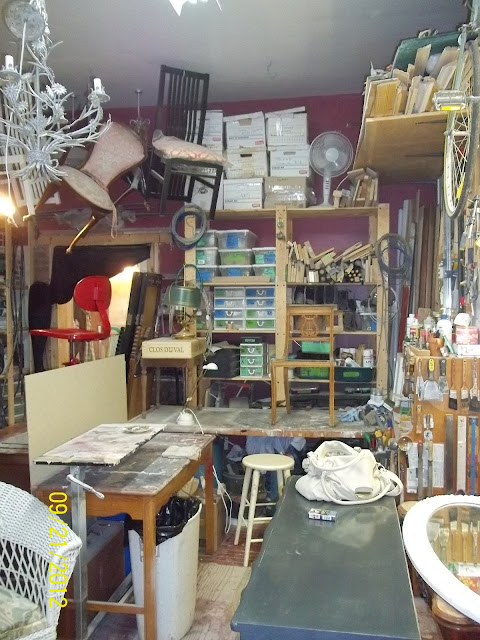 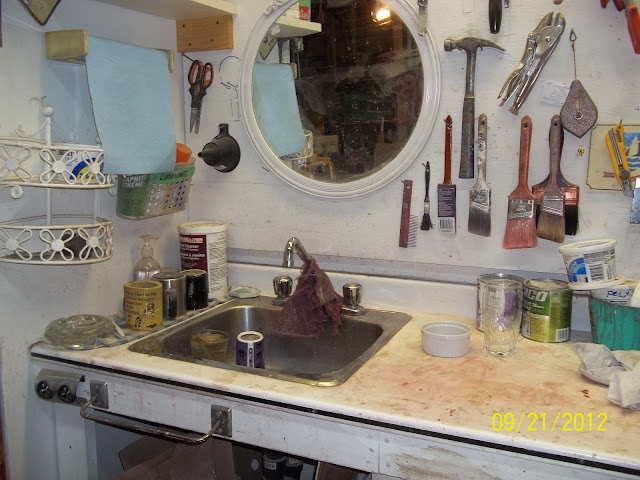 It even has a sink and counter for cleaning up after class,  perfection!!!

So tonight John and I went over for pizza and wine - and a " talk " on how we can make this all happen - and me being who I am, decided we would let the guys talk business while Dorothy and I talked practicals downstairs in this unit - 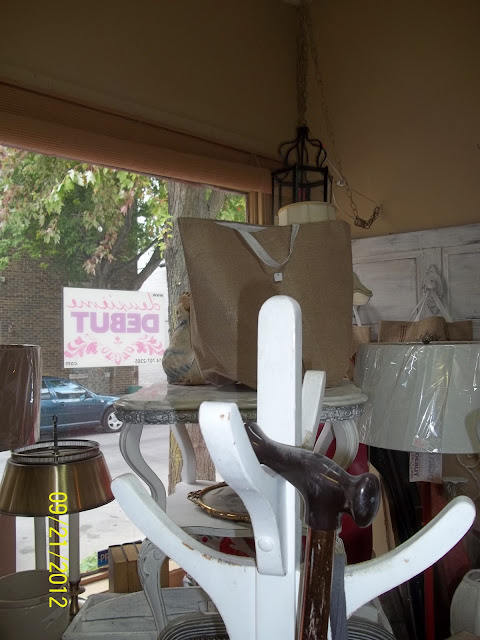 If you look behind that coat tree - you can make out a small 2 tiered table - just to the right side of the lamp?
Small table right?  I move things 5 times that size on my own - so surely between the 2 of us we can lift that up and just move it to the back of the studio?

And this is where the " thinking " process can really come in handy - this is where just jumping in to things can be really really dangerous -
I managed to squeeze myself into that space - and while Dorothy grabbed one end - I grabbed the other, lifted................and promptly fell to my knees with a pain that shot through my body like someone had stabbed me in the back.

Now keep in mind everyone, I am, without a doubt, the biggest Drama Queen out there -
I don't laugh - I shriek
I don't cry - I howl
I don't get nervous - I get terrorized
I dance like a crazy woman - I sing like I think I'm on a stage - and when I have pain that brings me to my knees, I most definitely scream

In walk John and David

In the meantime - as I just posted the photo above of that ^%$%@ table - did you notice something just a little ironic?
Here, let's look closely at it again, shall we?

THERE'S A CANE HANGING FROM THE COAT TREE, LOL

I practically crawled up the stairs - when this was hanging up right beside us the whole time?????

And this is what I learned tonight