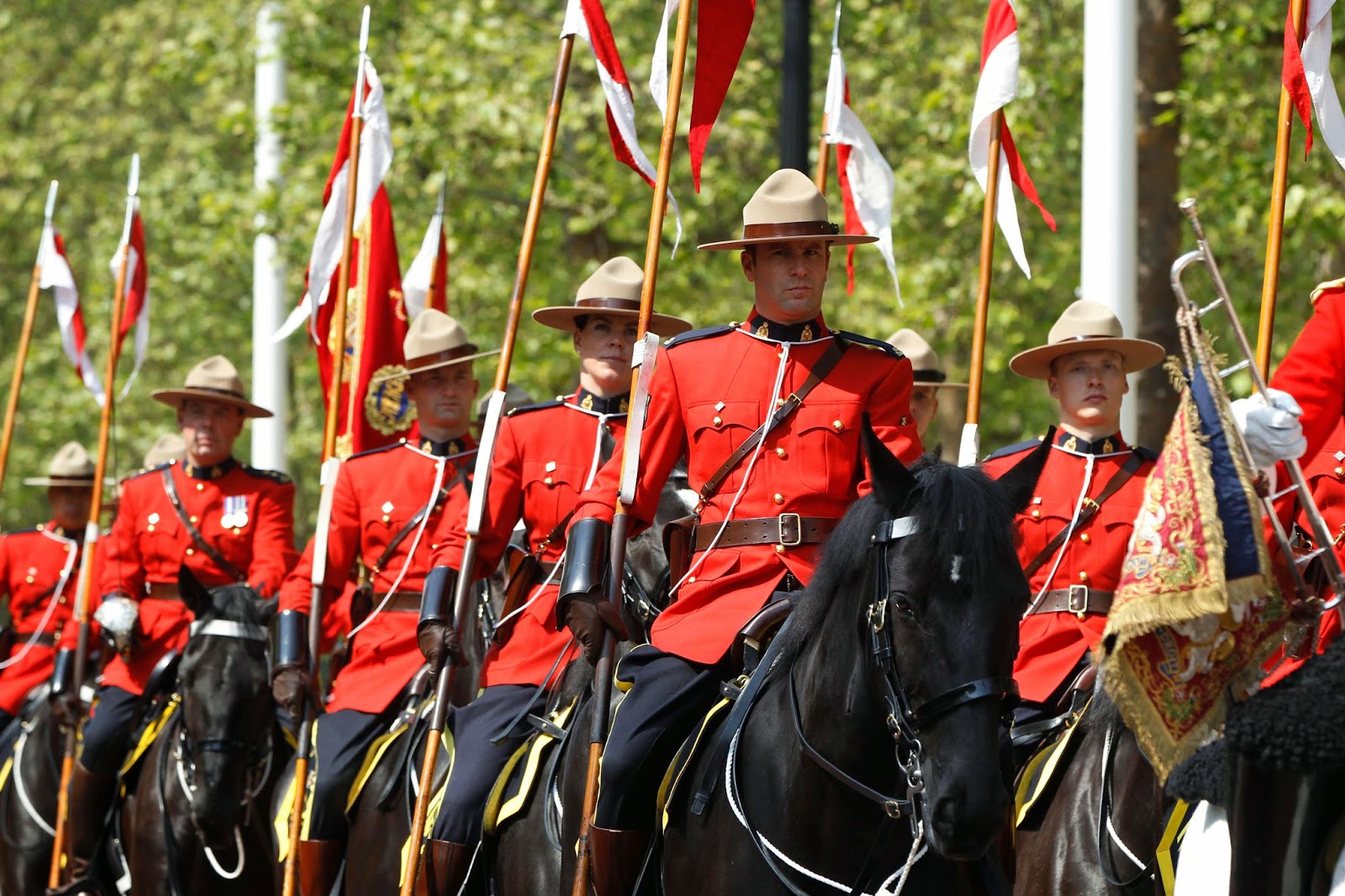 Tourists snap photos of themselves beside them because, well, they're so Canadian -

But they're more than a tourists snapshot

The RCMP are famous for their distinctive dress uniform, or "Review Order," popularly known as the "Red Serge." It consists of: high collared scarlet tunic, midnight blue breeches with yellow leg strip, Sam Browne belt with white sidearm lanyard, oxblood riding boots (possibly with spurs), brown felt campaign hat (wide, flat brimmed) with the characteristic "Montana crease", and brown gloves (with brown leather gauntlets for riders). Review Order is worn by the mounted troop performing the Musical Ride, an equestrian drill in which mounted members demonstrate their riding skills and handling of the cavalry lance. On normal duties, the RCMP uses standard police methods, equipment, and uniforms. Horses are still used for such ceremonial operations as escorting the Governor General's open landau to the Opening of Parliament.
The Red Serge tunic that identified initially the NWMP, and later the RNWMP and RCMP, is of the standard British military pattern (based on the civilian Norfolk jacket[24]). The NWMP was originally kitted out from militia stores, resulting initially in several different styles of tunic, although the style later became standardized. This style was used both to emphasize the British nature of the force and to differentiate it from the blue American military uniforms. The dark blue shoulder straps and collars were added in 1904[25] when King Edward VII granted the Force "Royal" status for its service in the Second Boer War, replacing the scarlet facings of the earlier uniform. Currently, RCMP personnel under the rank of inspector wear blue "gorget" patches on the collar, while officers from inspector to commissioner have solid blue collars, along with blue pointed-sleeve cuffs.
On top of this jacket was worn a white haversack and white gauntlets,[24] which provided a high visible contrast to the red tunic, but were easily dirtied. In the modern dress uniform these have been replaced with brown leather riding gloves and carrying pouches added to the belt.
wikipedia

They're known for their attire

But they're more than a red uniform


They are part of Canada's Finest and normally look like this

As the national police force of Canada, the Royal Canadian Mounted Police is primarily responsible for enforcing federal laws throughout Canada.

The Royal Canadian Mounted Police were accorded the status of a regiment of Dragoons in 1921, with its first guidon presented in 1935.[34][35] As a cavalry regiment, the RCMP was entitled to wear battle honours for its war service as well as carry a guidon. The RCMP mounted the King's Life Guard at Horse Guards Parade in 1937 leading up to the coronation of King George VI.
Wikipedia

But they're more than mounted police

In New Brunswick ( here in Canada )


On Wednesday, shocking images of a camouflage-clad Bourque walking calmly on a residential street, armed with high-powered firearms, spread across the Internet and gained international media attention.
It remains unclear how the suspect acquired the weapons – described as an M-14 semi-automatic rifle and a six-shot pump-action shotgun.
Online speculation over where Bourque bought his arsenal prompted a Moncton-area "emergency preparedness" store to issue a statement, to clear themselves of culpability from what is described as one of the worst mass shooting in RCMP history.
"The Worlds End Warehouse is a fully authorised & licensed firearms dealer, with a spotless record, and we promote firearms for recreational hunting, target shooting and law enforcement/security. However, to prevent pointless media speculation we can confirm that the suspect in this case whilst known personally by employees of our store, was never a customer and never purchased firearms or ammunition from us," they said.
The manhunt, which lasted nearly 30 hours, included the efforts of tactical armoured vehicles, air support major crime units, specialized teams, K-9 teams, and a legion of on-duty officers from across the province.
A few character witnesses also emerged during the nerve-wracking ordeal, sharing details about the former Walmart Canada employee's personal life.
According to Christian Duquette, a neighbour living in the same trailer park asBourque, described the man as someone who preferred to keep to himself.
"He was a loner, he was never out in the park socializing. Aside from that, he was just your average Joe in a trailer park."
With files from The Canadian Press

But they're more than police officers

They're Daddies who play ball with their kids, they're piggy backs,  little league hockey coaches and somewhere safe to run to
They're Mommies who tuck children into bed at night - who kiss away boo - boo's - who teach and nurture and comfort.
They're Sons who visit families on weekends
They're Daughters who help care for parents
They're Sisters and Brothers with a life long memory of shared upbringings
They're Nanas and Grandpas and cousins and nieces and nephews
They're friends who belong to closely knit circles.
And though they're an important - very important - intricate part of the spokes on a wheel that keep a Country turning - it's the smaller circle they belong to that is most affected when one of them " falls "
Please keep them in your prayers.
The ones who wait to hear a key turning in the front door at the end of a long shift -
for normalcy to return-for the phone to ring and a voice saying " hey, I'm safe, don't worry "
for a little " reprieve " in the anxiety - to hear the words " I'm home " before they can close their eyes and go to sleep.
The ones who wait to heave a sigh of relief.
The ones whose worst fear have been realized.
For they have also given the ultimate sacrifice.

But they're so much more than a ribbon for bravery 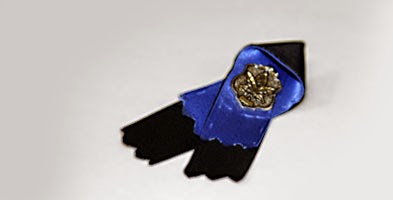 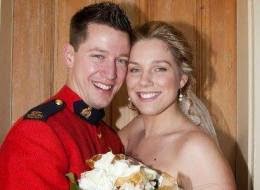 heroes, one and all

With utmost gratitude and respect for your service.