I thought about it while I stuffed my face with chocolate -
and wondered if perhaps that should be my resolution
No chocolate for a year?
But then one night - just after Christmas - I went to take a turtle out of my hidden stash - and
the box was empty - John had discovered where I hid it
Let me just tell you this.
My reaction was such that I knew from the bottom of my being that if I even attempted to give up chocolate
I would be living alone by January 15.........................
I'd give up my life for him -
Chocolate?
Not happening.
And I'm menopausing so I can't give it up anyway.

I thought about it while attempting to do a sit up one night by the fire
One sit up.
And realized I couldn't get up off the floor - and it was so cozy down there with the fire blazing away,
that I just laid there and tried to come up with another plan......................
And I'm menopausing so I can't do sit-ups anyway.

I thought about it while making supper one night -
Hmmm - maybe this should be the year that we seriously focus on eating healthier.
But I really wanted fries - and I really wanted them made in hot bubbling oil - not shrivelling
up on a baking sheet in the oven like a batch of cardboard sticks.  I hate cardboard sticks.
So that idea was axed.
And I'm menopausing so I can't give up fries anyway

I thought about ( while laying in bed ) making it a point to get dressed every single day this year.
Instead of spending half my life in sweats or p.j's sitting in front of my computer, blogging, but
realized this would almost be impossible for me - setting my sights far too high - so I rolled over
and had a nap instead.
And I'm menopausing so I can't get dressed everyday anyway

I thought about taking over the chore of walking Soda - at least once a day - instead of John doing it
every single time in the last year or so - but it was so cold on the day I thought about it - that I shut it out of my brain completely.
Because I know - I just know- that if it were left to me - I'd spend my life on my hands and knees washing up accidents. And I have a bad knee.
And I'm menopausing so I can't walk Soda everyday anyway.

I thought about trying to make a balanced budget - but this sent me into such a downward spiral of depression that I ripped the paper in a thousand pieces and walked out of the office - and laid down on the floor in the living room in front of the blazing fire and tried to do a sit up.
And I'm menopausing - so me and  " balanced " do not work together anyway

I even thought about the idea of maybe letting John " be " this year - instead of tormenting him daily - but then realized if I did that - that would be the end of my blog - and I am most definitely NOT giving up my blog.  At this point it's the last thin line between me and my sanity.
And I'm menopausing - so I can't NOT torment John anyway - ( or I'd self combust )

AND THEN IT HIT ME
I know exactly what I'm giving up.

Menopause.
Since it's the one common factor that's keeping me from being able to make any New Year's Resolutions in the first place.
That's right
I'm giving it up - I'm walking away from it -
I'm saying goodbye to the sweating profusely ( good-bye - sayonara - you beads of degradation )
and adios to insomnia -  (well hello -you beautiful dream filled nights )
I'm going to shake off those headaches - and shimmy out of the " bulge " that just seems to get a little bit bigger each month,
And the mood swings?
They're history - I'm shutting the door on them - you hear that, mood swings?  Don't let the door hit you on your way out, ya hear me?
I've sat down and had a good talk with my hormones - they seem to understand God Bless them - that they can't - absolutely cannot - run havoc all over the place anymore - if they can't behave - they're outta here too.  I'm giving them a chance though because they get confused so easily.
And while I was at it I had a little conversation with my bladder - I detest weakness - and refuse to have it behaving the way it does whenever I need to laugh - really laugh - My God Girl - I told it - toughen up!
You're better than this - you're bigger then this - have some pride - yadda yadda - in it's defence it did seem a little embarrassed - we'll see if it worked - but if not - that's out the door too!
I was a little gentler with my heart - it's soooo sensitive - so I softly explained that it can't keep breaking everytime I read a card,  or remember certain things - or watch a movie - it just can't - like the bladder it just has to toughen up -  and although I didn't actually say the words to it - it's GONE if it can't comply.
And my bowels?  Let's just say they've been warned - they have to learn a little patience - I explained to them that the world doesn't stop just because they're demanding some attention. I let them know that if we're going out for a walk - they can't, out of the blue, insist that I look for the closest restaurant that I can run into.
My God it's not all about you, I admonished them. You can't be stamping your feet in a temper tantrum
with " But I want to go now - " and carrying on like a child.  It's simply not necessary to explore every public washroom in the city...........
The chin hairs better make themselves scarce too if they know what's good for them.
Tough Love?  I hear it works..................

So this is the year folks.
This is my New Years RE SOLUTION.
I'm quitting menopause.
It's a sacrifce, I know, because I'm walking away from a perfectly built in excuse for being a b**ch and I just may be a walking skeleton by June or July without any important organs existing inside of me other than intestines....................
But I WILL BE MENOPAUSE FREE
Trust me on that one.
AND once I'm menopause free - it'll be soooo easy to come up with a New Years Resolution next year -
Hell, I may be able to attempt 2 or 3 of them! 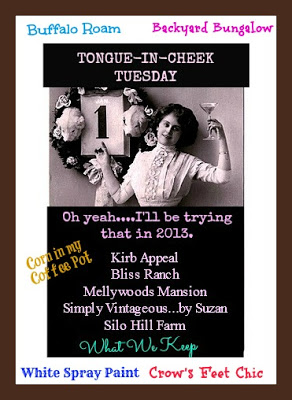