In the midst of hundreds of boxes surrounding me at this point - calls to all the services to have everything transferred - countless calls to moving companies - notary appointments to set up - the only thing I feel like doing is dancing.................

Last night I blasted some old c.d's and started twirling around the dining room while packing -

John shakes his head -
John says - It's like living with a Schizophrenic
John says - one minute you're throwing plates into the wall and the next thing you're doing a bootie something or other  ( my plate episode can be found here. )
Suzan says- it's the BOOT SCOOTIN' BOOGIE - and I used to be the Queen of that dance.............. 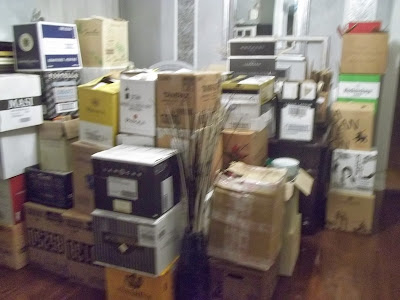 (/ˌskɪtsɵˈfrɛniə/ or /ˌskɪtsɵˈfriːniə/) is a mental disorder characterized by problems with thought processes and by poor emotional responses.[1] Common symptoms are delusions including paranoia and auditory hallucinations, disorganized thinking reflected in speech, and a lack of emotional intelligence. It is accompanied by significant social or vocational dysfunction.

Have a wonderful Tuesday everyone