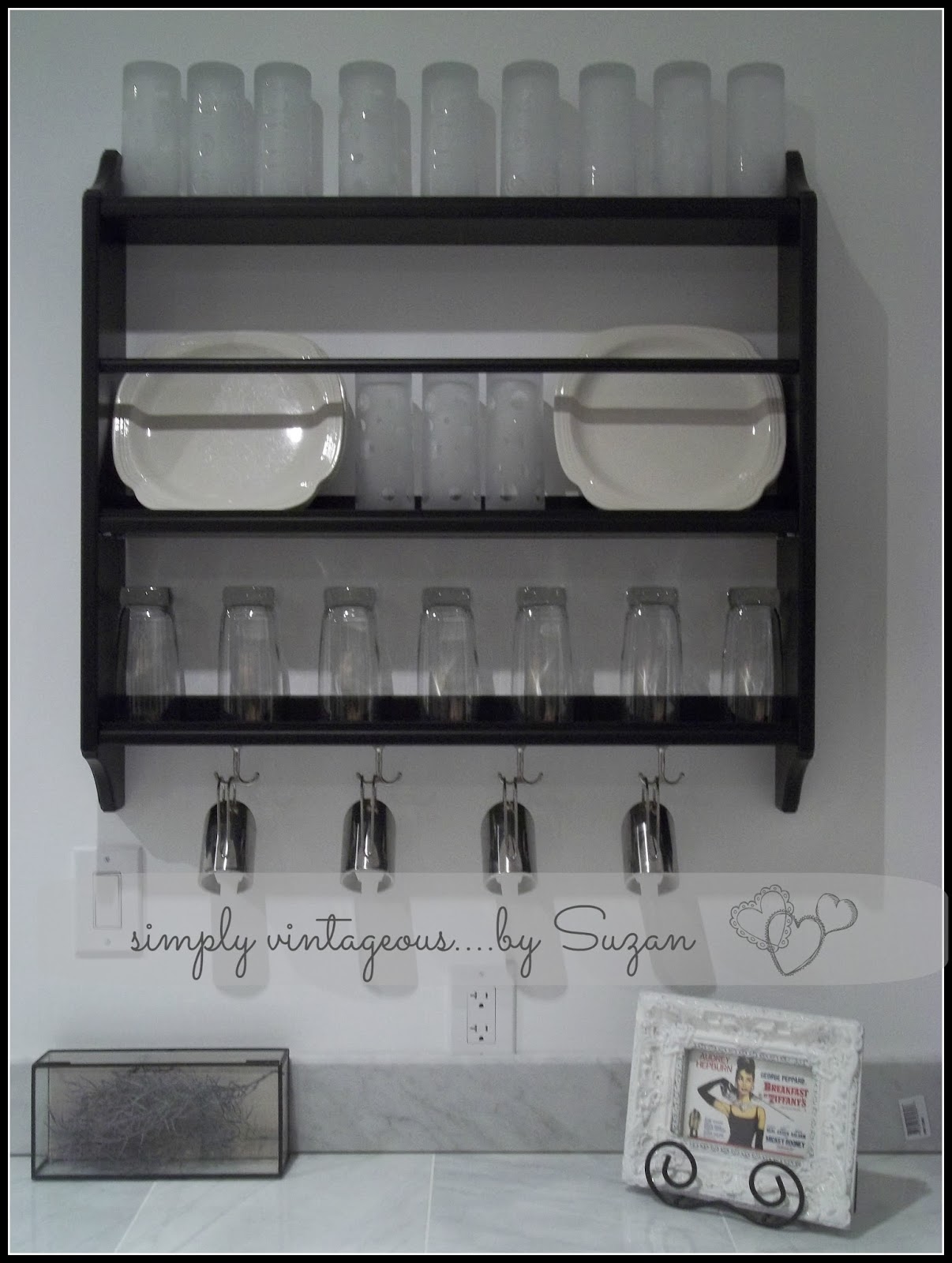 What do you think of them?  Did I do good?  You have to tell me - because I've been beating myself up for 2 days over the floor fiasco..................
They really are a great storage alternative for those of us that don't want upper cabinets :)
They accommodate a LOT considering they don't take up much space at all -
I especially love that there's hooks on the bottom!

I'm happy I decided to keep the old sink ( don't know why it wasn't thrown out during the demo process - divine intervention perhaps )  Originally - when I was going to go with a marble slab the sink would have been an under mount - however this one works perfectly with the tiles - it doesn't look it but the tubs are very deep - and there's 2 of them - and it cleaned up rather nicely - nothing to write home about - but in the end it'll do fine. 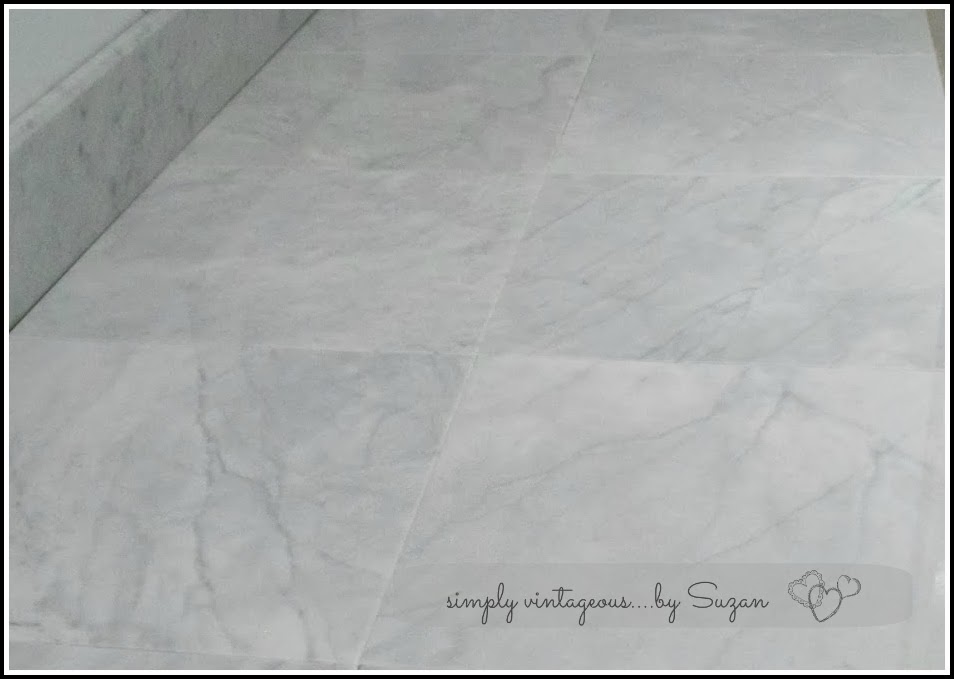 I'm happy I decided to get the 2 galvanized steel units from IKEA - at 15.99 each - to rest on either side of the stove - I only have one up so far but like the industrial look it gives the area ( keeping in mind that a large stainless steel hood will be in the center of both 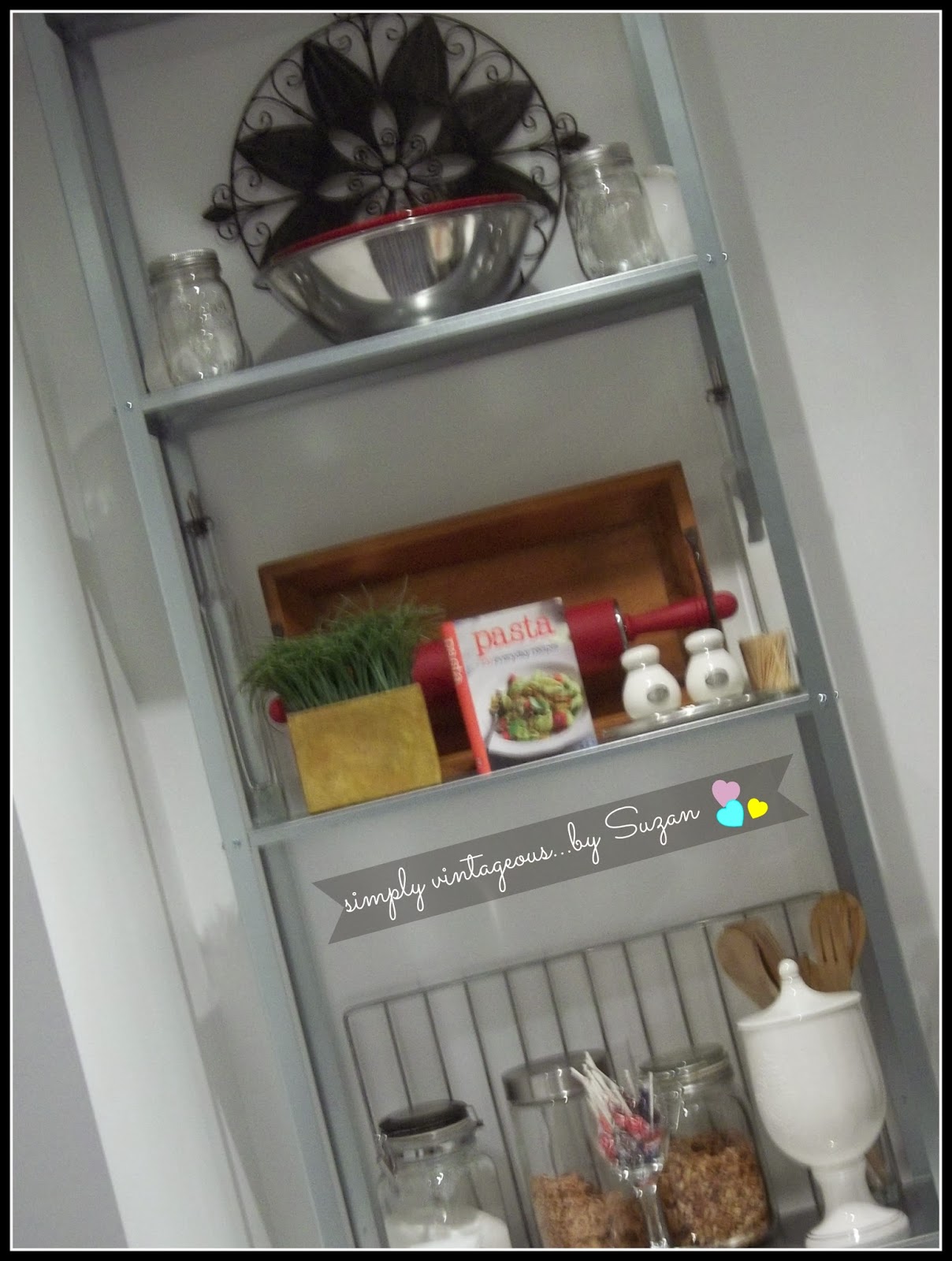 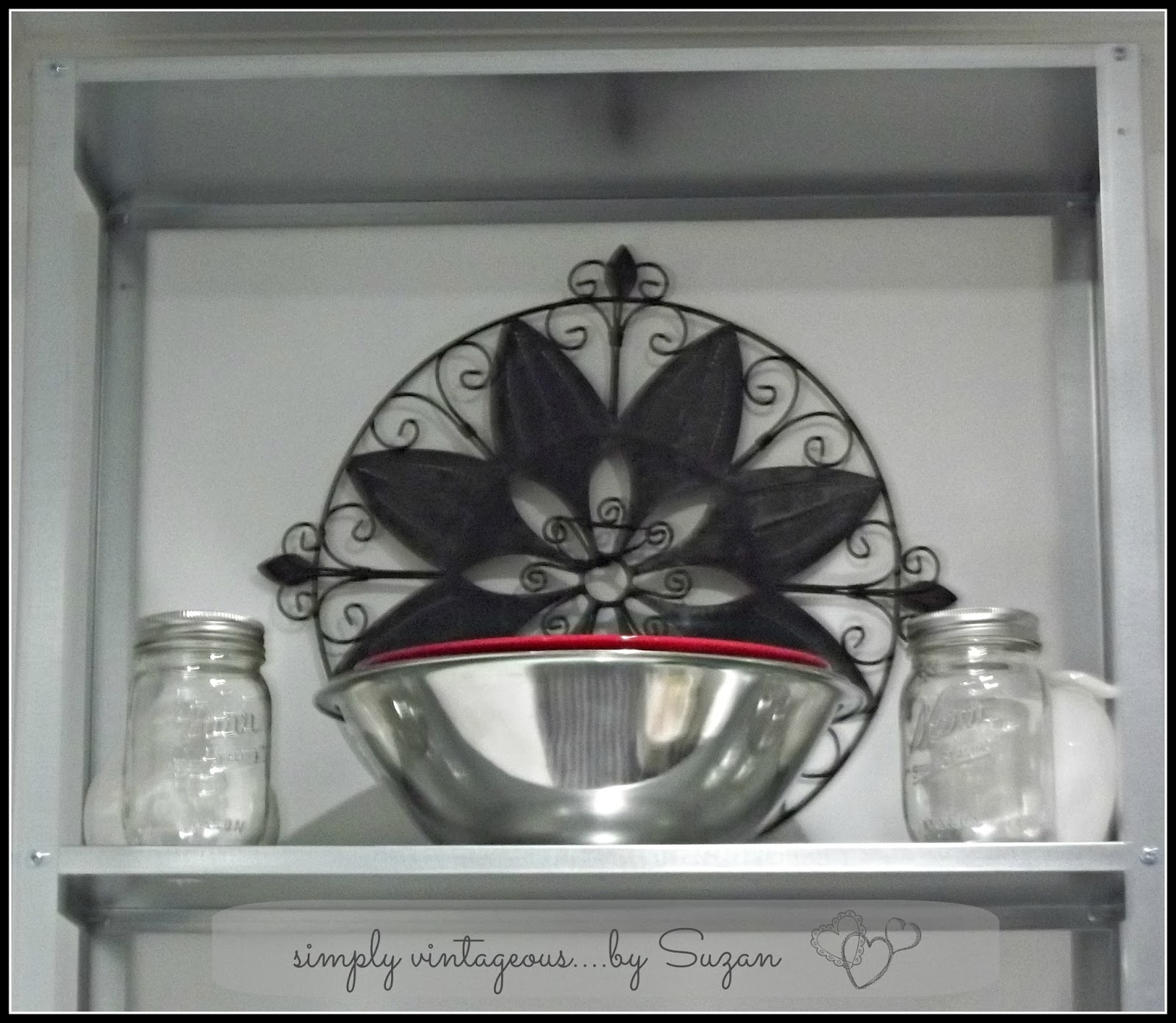 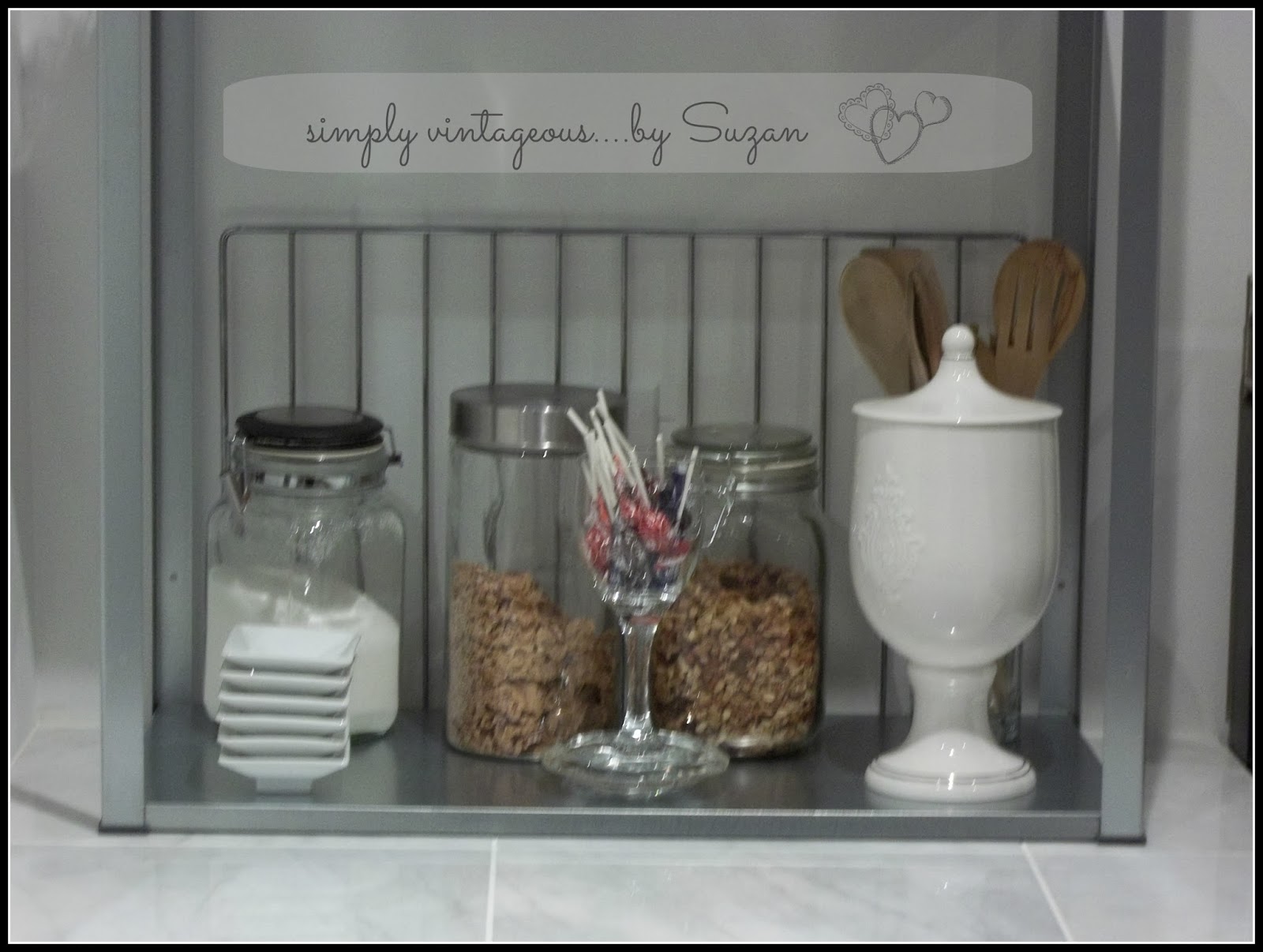 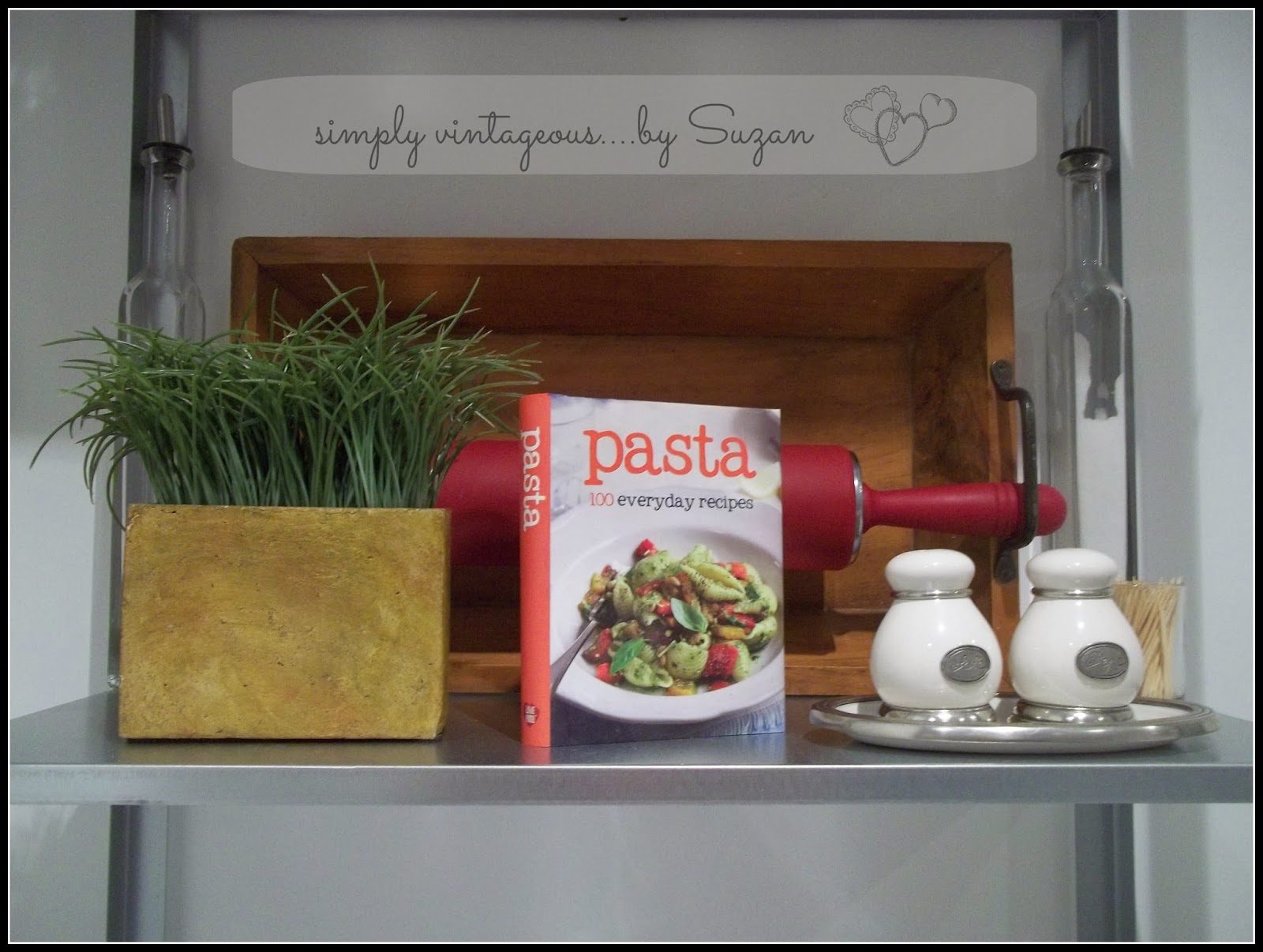 and I'm really liking the microwave niche too since it creates more counter space.
( why is the light red on it?  I've never seen that before - don't like ) 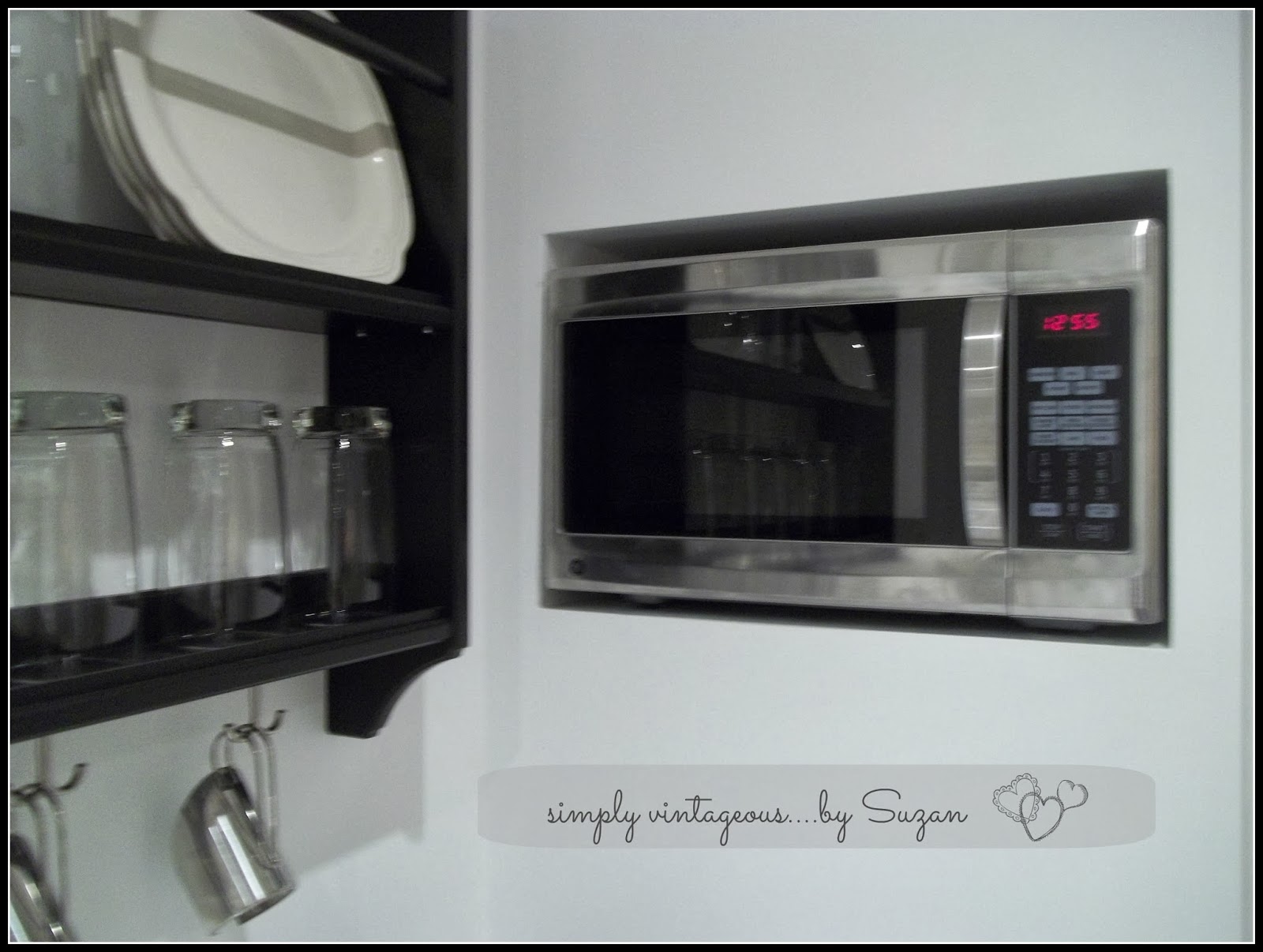 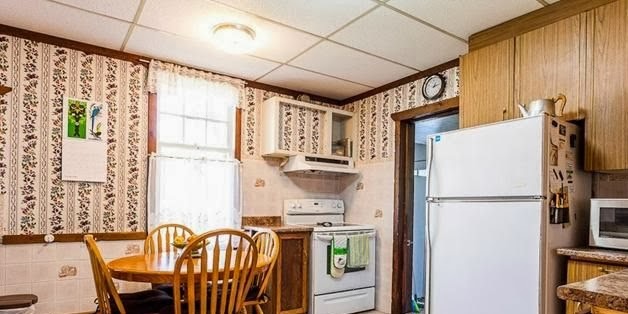 I'm thrilled with every decision so far 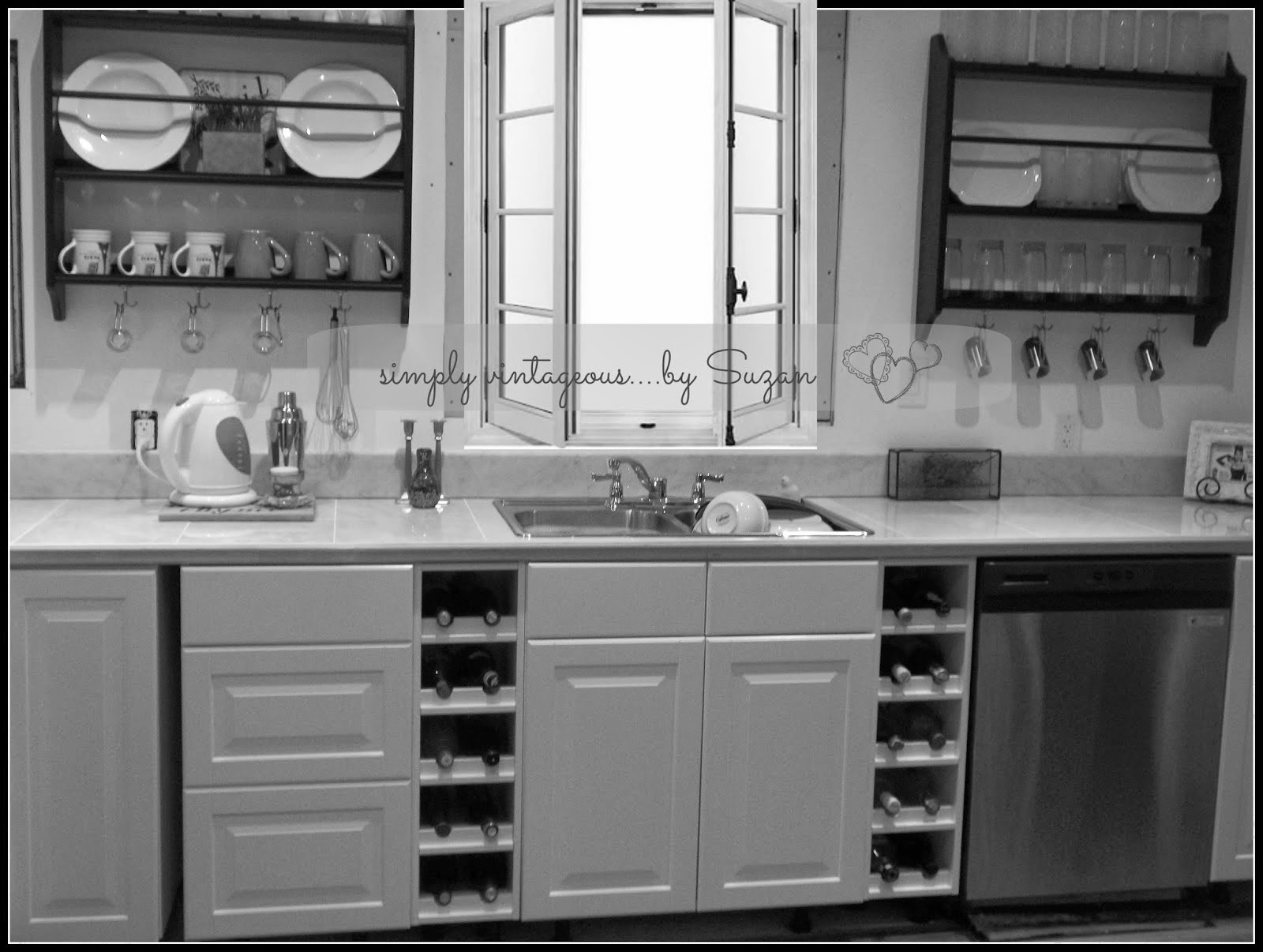 ( I used my incredible photography skills - and ran to PICMONKEY to photo shop the window we've ordered - so you can see what'll it look like LMHO )  remember the window will be black - but this is the one.  I think it's ready in 2 weeks.
That gap between the drawers and the cabinet on the left had side still has to have the filler piece installed to hide it. And I hate that the right hand plate rack looks crooked - it isn't !!!
Oh and I still have to paint out that wood trim along the perimeter of the tile.

Remember the black and white tile floor I wanted? 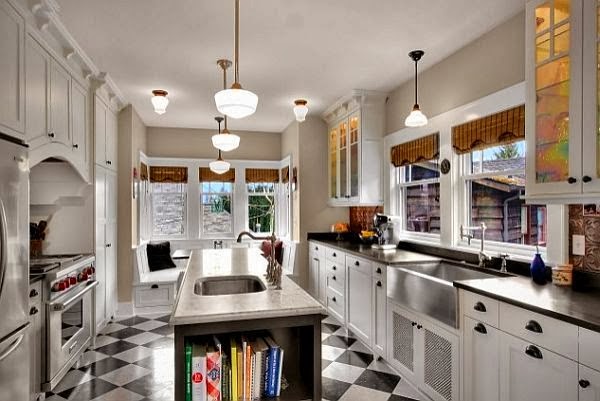 It didn't look so bad when we saw the one piece. 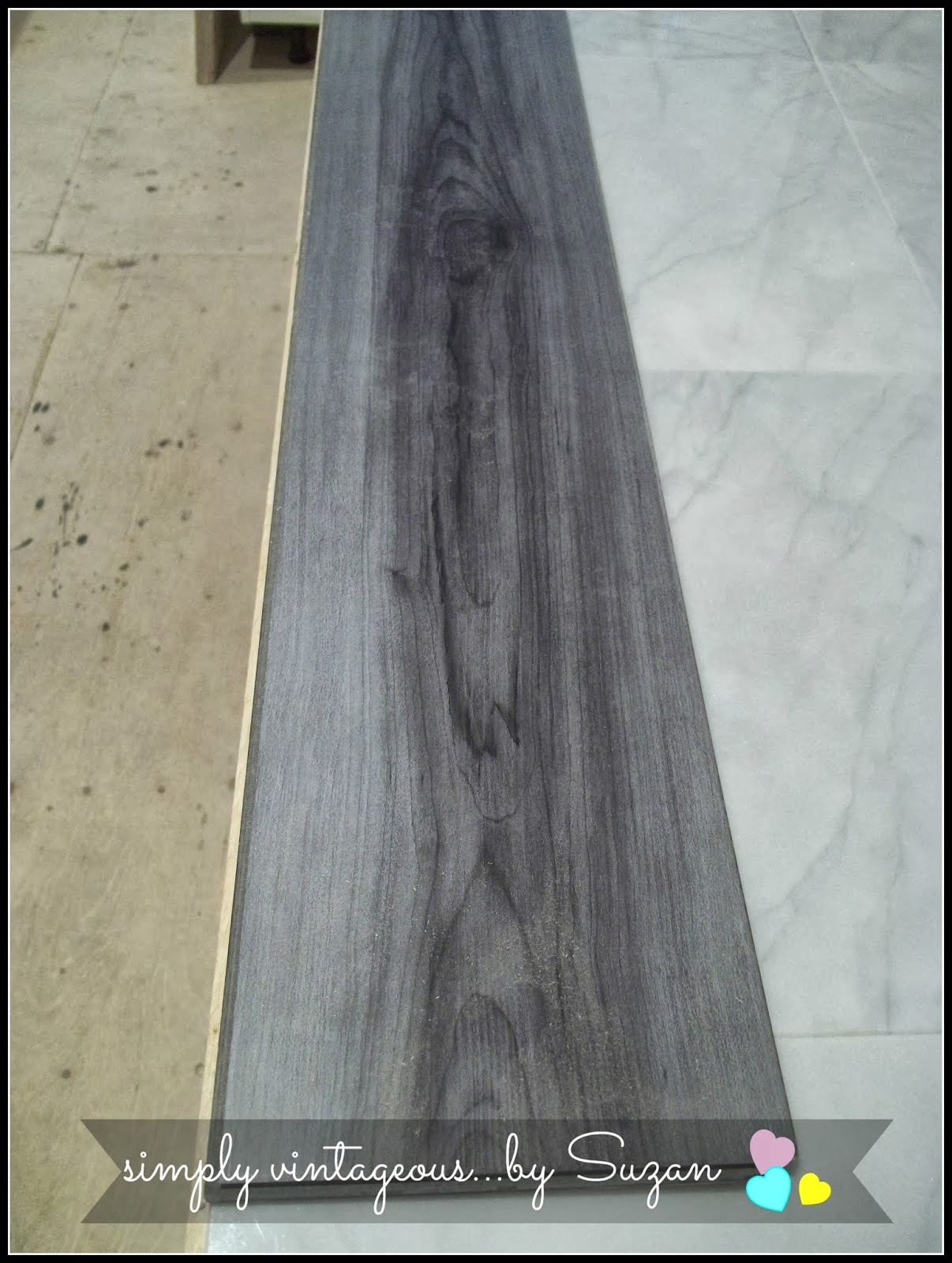 AND I CAN'T EVEN SHOW YOU THE PHOTO WITHOUT TELLING YOU FIRST THAT IT'S COMING OFF THIS WEEK - WE'RE GETTING BLACK AND WHITE CERAMIC TILES - FORGET THE STICK ON ONES JUST TO SEE IF I'LL LIKE IT - BECAUSE NOW ANYTHING WILL BE BETTER THAN THIS - I'D RATHER JUST LOOK AT THE PLYWOOD, SERIOUSLY. 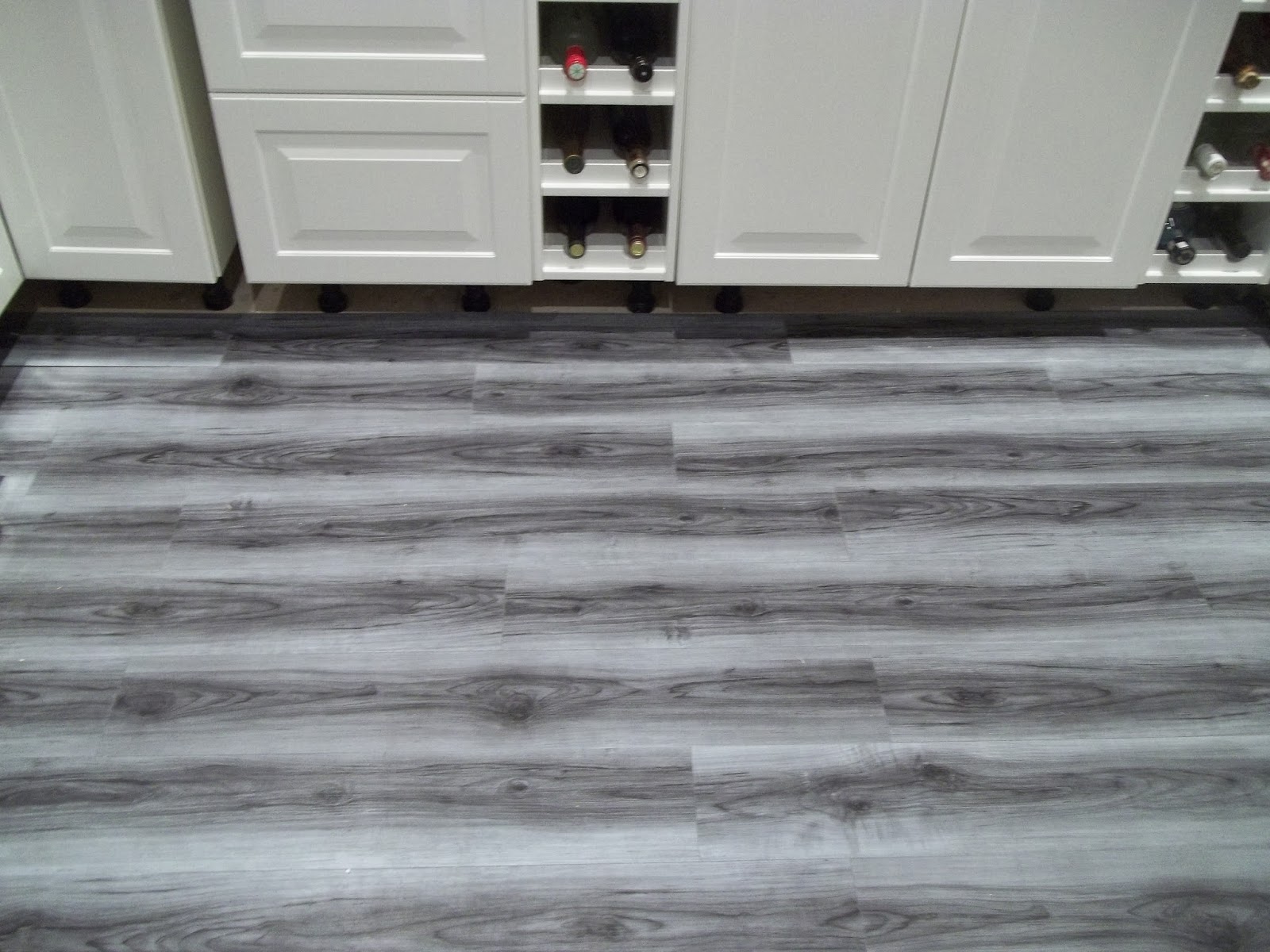 And because I can't leave you with that image in your head - here's another decision I'm happy I made
When I painted my Knife Block ( you can see all the different wording I used on it HERE )
But it works in the new black and white kitchen :) 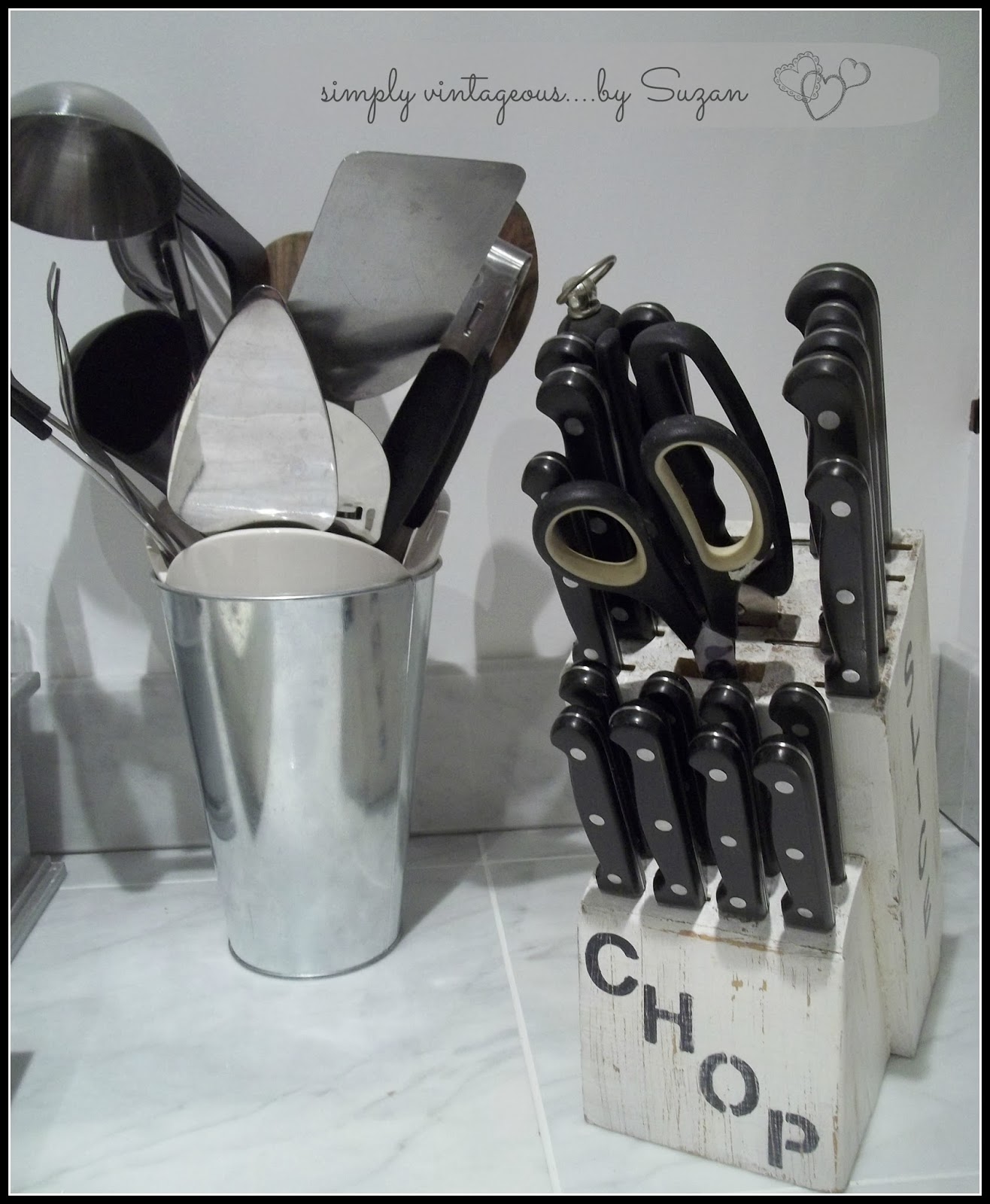 Oh and for those of you that suggested I paint out the original wood floor in a checker board pattern - the wood was not salvageable unfortunately - or I would have most definitely did just that !!!

You all have a wonderful Sunday - try to make sure it's a day of rest - and try to get the image of that
" horrid " floor out of your head.